‘That's Where We Look For a Shoulder to Lean On.’ How One South Carolina Pastor Is Combating Vaccine Hesitancy in Communities of Color

A healthcare worker administers a dose of the Pfizer-BioNTech Covid-19 vaccine to a staff member of the Clarendon School District at Manning High School in Manning, South Carolina, U.S., on Friday, March 12, 2021.
Micah Green—Bloomberg/Getty Images
By Madeleine Carlisle/Charleston, S.C.

As people arrive for their COVID-19 vaccine appointments, Pastor Kylon Middleton greets them in the lobby of East Cooper Medical Center in Mount Pleasant, S.C. on March 19 with a sticker on his lapel saying “I Got It!” The T in “It” is a syringe.

The event is the second COVID-19 vaccination drive organized by the recently-launched “I Got It!” public health education campaign, which aims to decrease COVID-19 vaccine hesitancy throughout communities of color in South Carolina. So far, the campaign has focused on historically Black settlement communities in the Charleston-area—some of which date back to the reallocation of land after the Civil War—and actively sought out individuals who lack access to computers or transportation. “I Got It!” has partnered its organizers with East Cooper Medical Center to pre-register and arrange vaccine appointments for eligible vulnerable populations.

Closing the Gap in Healthcare—a nonprofit that combats health disparities in Black and other underserved communities in South Carolina—recently launched the campaign in partnership with the Rotary Club of Charleston, the Charleston-based health analytics company ADoH SCIENTIFIC and Middleton himself.

Middleton’s involvement in the campaign is crucial, Closing the Gap in Healthcare’s founder Dr. Thaddeus Bell says. “The church has always been a source of inspiration,” he explains. “People trust the church. And they trust the pastor.” In South Carolina, where faith has historically played a central role in uniting communities, religious institutions may be crucial in the push to herd immunity. Some places of worship have been tapped by state officials to serve as vaccination hubs themselves. Others are working to regularly update their congregations on the rollout’s lastest developments.

Read more: These Moms Work as Doctors and Scientists. But They’ve Also Taken On Another Job: Fighting COVID-19 Misinformation Online

Bell, who is a practicing physician, has run radio ads throughout the state for the past 17 years aiming to combat the Black community’s documented distrust of the healthcare system that stems from a centuries-long history of mistreatment at the hands of medical professionals.

And building upon Middleton and Bell’s stature in their community, the “I Got It!” campaign has launched TV and radio spots in which the two men speak about getting the vaccine themselves and encourage others to get it too.

Henrietta Snype, a 69-year-old sweetgrass basket artist from the Four Mile settlement community, was among the twenty-five people attending the March 19 event. (Fifty people had been vaccinated during the first event a week earlier.) Organizers filmed her getting the shot and asked her to explain why she chose to get vaccinated; they’ll then distribute the video across South Carolina via social media, hoping to use the clip to spur others to get signed up in turn.

“I’m honored to spread the word,” Snype tells TIME. “I think a lot of people in the community did not know how to go about getting [the vaccine]… a lot of them don’t have the resources to get where they need to go.” (To work around this issue, the “I Got It!” campaign is recruiting organizers to go door-to-door and sign up people for the vaccine and later transport them to their appointments.)

Snype adds that she thinks churches must play an important role in the vaccine rollout, as they have in responses to previous disasters like hurricanes or floods. “People center around the church…. It’s like being at home,” she says. “That’s where we look for a shoulder to lean on.”

Americans of color have been disproportionately impacted by COVID-19 nationally, and are also underrepresented in the current vaccinated population. According to the U.S. Centers for Disease Control and Prevention (CDC), Black Americans are nearly two times as likely to die from the virus compared to white Americans, yet demographic data released by South Carolina officials in February showed white residents being vaccinated at twice the rate of Black residents.

This discrepancy is likely rooted in several factors. A February survey by ADoH SCIENTIFIC—which sampled 396 adults across South Carolina, North Carolina, Georgia, Alabama, and Tennessee—found that just 19.3% of Black respondents said they were “very likely” to get the vaccine, compared to 28.5% in a similar national survey conducted in January. “I don’t think the medical profession has been willing to accept and acknowledge that mistrust actually plays a major psychological role on African Americans and the underserved,” Bell says.

“I’m in the Black community. I know that vaccine hesitancy exists,” Middleton adds. “Culturally, in our community, when you talk about vaccines, there are certain things that come up that immediately invoke fear,” he continues. The U.S. has a long history of mistreating Black people through the medical system—a particularly infamous example thereof is South Carolina doctor James Marion Sims, often credited as the father of gynecology, who conducted many of his experiments on enslaved women without anesthesia—and medical racism continues in America to this day, furthering healthcare disparities that have only been worsened by the pandemic.

Middleton adds that he was nervous himself about getting the COVID-19 vaccine before learning about it more. “And when I got it, I recognized that it was my moral responsibility, it was my faith duty, to extend that message, preach that gospel, if you will,” he says.

While the “I Got It!” campaign is mostly active in the Charleston area at present, its organizers intend to expand statewide. Later this month they will specifically target Allendale, S.C., the poorest and least populous county in the state, says Tony Clarke, the director of outreach and development at Closing the Gap in Healthcare. There, data analyzed by ADoH SCIENTIFIC has signaled vaccine hesitancy and the existence of comorbidities are both especially high. In addition to TV and radio ads, the campaign is reaching out to trusted organizers and institutions in the community—particularly faith centers—to help distribute information on the vaccine.

Organizers also take the attendance at their first two events as indicators of things to come. They hope to soon vaccinate around 75 to 100 people per event, depending on supply, Clarke says, and have partnered with other medical clinics across the state to schedule appointments. And the more people they help get vaccinated, they reason, the more likely people around them will be to get the shot as well.

Read more: Too Many Americans Still Mistrust the COVID-19 Vaccines. Here’s Why

“And so if we can do that in every municipality, or every little community, particularly those that are most vulnerable and the underserved,” he continues, “then we would have successfully touched and reached the individuals who need it the most.” 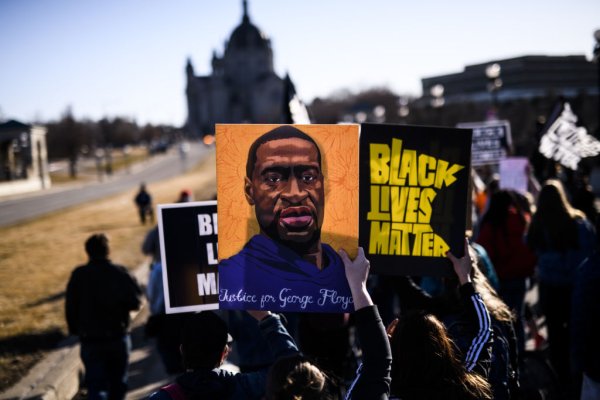 Chauvin Trial Set to Begin Over Death of George Floyd
Next Up: Editor's Pick