I Interviewed Hundreds of New Yorkers. Here's What They Taught Me

A scene-scape of New York capturing a woman passing by.
Mayita Mendez
Ideas
By Craig Taylor
Taylor, the editor of Five Dials, is the author of the new book New Yorkers: A City and Its People In Our Time.

In 2014 I was given a unique assignment: move to New York and talk to people, hundreds of them, and then somehow create a book using their words to describe the experience of living in New York right now. I spoke to New Yorkers in all five boroughs, in coffee shops, in pizzerias, in elevator shafts, on job sites. At one point, when the book was nearly finished, I began to recognize a by-product of the interviewing process. Something happens when you ingest so many stories from so many New Yorkers.

I learned a few things. I learned about express trains and egg creams, the route of the New York marathon and the strange naming protocols of the streets of Queens. I was taught how to steal a car in Manhattan, how to move properly on a sidewalk. Next came a list of specifics: best bagels, best pupusas, best baked clams (Donovan’s in Woodside). But I had no idea that speaking to New Yorkers would mean more important, subtle lessons would be shared from some of the most eloquent and generous people alive, lessons freshly-pertinent in our COVID-age: like why we should live in cities crowded with strangers who tend to breathe in our personal space, why it is important to truly see one another, and how to lead one’s life with compassion.

The interviewees also provided a masterclass in resilience. My book features seventy-five New Yorkers but I spoke to nearly 200 and heard stories of a resilience so bold it sometimes verged on the comical. New Yorkers have breaking points, sure. They would, I was told, leave the city if things happened, if things went wrong, but major events, not just terrorist attacks, financial crises, hurricanes or pandemics. Resilience was a learned skill. One interviewee told me how he’d perfected it clawing his way up off the streets, out of homelessness, out of sleeping bundled on the A train, and into a new life.

A scene-scape of New York capturing the shadow of a tree on passerby.
Mayita Mendez

One of the first things you learn while conducting interviews with New Yorkers is that the person you’re meant to be speaking to is not the only voice that will end up on the recorder. There is always someone else in the periphery, at the next table, listening in, waiting to inject another opinion. This is part of the richness. No matter that New Yorkers complain the city is not like it used to be, the multifariousness of human life is still unparalleled. In many cases interviews became interactive; the interviewee peered back at me. “So, what about you?” the Orthodox lice picker asked me as she went about her work. “Tell us about yourself.” For my previous book I’d interviewed residents of London. New Yorkers challenged me in ways Londoners never did. Race was not an afterthought or a submerged current; it was right there. “How is your white skin feeling today?” I was asked. “Who are you to ask me that question?” and “How do you expect to understand this as a white man?” and “No offense but ¿Cómo puedo transmitir lo que es esta ciudad a alguien que no es de El Salvador?”

By interviewing hundreds of New Yorkers I saw how many performance venues there are in New York. Way beyond Broadway, off- off- off- off-. New Yorkers made their own stages everywhere, any place where the great dramas of their own life could coincide with the dramas of their time. Here, I was told, your story didn’t have to be minor-league—your life was enmeshed with the ongoing saga. Some described a stage like Shea when the Mets won in ’86, or lying down in the middle of Wall Street when the ACT UP protests erupted in ‘87, or occupying the Williamsburg bridge in the BLM protests 33 years later. You could be part of a choral voice that echoed in the stadiums and canyons. A lawyer told me he needed New York state courts because, unlike federal courts, he was allowed to pace in front of a jury. He could move across his stage. A subway dancer told me he needed the A train as a stage to create his own story, his dance moves comprised a living sentence that ended with full stop when his sneakers finally hit the floor. These stages allowed New Yorkers to enlarge, aggrandize, become as large as they needed to be.

I learned that every profession was just that little bit different in New York. The pandemic had, of course, changed everything, including the skills needed to work behind a bodega counter. But no job here was like elsewhere. Sure, I was told by one legendary NYC tour guide, the tourists might get batteries thrown at them from certain high rises. But wasn’t that a life lesson in itself? I learned elevator repair in New York was truly the big time, as was nannying for the New York rich. But that’s why you did it. “You can watch Niagara Falls on TV,” a cop told me, “but don’t you want to get on the Maid of the Mist? Don’t you want to feel the mist on your face?” You worked with the stuff of the city. You pressed hard, left your name and departed. You learned what you could before your New York time was up.

A scene-scape of New York capturing a young boy walking by.
Mayita Mendez

It wasn’t just the adults. I learned how New York forges its children. One teenager left New York for college and encountered the children of the Midwest, most of whom looked to have been wrapped in cotton wool their entire lives. New York was like that: a great breaker of silos. We’re encouraged daily to leave our own silos. Change your Facebook feed or live in New York and engage. Whoever you are, I was told, your “other” is here. That’s the beauty. “I’m afraid of the other,” a nanny said to me, “we all sort of are—but you expose yourself naturally, gradually, and have positive experiences and you grow out from that.” And that exposure can only happen in the rush, the proximity to strangers, all that New York affords and all that’s been temporarily taken from us—sharing, listening, overhearing, the good kind of exposure.

In New York, the top note is individuality, but I heard again and again about a collective compassion, including in the account of a subway conductor who described exactly how his passengers looked out for each other, again and again.

And what about my interviewee who clawed his way out of homelessness? He taught me these skills are transferable. Over the course of the pandemic he has assured me that what he learned in New York prepared him well: Get by, survive, stick out the loneliness, have faith in the city. NY will always be there. “You know what?” he said to me recently. “If you want to learn more, you can come back any time.” 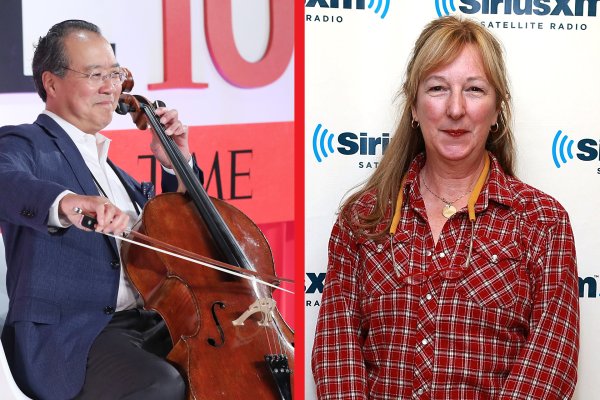 Sandra Boynton and Yo-Yo Ma in Conversation With a Kid Reporter About Their New Collaboration Jungle Night
Next Up: Editor's Pick