Residents of D.C. rally for statehood near the Capitol in Washington on March 22, 2021.
Drew Angerer—Getty Images
By Philip Elliott

For anyone who has been in Washington for more than a minute, the arguments for statehood are well-worn territory.

Residents of Washington, D.C., pay the highest per capita tax rate in the country. We contribute more to the federal tax rolls than 22 other states in terms of raw dollars but have no say in how those funds are spent. There are more people in D.C. than either Wyoming or Vermont. Washingtonians’ voting power in Congress? Zero. The District has no voting Senators, and no Representatives in the House. The President and the Senate pick our local judges, the Justice Department runs our police force, our city budgets require Congress’ approval.

The frustration is tangible. In 2016, 86% of D.C. voters approved a non-binding referendum to become the 51st State — which until 2017 also happened to be the name of a great dive bar over by George Washington University’s campus. Our default license plates literally carry the message: “End Taxation Without Representation.”

All of which is part of today’s hearing in the House on D.C. statehood, which has grown from parochial local interest into a national priority for Democrats. There are legitimate and sincere reasons to consider a system that is designed to deny the political clout of a city whose population is historically Black, and where 47% of residents are Black today. For some, the lack of representation for these voters remains unfinished work of the Civil Rights movement, and the statehood question drew a renewed sense of urgency during last year’s reckoning over racial injustice.

But D.C is also among the bluest in the country. A staggering 92% of D.C. voters cast their ballots for Joe Biden last year.

Which is why it’s almost impossible to imagine Republicans going along with plans to give Washington two votes in the Senate, one in the House and another three in the Electoral College. Statehood would be a unilateral gift to Democrats in a Senate that is at the moment evenly divided and a House that is within reach for the GOP next year. In the Capitol that just advanced a popular pandemic-relief package approaching $2 trillion without a single Republican vote, it’s unimaginable that 10 GOP Senators who would unilaterally give their opposition more power, no matter the moral arguments.

History is clear that the early plans for Washington didn’t really mean for people to live here. It was a federal district meant to administer the government that counted only the votes of white men who owned land. Obviously, things have changed over time. D.C. is the primary home of more than 700,000 residents, and it’s pretty clear the founders’ dreams of having a weak federal bureaucracy have slipped into fantasy.

As a stand-alone state, D.C. would have the most highly dense population anywhere in this country, carry the highest per capita GDP and highest median household incomes. Permanent Washington is here to stay, even if the residents knowingly stay or come anew with the understanding that they’re second-class Americans, subject to every federal requirement but with reduced rights.

Democrats have rightly framed this as an issue of justice. “This is not about politics. It’s about a fundamental voting and civil rights issue,” House Oversight Chair Carolyn Maloney said. The hearings today culminate a decades-long effort to make this more than something that The Washington Post covers in its Metro section. It’s a real issue, with Biden openly supporting statehood as his two Democratic predecessors had also done and a year of protests for racial justice changing minds.

But while it has strong local support, national polls show it to be a non-starter. Under the current rules of the Senate, statehood would need 60 votes for the debate to even move forward. Four members of the Democratic caucus aren’t exactly championing this cause: Democratic Senators Joe Manchin, Kyrsten Sinema and Mark Kelly and independent Democratic-ally Angus King have all signaled reticence toward such a move. Even if they all got onboard, with Democrats holding 50 seats, they’d still need at least 10 Republicans to join. (It would take some funky math and absences to have Vice President Kamala Harris as a tie-breaker on this one.)

The cold reality of Washington’s statehood push is that another bill will probably clear the House, as it has before, and it will then stall in the Senate, where no amount of lobbying is going to unilaterally move Republicans to cede power. For years, Republicans have cast statehood as a naked power-grab. And Democrats, for their part, have allowed the opportunity to make this happen slip past them even when they had 60 votes to do it. Absent consequences, there’s little reason for the folks who work at the Capitol — and many of the staffers who call D.C. home — to move on this. 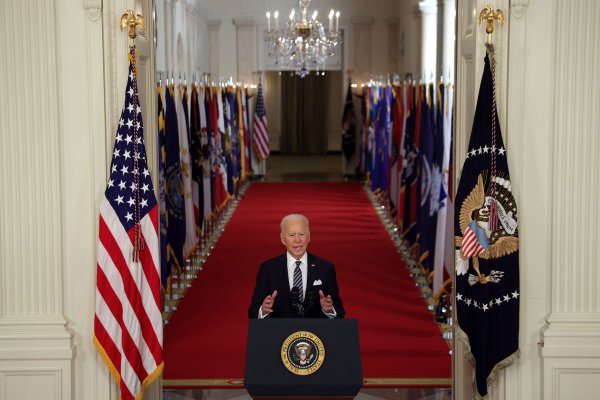 Biden’s First Primetime Speech Shows the Limits of Optimism
Next Up: Editor's Pick