Rockets are built slowly—slowly and exceedingly carefully—which is in keeping with giant machines on which humans stake their lives and nations stake their prestige. In NASA’s cavernous Vehicle Assembly Building at Cape Canaveral, America’s next great moon rocket—the Space Launch System (SLS)—is being constructed with all that in mind. It is here too that TIME set up half a dozen cameras over the course of two months, capturing 3 million images for a time-lapse video that makes it possible to compress those months of work into just a few kinetic minutes.

Under the eyes of the cameras, the rocket’s twin solid-fuel boosters came together—each of them 177 feet tall, weighing 1.6 million pounds and generating 3.6 million pounds (1.6 million kg) of thrust. Twenty-five percent taller than the solid boosters on the space shuttle, the twin engines are made of five separate segments, compared to the shuttle’s four. When they are completed, they will be attached to a central rocket towering more than 33 stories high. Taken together, the entire SLS will be nearly as tall as the celebrated Saturn V, which launched nine crews to the moon in the 1960s and 1970s, and will generate 8.8 million pounds (four million kg) of thrust—significantly more power than the Saturn V’s 7.5 million. It will easily be the most powerful rocket ever built.

A rocket this big does not come cheap. Developing both the SLS and the ground systems that will support it will cost $11.5 billion, NASA says. And this is for a rocket that, unlike the space shuttle or the reusable boosters built by SpaceX, will be flown once and thrown away. According to a 2019 estimate by the Office of Management and Budget, the cost of building and flying a single SLS will reach $2 billion. With alternatives available on the private market—both SpaceX and United Launch Alliance build heavy-lift rockets—many skeptics have questioned why so budget-busting a booster is needed at all. NASA answers that while the private rockets may have muscle, they don’t have as much as the SLS. The Falcon Heavy’s liftoff thrust, for example, is 5 million pounds (2.25 kg). That makes a difference, since it may take two launches of a Falcon Heavy to lift as much payload as a single SLS, significantly cutting into any savings from a switchover to private rockets.

Then there is the principle of sunk costs. When you’ve spent north of $11 billion to get something built, it’s much harder to scrap the work and junk the hardware than it is when you’re early in the development phase. No one suggests that NASA is imprudently rushing the SLS, but no one denies that with every bolt that’s turned and with every meter the rocket grows, it becomes harder to throw it all away. That, at least, should ensure the ongoing assembly and completion of the single SLS now under construction. With the Biden Administration having voiced its support for NASA’s plan to have astronauts back on the moon in this decade, SLS partisans are at least cautiously optimistic that there will be more rockets to follow.

Work will continue on the SLS through this summer and into the fall. Then, it will at last be rolled out to the launch pad in preparation for an uncrewed test flight around the moon at the end of this year or the beginning of next. If things go as NASA promises they will go, the SLS will begin carrying women and men to the moon by 2023—marking the first time humans have left low-Earth orbit since 1972. The liftoff should be thunderous—rattling windows and shaking loose plaster in nearby buildings as the Saturn V once did—and the lunar journeys should be wondrous. For now, the work in the Vehicle Assembly Building continues—as the moon lies patiently waiting. 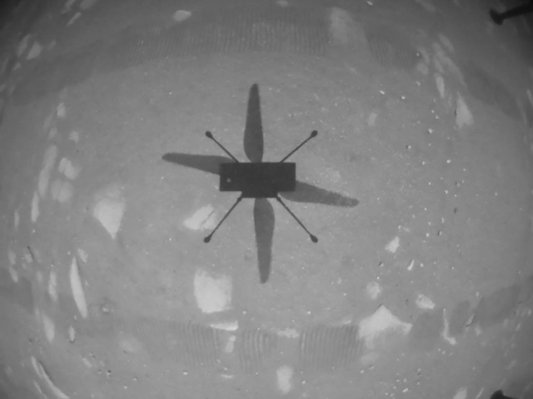 How NASA's Mars Helicopter Flight Opens the Door
Next Up: Editor's Pick