Already Reeling From a Year of the Pandemic, Asian American Business Owners in Atlanta Are Despairing After an Attack on Their Community

Thip Athakhanh says her approach to facing racism used to be to “shrug it off, be silent and continue to move forward.” A chef who owns the Lao restaurant Snackboxe Bistro in Doraville, just outside Atlanta, Athakhanh typically took the occasional name calling and condescension she would receive in stride, and avoided publicly voicing her opinion on issues related to Asian hate out of fear of retaliation that could harm her business or employees’ livelihoods.

“As a restaurant owner, as an Asian woman, we always try to remain neutral,” she says. “I don’t want to try and draw attention to myself that would risk the business.”

But the Atlanta spa shootings—in which a lone gunman drove across Atlanta to three businesses, killing eight people, six of them Asian women—completely changed Athakhanh’s perspective. “I nearly shut down; it was an agonizing feeling,” Athakhanh says about hearing the news. “Those [victims] could have been my mother, my sister, my friend.”

In the days since the shootings, Athakhanh has taken actions both personal and communal: she brought a gun to her restaurant for the first time in years, bought mace for female employees and changed safety protocols for all staff. She provided refreshments for those who marched at Saturday’s solidarity rally in Atlanta and is helping to organize a fundraising initiative with other Asian women-owned businesses selling meal boxes with 100% of proceeds going to victims’ families.

“I nearly shut down; it was an agonizing feeling,” Thip Athakhanh says about first hearing the news of the killings. “Those could have been my mother, my sister, my friend.”
Arvin Temkar for TIME

And she’s not the only one: across the metro Atlanta area, many other Asian American business owners who are deeply shaken by Tuesday’s events are grappling with how to move forward in a year that has seen both a sharp decline in their businesses, driven by the COVID-19 pandemic, and a steep rise in violence against Asian Americans.

“We saw businesses impacted with decreased revenues, racist comments, being attacked and bullied,” says Lily Pabian, executive director of nonprofit We Love BuHi, which advocates for local immigrant and BIPOC businesses in Atlanta’s Buford Highway as part of its mission to preserve the area’s multicultural identity. “We started seeing some light at the end of the tunnel … and then something like this happens. We need to raise awareness because it can happen in Atlanta—and it did.”

Asian Americans are one of the fastest-growing populations in the greater Atlanta area; their numbers in Gwinnett County more than doubled between 2000 and 2020, according to the New York Times. Atlanta’s Asian population is a diverse mix of nationalities, with Indian, Vietnamese, Chinese and Korean communities spread throughout the city, including in areas like Johns Creek City and Duluth. These populations are also economically diverse; many communities run or work at family-run establishments like restaurants, nail salons, spas and green grocers.

The people who spoke with TIME or this story are by no means a monolith, and not all communities have experienced the same treatment. Some people said they encountered very little racism in their time living in the Atlanta area. But many others said Tuesday’s attacks were a gruesome extension of the racism they have felt for decades. Jason Chang, who runs the Man Chun Hong restaurant in Doraville, is ethnically Chinese but was born in Korea; he arrived in Georgia at age eight. “I grew up fighting, in school and after school. Speaking to a lot of my friends, they grew up fighting too,” Chang says. “That’s the society we grew up in: You have to fight and win to survive. If you don’t win, you’re always gonna get picked on and you’re gonna get called ‘Chink, slant-eyed, gook.’”

"The coronavirus pandemic affected everyone. It didn’t only affect this country," Ching Hsia says. "As a country, we should all come together, try to make it better... instead of having all this hatred, pointing fingers, trying to find a scapegoat and blaming someone."
Arvin Temkar for TIME

Chang says people don’t usually target him anymore—but that his wife, who is not as fluent in English, is still verbally targeted in public places like shopping centers. “They feed on the weak people who speak broken English,” Chang says. “They mock you.”

Asian Americans in service industry jobs are potentially extra vulnerable to this type of mistreatment, with customers viewing them as service providers instead of as humans. Mylinh Cao, who owns Dua Vietnamese Noodle Soup close to the city’s center, says that name calling and suspicious looks have been part of her life since she arrived in the U.S. at 17 months old as a refugee of the Vietnam War, including times when she’s stood behind the counter at her restaurant. In one incident a few years ago, she says two patrons became incensed when she refused them a refund on their mostly-eaten meals. “They made threats, cursed me out,” she says. “There was a lot of name-calling, calling me an ‘Asian bitch,’ saying, ‘go back where you came from.’”

Cao said that the other patrons in the shop did nothing to intervene. “I’m alone, basically,” she says. “No one is gonna stand up for me, especially if I’m in a group setting.”

And business owners say these dynamics have only worsened during the pandemic, as xenophobic language that emphasizes the coronavirus’s Chinese origins has been spread by those in positions of power, including former President Donald Trump, who has made multiple racist and derogatory comments about the virus and Chinese people. Ching Hsia, whose family has owned the Chinese restaurant Yen Jing for three decades, says that over the past year, they’ve received phone calls asking if they served bat soup or had the virus. One person asked: “Why do we have to wear a mask when you guys brought it over?” Another yelled at Hsia: “I don’t know how you can wear (a mask), because Trump is going to get all your asses out of this country.” She recalls freezing up in the moment and wishing she had said something back.

“Asians are being affected by the pandemic itself and on top of that they’re also being blamed for the cause of the pandemic and it’s very unfortunate,” Sunghee Kim, pictured here with husband Jun Kim, says.
Arvin Temkar for TIME

Sunghee Kim, who runs L&M Market with her husband, always felt welcomed by her regular customers but says she’s noticed an influx of unfamiliar, unfriendly faces since the start of the pandemic. In various instances, she says, customers have called her “coronavirus,” interrogated what her nationality was and spat on the store’s floor. “Asians are being affected by the pandemic itself and on top of that they’re also being blamed for the cause of the pandemic and it’s very unfortunate,” Kim says.

‘A lot has changed in one day’

On Tuesday night, Jason Chang was at his restaurant, Man Chun Hong, preparing orders when a friend texted him about the shootings. “It gave me chills,” he says. “They were going to places to kill Asian people, so nobody’s safe, right? What am I supposed to do?”

The next morning, many Asian business owners grappled with the question of whether or not to report to work. Grace Wang, the manager of Spa 18 Massage, which is a 15-minute drive from two of the spas where the attacks occurred, decided to close for the day. “Everybody is afraid,” she says. “All employees are worried to come to work, and customers too and we decided to close until we find out what happened.”

But others felt like they didn’t have the option of closing, even for one day. Seungmin Lee, the owner of Hello Chicken in Doraville, says that business is down 25% compared with pre-pandemic numbers, forcing her to put almost her entire staff on leave. “From the last year, I’m struggling,” she says. “I’m working hard to survive to stay open right now.”

So Lee, who is Korean and whose family moved to Atlanta from Seoul in 1991, opened for business the next morning, and spent a nerve-wracking day anxiously waiting behind the counter alone; no dine-in customers came in to join her. “I was the only one in the whole place. I was worried, maybe I can get shot too,” Lee said. “When I left to go home, I was checking my CCTV before I got into my car.”

Mylinh Cao says that name calling and suspicious looks have been part of her life since she arrived in the U.S. at 17 months old as a refugee of the Vietnam War. “No one is gonna stand up for me, especially if I’m in a group setting," she says.
Arvin Temkar for TIME

Athakhanh, the Snackboxe Bistro owner, says the shootings have transformed how she views her own safety and the safety of her business and family. “A lot has changed in one day for us,” she says, noting she plans to train staff to look out for signs of danger and no longer keep the backdoor unlocked for deliveries. Vendors will now have to call in advance to say they have arrived. “The three years that I’ve been open, we have never discussed the safety contingency plans with our staff and we’re going to have to have this discussion.”

While the specific steps business owners take toward ensuring safety differ, many who spoke to TIME say that Tuesday’s shootings were a tipping point that will cause them to think differently about encountering racism and to be more vocal. “We tend to not speak of what we are going through: Maybe it’s just within our culture,” Trang Tran, a co-owner of Nails Couture in Griffin, says. “We should stand up and speak.”

Athakhanh reflects on an encounter she had in Alabama 30 years ago outside a fast food restaurant, when a man approached her and her father and shouted a racial slur at them. “My father said ‘thank you.’ I know he’s a very smart man, I know he knows what those words meant—but he chose to ignore it, mind his business and keep going,” she says. “That was the mentality that I had growing up. But I think times have changed for us. I think we reached our breaking point.”

And Lee, the owner of Hello Chicken, wants to be involved any way she can. “If I say, ‘Oh, maybe someone else will go,’ and if everyone thinks that way, then no one’s going to come to campaign,” she says. “Even though I’m a one, just a little amount, I have to be there to support the Asian community.”

-With reporting by Anne Most, Erica Lee/New York 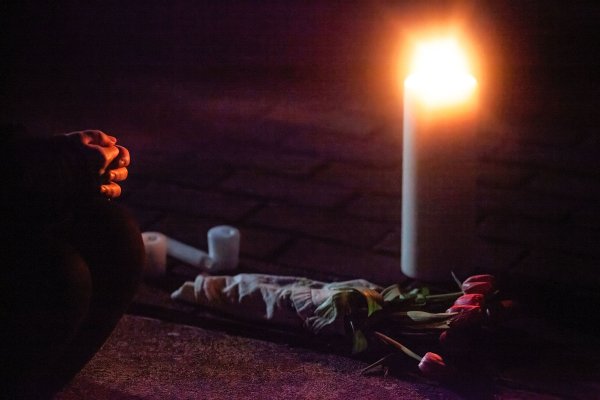 My White Parents Struggled to See Me as Asian
Next Up: Editor's Pick