Listen to the Sounds of NASA's Perseverance Rover Driving on Mars

You wouldn’t think sound could travel very well on Mars—what with the planet’s bare wisp of an atmosphere, which is just 1% the thickness of ours. Yet if you could stand without a spacesuit on the Martian surface (not advised) you’d actually hear plenty. That fact has already been confirmed by the Perseverance rover, which landed on Mars on Feb. 18 and, using a microphone attached to a mast that holds a camera, has picked up sounds of the stirring of the wind and the ticking of its on-board laser as engineers test-fired it. (The laser is used to vaporize bits of rock which the rover can then analyze with its spectrometer.)

Now, NASA has used a second microphone to record a much more evocative sound: the turning of wheels and the crunching of gravel as Perseverance rolled its first 27 m (90 ft) on the surface of the Red Planet. The rover moves slowly—so slowly that the little trip took 16 minutes, which makes for fascinating if admittedly labored listening. But NASA also released a cleaned up, 90-second version which filtered out a persistent squeaking sound—one that engineers think could be caused either by the movement of the wheels or electronic interference with some of the rover’s instruments.

“If I heard these sounds driving my car, I’d pull over and call for a tow,” said Dave Gruel, a lead engineer, in a statement that accompanied the release.

The Martian sound effects come courtesy not of a purpose-built, extra-special interplanetary microphone, but from a simple, off the shelf model that was originally included to capture the sounds of the spacecraft’s descent and landing, but continues to function. In the event anybody in the rover’s vicinity calls out a hello, the mic will surely capture that, too. 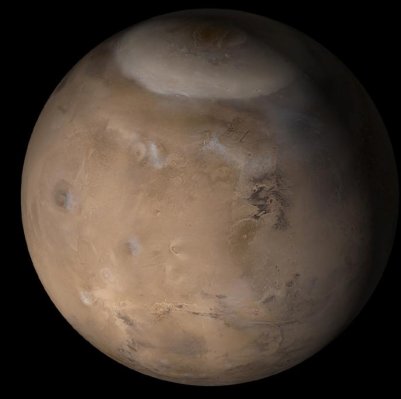 Mars Has Much More Water Than Previously Known—But There's a Catch
Next Up: Editor's Pick