(Miss this week’s The Leadership Brief? This interview below was delivered to the inbox of Leadership Brief subscribers on Sunday morning, March 27; to receive weekly emails of conversations with the world’s top CEOs and business decisionmakers, click here.)

Michael Saylor’s transformation into a corporate Bitcoin evangelical started prosaically enough. He’s the CEO of a publicly traded enterprise-software firm, MicroStrategy Inc., and with $482 million in 2020 revenues and business steady but expenses down because of COVID last year, cash reserves started piling up. Like many in the Bitcoin-verse, Saylor has a profound unease about central banks propping up economies with cheap money; by his calculations, the increase in the monetary supply devalues the dollar by 15% a year. He refers to cash as “trash” and a “melting ice cube.” Bitcoin, on the other hand, is “digital gold.” In August, Saylor took the unorthodox step of moving a portion of his company’s treasury reserves into Bitcoin, buying 21,454 bitcoins for $250 million. MicroStrategy continued buying, and in February it added 19,452 bitcoins for $1.026 billion, bringing its total holdings to 90,531 bitcoins. Current value: $5 billion. The company’s stock has soared in response, closing on March 16 at $724 per share, up from $107 a year ago.

But it was a casual Twitter exchange that solidified Saylor’s position as a crypto-guru. (Cryptocurrencies like Bitcoin are digital, decentralized forms of money.) In December, Elon Musk tweeted a slightly risqué image of a Franciscan monk, eyes cast heavenward, hands clasped in prayer, trying to resist the sultry allure of Bitcoin. Saylor replied to Musk that he should do Tesla shareholders “a $100 billion favor” and convert Tesla’s balance sheet from dollars to Bitcoin. Musk responded, “Are such large transactions even possible?” To which Saylor replied, “Yes, I have purchased over $1.3 billion in #BTC in past months & would be happy to share my playbook with you offline – from one rocket scientist to another.” (Saylor, 56, has dual degrees in aeronautics and astronautics from MIT.)

On Feb. 8, Musk’s Tesla disclosed that it had bought $1.5 billion worth of Bitcoin using cash on its balance sheet and said it would begin accepting digital coins as payment for its products.

Saylor joined TIME on March 16 for a video conversation about his efforts to persuade large corporations to add Bitcoin to their financial toolboxes.

(This interview is edited and condensed for clarity.)

Inquiring minds demand to know: Did you speak directly to Musk beyond your Twitter exchange in December?

Do you think that Twitter exchange had an impact on Tesla’s decision?

And are you in ongoing contact with said CEO?

I said, I can’t really comment on a conversation I would have with a public-company officer.

Why not? The SEC does not prohibit such disclosures.

It’s not appropriate business decorum. [Musk could not be reached for comment.]

Tesla’s such a maverick company. Are we seeing other indications that institutional investors are getting more involved in the crypto craze?

If you go back to March 2020, it was only the rare institution involved. In the 12 months that followed, there’s been an avalanche of institutional involvement. MicroStrategy is the first publicly traded company that made a material investment, but Square followed. And Tesla followed. But they’re the tip of the iceberg. We did a “Bitcoin for Corporations” summit in February. I thought it would be a couple of thousand people showing up. It ended up being more than 10,000 a day, and it broke our video server.

What was the impact of the move by Tesla?

It was an inflection point. All of a sudden, the narrative goes from “Those crazy people, what are they thinking, speculating in Bitcoin?” to “Maybe this is a real thing. This is probably not going away. Let’s try to figure out how to think about it.”

I’m going to read Nobel Prize winner Robert Shiller’s quote about irrational exuberance. “Irrational exuberance is the psychological basis of a speculative bubble. I define a speculative bubble as a situation in which news of price increases spurs investor enthusiasm, which spreads by psychological contagion from person to person, and, in the process, amplifies stories that might justify the price increase and brings in a larger and larger class of investors, who, despite doubts about the real value of the investment, are drawn to it partly through envy of others’ successes and partly through a gambler’s excitement.” Is Bitcoin not a textbook example of irrational exuberance?

No, it’s the opposite. It’s a textbook example of a rational action in response to monetary inflation. Can we agree that the money supply is expanding in an unprecedented fashion the past 12 months everywhere in the world? If you’re going to make a rational investment decision today, whether you’re a real estate investor, a stock investor, a bond investor, or just a wage earner or you’re a treasurer, you have to estimate the rate of monetary expansion for the next eight years. We know there’s a commitment to run deficits, and we know this commitment to stimulus.

So now the issue is, What’s a rational behavior? I’ve got to find a store of value. If you’re looking for an example of real speculation, it would be people speculating upon whether they can squeeze others in a short squeeze and a small stock, like GameStop. Bitcoin is not speculation, O.K.? Bitcoin is a unique new technology, it’s like the Facebook of money or the Google of money. And it grew from nothing to a trillion dollars in monetary value in 12 years.

For people who aren’t early adapters, why is there a whiff of something vaguely unsavory about Bitcoin? Some of these remarks go back a few years and have since been revised, but Warren Buffett called it “rat poison squared”; Jamie Dimon, a “fraud”; and Larry Fink of BlackRock said it was “an index of money laundering.”

I just think it’s a paradigm shift, so you can’t blame smart people. They’re all smart, and they were all successful. But if you go back and you look at electricity, not every smart, successful person immediately understood the implications of electricity in the first 24 months after they heard of it. [Philosopher] Thomas Kuhn said when you come up with a new paradigm, a completely utterly revolutionary way to see the world, the establishment doesn’t normally accept it. And you need a new generation to accept that unless there’s a war, unless you have an extreme experience that forces you to embrace a new idea.

It’s a little early to talk about history, but what so far is your legacy?

We are the first public company to actually adopt Bitcoin as a treasury reserve asset, to legitimize the asset class as an institutional-grade safe-haven asset.

My mission right now is to fix the balance sheets of the world. 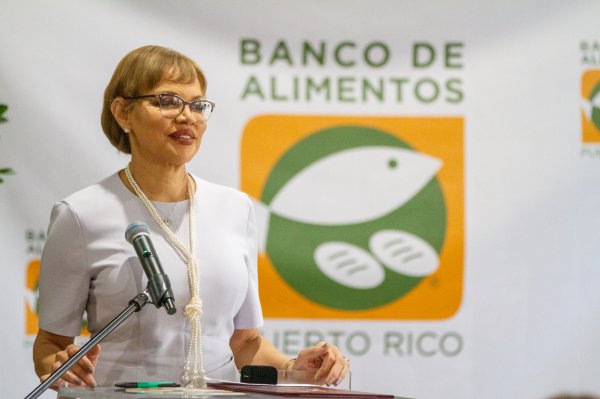 Feeding America CEO Claire Babineaux-Fontenot Has a Plan to End Hunger in America
Next Up: Editor's Pick