German Chancellor Angela Merkel arrives for the weekly meeting of the cabinet in Berlin, Germany on March 17, 2021.
Florian Gaertner—Photothek/Getty Images
Ideas
By Ian Bremmer
Bremmer is a foreign affairs columnist and editor-at-large at TIME. He is the president of Eurasia Group, a political-risk consultancy, and GZERO Media, a company dedicated to providing intelligent and engaging coverage of international affairs. He teaches applied geopolitics at Columbia University’s School of International and Public Affairs and his most recent book is Us vs. Them: The Failure of Globalism.

On Sept. 26, Germany’s year of political change will culminate with the election of a new Chancellor, an event that will close the remarkable 16-year tenure of Angela Merkel. For Merkel’s Christian Democratic Union (CDU), the election year is off to a rough start.

Early March saw the first two of six regional elections in 2021. CDU candidates won less than one-quarter of the vote in the wealthy southwestern state of Baden-Württemberg and less than one-third in neighboring Rhineland-Palatinate. The results were the worst since the end of World War II for the party in each state. That outcome might well upend the race for Germany’s next leader. Later this spring, 1,001 party delegates will vote on whether Armin Laschet, Merkel’s chosen successor, or Markus Söder, head of its smaller Bavarian sister party the Christian Social Union (CSU), will be the powerful coalition’s joint candidate for Chancellor. If delegates choose unwisely, they risk a September national vote that yields a new coalition government composed of the center-left SPD, the increasingly popular Green Party and the fiscally conservative Free Democratic Party (FDP)–with the CDU-CSU coalition locked out in the cold.

The CDU is vulnerable. Laschet is likable but not a charismatic or forceful candidate, and he has low poll numbers. Yet the party has deeper problems. Merkel’s government now faces a third wave of COVID-19 at a time when public frustration with tight lockdowns remains high and both vaccines and economic help are slow in coming. Add political scandal. Revelations that two lawmakers, one CDU and one CSU, had earned hundreds of thousands of euros last year in business deals involving personal protective equipment have made headlines.

Post-Merkel, Germany looks increasingly up for grabs. That’s important news for anyone who has appreciated the Chancellor’s formidable leadership. Merkel’s political skills and steady hand have been critical for Europe. Her “We can do this” response to the migrant crisis of 2015–16 won her bitter criticism from many quarters. In response to the pandemic, Merkel swept aside traditional German resistance to common European debt and won support for a €750 billion E.U. fund to boost Europe-wide recovery and growth. She led the way toward a long-sought E.U. investment deal with China. She pushed to make E.U. climate policy more ambitious. She persuaded the resistant governments of Poland and Hungary to accept rule-of-law provisions in E.U. budget rules.

What does Merkel’s exit mean for Europe? Certainly, Germany will remain fully committed to the E.U. project. If the CDU-CSU coalition can’t form the next government, a center-left-led coalition will continue support for European integration. But if that coalition involves the FDP, Germany’s government may again become less willing to spend whatever it takes to manage the next E.U. crisis. A turn back toward belt tightening might well stall Europe’s pandemic recovery.

Merkel’s departure will make France’s Emmanuel Macron Europe’s most important leader. That means less concern for the health of E.U. relations with the U.S., greater skepticism of the value of NATO, a more confrontational attitude toward Turkey’s Recep Tayyip Erdogan and a more interventionist approach to the Middle East and North Africa. In short, it means a significant change in European leadership on the E.U.’s role in the world.

How that plays out for the E.U. remains to be seen, but there is nothing good about so much political uncertainty inside Europe’s most powerful country. 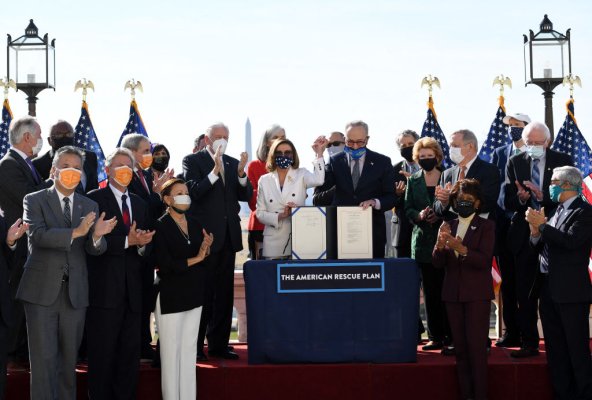 Fight Against Child Poverty Takes A Big Step
Next Up: Editor's Pick