London Police's Treatment of Women at a Vigil Prompted Fury. Campaigners Say a Reckoning Is Overdue

On Saturday, many women, and some men, gathered at Clapham Common, south London, for a vigil to remember Sarah Everard, a 33 year old marketing executive who disappeared in the area during her walk home on March 3. Her body was found a week later, and on March 12, a serving officer with London’s Metropolitan Police was charged with Everard’s kidnap and murder. Those attending Saturday’s vigil laid flowers, notes and cards in remembrance of Everard at the Common’s bandstand. “There was a really beautiful atmosphere of solidarity, rage and sadness,” says Olivia, a member of Sisters Uncut, a direct action feminist group who was present at the vigil.

But when the sun went down, attendees say the mood changed. Videos that later circulated on Twitter showed police snatching women at the bandstand, and a series of photographs in particular showed one woman pushed to the ground by police officers. Three young women in the bandstand were pinned down by multiple male officers, according to Black Protest Legal Support, a group of Black and brown lawyers whose legal observers were present at the vigil and said police tactics were “violent, aggressive and intimidating” in a statement shared with TIME. “It’s sickening given that women had just come together to grieve a woman who had allegedly been killed by a police officer. And then the police felt that they had the right to brutalize the women who had gone to Clapham Common that day,” Olivia, who used a pseudonym, tells TIME.

Met Police Commissioner Cressida Dick defended the police’s widely-criticized response to the vigil by saying that concerns over the spread of coronavirus amid the “really big crowd” led to officers to become involved. The police’s actions at the vigil prompted fury across the country, and across the political spectrum in the run up to the U.K. lawmakers voting to pass a controversial bill Tuesday that will expand policing powers.

And while Everard’s death has ignited a national conversation over the threats and violence that women face, the behavior of police towards attendees at the vigil has prompted widespread fury and outrage, adding to calls for abolition and institutional change within the police. “It has shined the light on the concerning, long term problem in policing and how public order policing operates in this country,” says Rosalind Comyn, campaigns manager at human rights organization Liberty. Campaigners say Saturday’s events are part of a history of police and government crackdowns on protest in the U.K., with particularly worrying trends over the past year during coronavirus restrictions. “This is part of a wider range of attacks that we’re seeing on the mechanisms that we have to hold the people in power to account,” says Comyn.

Why London police are under fire over Saturday’s vigil

The vigil’s organizers, a group called Reclaim These Streets, had been told by the Metropolitan Police late last week that the event could not go ahead due to coronavirus restrictions. The group canceled the event, although hundreds of others, including Sisters Uncut, which has been holding similar remembrance events in recent years, decided to attend anyway. For Olivia, the event was both a protest to speak out against injustice and a vigil to grieve a death. “Both of those things apply to the situation, because actually, it’s very difficult to see Sarah’s death outside of the context of the extreme level of violence against women in our society.”

Attendees and eyewitnesses posted on social media about their heavy-handed treatment by police officers, who in some cases were standing and shouting in close proximity to attendees, elbowing other women in the face, and trampling over the flowers that had been left at the bandstand. The Met said four people were arrested for public order and coronavirus regulation breaches.

Prime Minister Boris Johnson said Monday that he was “deeply concerned” by scenes from Saturday, and that Home Secretary Priti Patel has instructed the police watchdog to “conduct a lessons learned review into the policing of the event.” Despite calls for her resignation, Metropolitan Police Commissioner Cressida Dick defended officers, saying she is “more determined” to lead the force and pushing back against “armchair critics” who condemned the police’s behavior.

‘A wake up call as to what police brutality looks like’

Campaigners say this is part of a much longer history of over-policing at protests, and part of a culture of institutional violence against women within the force. “I think that certainly there are a lot of people for whom this is a wake up call as to what police brutality looks like,” says Rosa, who used a pseudonym and is a representative from Abolitionist Futures, a collaborative movement of community organizers and activists. “Anybody who then cares to look at history can see that actually, this form of policing has been run of the mill and completely standard, not only at many protests from many different communities over a long time, but in daily life for many communities in the U.K.”

Between 2015 and 2018, almost 700 cases of alleged domestic abuse involving police officers and staff were reported across the U.K., and in the six years between 2012 and 2018, nearly 1,500 accusations of sexual misconduct, including sexual harassment, exploitation of crime victims and child abuse, were made against police officers in England and Wales. A 2019 report by the Bureau of Investigative Journalism found that police are treated differently when they are accused of abuse — just 3.9% of reports about alleged abuse by police in England and Wales ended in a conviction, compared with 6.2% among the general population. “We can see that the police are not capable or not willing to deal with this issue within their own ranks, and police do not keep women safe,” says the Sisters Uncut member.

Assistant Commissioner Louisa Rolfe of the National Police Chiefs Council (NPCC), which coordinates policing activity across the UK, acknowledged that “abusers can seek professions affording them power and control,” and said the vast majority of serving police treat allegations professionally and appropriately. “All forces have a dedicated team which investigates complaints against officers. These departments work to strict guidelines, run confidential reporting phone lines for both the public and colleagues to raise concerns and are regularly independently inspected.”

Well-wishers, gathered for a planned vigil for Sarah Everard in Clapham Common, south London, turn on their phone torches as the event was cancelled after police outlawed it due to Covid-19 restrictions on March 13
Justin Tallis—AFP/Getty Images

The police have also come under fire for disproportionate policing of Black and ethnic minority communities at protests, in prisons and in daily life, as well as the way it has handled and investigated the deaths of Black people. Figures for 2019-2020 showed that Black people are nine times more likely to be stopped and searched by police than white people. (While describing the practice as a “valuable policing tool,” NPCC Deputy Assistant Commissioner Amanda Pearson acknowledged that “there is more to do to address the concerns about disproportionality in stop and search.”) From the Mangrove protests against racial discrimination in 1970, to last summer’s Black Lives Matter protests, “the police have always aggressively reacted to Black protesters who have mobilised for justice,” says BPLS.

Many have also highlighted the behavior of police in the case of sisters Nicole Smallman and Bibaa Henry, two Black women who were murdered in June last year. Two serving Metropolitan police officers were arrested after allegations that they took “non-official and inappropriate photographs” of Smallman and Henry’s bodies and shared the images on a private WhatsApp group.

“Black people, and particularly women of color, have been talking about the violence of the police for decades and decades. I do wonder if the photo from Saturday that went viral had been of a Black woman, whether the response would have been as emphatic,” says Olivia. “However, I think sometimes, it takes a lot of rings of the same alarm for people to finally wake up. But I do think that this is such a huge reckoning in British society.”

The Police, Crime, Sentencing and Courts Bill contains wide-ranging legislation that human rights groups have condemned because of the extended powers it would grant to police cracking down on protests. The bill passed its second reading in the House of Commons Tuesday night with a majority of 96 votes.

Campaigners say the right to protest is under threat, particularly when coronavirus restrictions have also been used to target Black Lives Matter protesters and environmental protesters. Mounted police were reported charging at Black Lives Matter protesters at a demonstration that turned violent in the summer. On March 14, over 150 organizations, including Liberty, warned ministers that if the bill became law, it would be “an attack on some of the most fundamental rights of citizens.”

“It’s really an all-out assault on our rights and a draconian piece of legislation,” says Comyn, speaking to TIME in advance of Tuesday’s vote and referring to the bill’s proposals which include the expansion of police powers, the introduction of restrictions on protests, and new stop and search powers. The bill would also allow police to remove unauthorized encampments, which rights groups say would threaten the way of life of Gypsy, Roma and traveller communities. The fact that the 307-page bill was introduced on March 9, with MPs debating it on March 15 and voting on it on March 16, indicates that the government was trying to rush it through without giving groups time to properly scrutinize and examine it, says Comyn.

The events at the vigil, and the fact that a serving police officer has been charged with Everard’s murder, have prompted fresh calls for institutional change and reform within the police, as well as more attention on the abolitionist movement against prisons and expanded legislation. “I think this moment has been very crucial,” says Rosa, the representative from Abolitionist Futures, whose networks span Britain and Ireland. She says a large amount of that interest can be credited to the work of Black Lives Matter organizers too. “People are now seeing that the police and criminal justice system don’t keep us safe, and I think there’s been real recognition in the last few days for many people that enhancing the power of the police is not going to produce safer communities.”

While abolition is often seen as a U.S. concept, there is a long tradition of a U.K. movement, and the context of policing in both countries is quite different. London’s Met was established in 1829, and is often called the first modern-day professional police force—this model was often exported to colonial nations, or replicated in institutions in other countries.

Activists hope that the energy of this moment and the backlash to the bill can be harnessed for more attention on community-based solutions, and more funding for a supportive welfare system, refuges, mental health support and affordable housing, rather than doubling down on carceral criminal justice responses and sending undercover police into bars, as the government announced Monday. “It’s not addressing the structural problems which produce gendered violence, and which the kind of conditions that the state produces,” says Rosa. “We can’t look to those institutions to solve this problem, because they’re part of the problem and they need to be dismantled.” 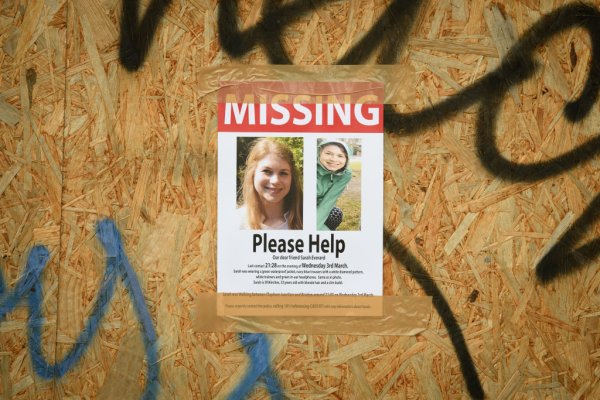 A Woman’s Disappearance Sends Shockwaves Through the U.K
Next Up: Editor's Pick