Andrew Cuomo Was a 'Resistance' Icon. Now There's 'Blood in the Water'

New York Governor Andrew Cuomo speaks during a press conference before the opening of a Covid-19 vaccination site in Queens on Feb. 24, 2021.
Seth Wenig—AFP
By Charlotte Alter

A little less than a year ago, New York Governor Andrew Cuomo was on top of the world. His daily press briefings about the coronavirus pandemic became must-watch TV, even earning him an International Emmy Award. He was the tough guy of Democrats’ dreams, going toe-to-toe with President Trump over personal protective equipment and ventilators. The New York Times called him “the control freak we need right now”; his super-fans called themselves “Cuomosexuals.” At the height of the pandemic, Cuomo published a book about how well he had handled the crisis—an Albany version of posing in front of a “Mission Accomplished” banner. A few desperate Democrats even attempted to lure him into the presidential race with the Draft Cuomo 2020 movement.

Now, it may all come crashing down around him.

First Cuomo came under fire for withholding data about the number of COVID-19 deaths in nursing homes. Next a Democratic Assemblyman said the Governor had threatened to “destroy” him for challenging his handling of the issue. Then came a one-two punch, with former aides in recent days alleging that the Governor had sexually harassed them in his office. (The Governor denied one aide’s allegations and apologized after the other.) Top New York Democrats, including Senators Chuck Schumer and Kirsten Gillibrand, are calling for a formal investigation by New York Attorney General Letitia James. Other Democrats are joining Republican calls for him to resign.

It’s a Shakespearean reversal of fortune that makes last spring’s hero-worship of the governor look naive at best and mortifying at worst. The rise and possible fall of Andrew Cuomo illustrates the unpredictable political physics of the post-Trump era, in which careers that soared on the winds of anti-Trump resistance can just as easily plummet when those same forces turn against them. Trump’s presidency ushered in a blind adulation of his prominent foes just as it triggered a cultural and political re-examination of sexual harassment, workplace intimidation and abuse of power.

Over his decades in New York politics, the Governor’s bellicose personality hasn’t changed, but the landscape around it has. The Trump era and the #MeToo movement offered a crash course in abusive power dynamics, unleashing forces that can tear down heroes even more easily than they build them up. “There’s this phenomenon that took shape during the Trump years where Democrats would see another Democrat on TV making sense, and they would fall in love and give them all their money,” says Rebecca Katz, a New York progressive strategist who was the chief strategist for Cynthia Nixon’s gubernatorial primary campaign against Cuomo in 2018. “As we lionize folks, we just really need to take a harder look at what they actually stand for and who they actually are.”

“I think it’s important to take elected officials off pedestals,” says State Senator Alessandra Biaggi, a Democrat who once worked in Cuomo’s counsel’s office and has called for the Governor to resign. “When we put people on pedestals we put them above the fray in a way that makes them untouchable. When they make a mistake, there’s a hesitancy to hold them accountable.”

But unlike Republicans, most of whom shrugged off the many sexual-misconduct allegations against Trump, Democrats have branded themselves as the party of #MeToo, even when it comes to their own. Senator Al Franken was memorably sacrificed on the altar of accountability, when he resigned under pressure from Democratic colleagues after several allegations of unwanted touching and kissing, even as questions remained about his accusers and their stories. “You have heard dozens and dozens of Democrats come out and condemn what Cuomo is doing,” says Katz. “The Republican Party was crickets for four years when it came to Donald Trump.”

Like a frog in hot water, Cuomo’s troubles began at a simmer before suddenly reaching a boil. The first major warning signs came in late January, when James issued a report estimating that nursing-home deaths in New York had been undercounted by as much as 50%. The revelations were especially galling given how Cuomo had boasted about his handling of the pandemic while New Yorkers were still in its throes. And they may have emboldened Cuomo’s many critics.

Cuomo’s bullying, bare-knuckled style has never been much of a secret. But suddenly, after the Trump-fueled reckoning over attitudes around workplace behavior, private criticisms have become public. As one former Cuomo aide put it: “There’s blood in the water.”

Assemblyman Ron Kim, who has slammed the Governor’s handling of the virus in nursing homes, said recently that the Governor called to threaten him if Kim did not retract his criticism. “He said I hadn’t seen his wrath and that he can destroy me,” Kim told CNN.

Then, last week, two former aides accused the Governor of sexual harassment. One of them, Lindsey Boylan, alleged that Cuomo had asked her to play strip poker and had kissed her on the lips without her consent. (A statement from the Governor’s office calls these allegations “quite simply false.”) A few days later, another former aide, Charlotte Bennett, came forward to say that the Governor had asked her if she was monogamous and had ever been with an older man, comments she interpreted as sexual overtures. (In a statement on Sunday, the Governor said his comments were “misinterpreted as an unwanted flirtation” and apologized.)

The hits are still coming: on Monday night, another woman accused Cuomo of making an unsettling advance, this time at a wedding reception in 2019. (A spokesperson for the Governor referred the New York Times, which broke the story, to his prior apology.)

Many New York Democratic operatives believe Cuomo, who is running for re-election to a fourth term as governor next year, will hunker down and ride out the storm, much as Virginia Governor Ralph Northam did after he was accused of posing in blackface as a young man. Cuomo has long boasted legions of devoted supporters, and it’s too early to tell how widely the allegations have affected him. But even if he doesn’t resign as some Democrats hope—even if he is re-elected—Cuomo is no longer the anti-Trump hero that many Democrats thought he was. 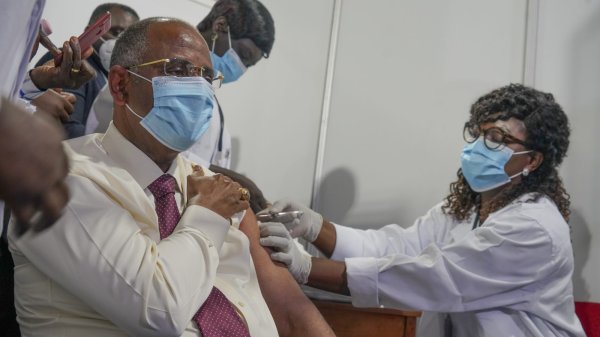 The First COVID-19 Vaccines Shipped Through COVAX Were Administered in the Ivory Coast
Next Up: Editor's Pick