We'll Probably Never Eliminate COVID-19 from the U.S. It's Still Worth Trying

Members of the National Guard help drivers at a COVID-19 vaccination site on the campus of California State University of Los Angeles in Los Angeles County, California, the United States, Feb. 22, 2021. Los Angeles County, the most populous county in the United States, is experiencing a large decline in new COVID-19 cases as vaccination rollout continues, local health authorities said Monday.
Photo by Xinhua via Getty Images
Ideas
By William Hanage and Gavin Yamey
Hanage is Co-Director of the Center for Communicable Disease Dynamics and an associate professor of epidemiology at the Harvard T.H. Chan School of Public Health, where he studies the evolution and epidemiology of infectious disease
Yamey is a physician and professor of global health and public policy at Duke University, where he directs the Center for Policy Impact in Global Health.

2021 got off to a grim pandemic start in the U.S. A huge surge in COVID-19 cases followed the holiday season, peaking at around 300,000 new cases on Jan. 8, 2020. More than 20,000 Americans lost their lives to the virus in a single week in January alone and over 146,00 in total have died since the start of the year. But six weeks later, the picture looks more promising. New daily cases have fallen sharply, daily deaths have fallen to levels not seen since Thanksgiving, and the pace of vaccine roll-out is speeding up.

These positive trends mean that we can now begin to ask what the endgame might look like. Would we be happy with an endemic scenario in which disease levels are kept low but SARS-CoV-2 continues to circulate indefinitely, perhaps with the same kinds of seasonal peaks as we see with flu? Or should we aim higher and attempt to eliminate the disease, meaning there would be no new cases of that disease within our borders? A third scenario is eradication—achieving zero new cases worldwide—but this would be an enormous and highly uncertain global undertaking (we’ve only eradicated one human infectious disease, smallpox).

For elimination in the U.S., we’d need to be able to detect all imported cases at the border and place those people in managed isolation until they are no longer infectious. We’d also need a high-performing surveillance system that can test enough Americans every day to be able to quickly detect and extinguish any outbreaks.

To be sure, we have a long and hard road ahead of us to reach either low endemic levels (the flu scenario) or elimination. There are still huge amounts of infection and transmission in the U.S. There are growing concerns that the more transmissible B.1.1.7 variant, which is doubling every 10 days in the U.S., could cause cases to rise again, and we do not yet have a high-performing nationwide test-and-trace surveillance system in place—let alone adequate support for those infected to isolate themselves or for their contacts to quarantine. Nor have we adopted measures at our borders to reliably detect imported cases and isolate them.

But none of this should be cause for fatalism. With a multi-faceted approach we can continue to drive down transmission and daily case numbers. Proven public health measures, such as masking (ideally with high-filtration masks), distancing, and avoidance of poorly ventilated buildings, should be maintained to protect the unvaccinated and break the cycles of transmission. The roll-out of rapid antigen tests, which would be funded in President Biden’s $1.9 trillion stimulus proposal, would help people return to work and school. Stepping up our genomic surveillance will help guide decision makers as known and new variants start spreading.

In parallel, more Americans will get vaccinated, dramatically reducing their chances of severe illness or death. Based on promising early data from Israel, it also looks like some vaccines may reduce transmission. In other words, while a vaccinated person can still test positive for SARS-CoV-2, the vaccine reduces the chances that they’ll spread the virus to others. If this is the case, every person who is vaccinated will contribute to a firebreak that will stop future surges of infection before they happen. To get there, experts believe we need about 70% of the population to have immunity due to either vaccination or past infection, and probably closer to 80% (or even higher) in the case of more transmissible variants.

We will need to continue to monitor the situation closely and be ready to take prompt action where things are not working. For a start, vaccines are still not readily available, particularly to Black Americans, who are being offered shots at much lower rates than white Americans. Even when availability becomes widespread, perhaps by August, a significant proportion of Americans say they do not wish to be vaccinated, for reasons that we need to better understand. We need to listen to their concerns, not dismiss them, because the more people are vaccinated, the better the community as a whole is protected.

This approach will gradually transform our lives such that the restrictions can start to be lifted once we’re out of the woods. But there won’t be a “light switch” moment when suddenly the disease has been halted. A spring or winter surge could yet occur, requiring the return of restrictions. The only way to be sure that won’t happen is elimination.

Elimination is a tall order. But large parts of the world have managed it for other viruses, like polio and measles—although the potential for reintroductions means we must stay alert and keep vaccination levels high, as shown by a recent measles outbreak in California in which fully 76% of those infected had chosen to go unvaccinated. An easier goal to reach would be low-level endemicity, in which SARS-CoV-2 circulates but is less deadly thanks to regularly updated vaccines, vaccine boosters, and new treatments (all of which “de-risk” the virus). In a poll of over 100 infectious-disease researchers, virologists, and immunologists working on the coronavirus, 89% felt that SARS-CoV-2 was likely or very likely to become an endemic virus.

As outcomes, elimination and endemic transmission may be opposites, but thinking that we need to choose one or the other is a mistake that can impede public understanding of how to manage the pandemic. All the tools that have been used to achieve local elimination of SARS-CoV-2 in places like Australia, Taiwan, and New Zealand—such as test and tracing, case isolation, quarantining of exposed people, border management, and aggressive outbreak control—prevent transmission. These tools avoid the agonizing choice between prolonged damaging lockdowns or prolonged and massive strain on healthcare. And we now have effective vaccines to help the elimination effort.

But vaccines alone do not guarantee elimination, much less worldwide eradication. Nevertheless, recent results from the United Kingdom and Israel suggest that vaccination has rapid benefits, including marked reductions in the numbers needing hospitalization.

The benefits of acting like elimination is possible, even if the harsh reality proves otherwise, are illustrated by those countries that took that approach. Countries like Australia or New Zealand will be embarking on their vaccination campaigns having suffered a tiny fraction of what the U.S. has endured. In a growing number of U.S. states, more than one in every five hundred people have died from COVID-19. The equivalent figure for New Zealand is one in a million. Which do you think is the better place from which to be rolling out an effective vaccine?

There is one thing we can say with certainty: whichever endgame the U.S. chooses will involve trade-offs and we should be open about these. For example, countries that are attempting elimination have returned to a near normal life but they must curtail travel (only to and from other eliminating nations) and maintain strict border measures. If the virus is introduced into unvaccinated communities, as seen recently in Auckland, New Zealand, strong interventions may be necessary.

On the other hand, accepting endemicity means we will have to “tolerate” some level of deaths, probably with seasonal peaks. This is how we currently handle seasonal influenza; we work to minimize infections and their consequences when we cannot eliminate them, and society accepts the resulting risks. Risks cannot be reduced to zero or none of us would ever get in a car.

It is time for an open discussion of the U.S. endgame. While experts can provide scientific advice, given the difficult policy choices ahead, a more inclusive and participatory dialogue is needed, through hearings, town halls and citizen panels. Such deliberative democracy may start to bind up the wounds—pandemic and otherwise—of the intensely partisan 2020. Meanwhile, we need to get vaccines into arms and ensure the virus and its variants never again experience such ready access to so much unprotected human real estate. 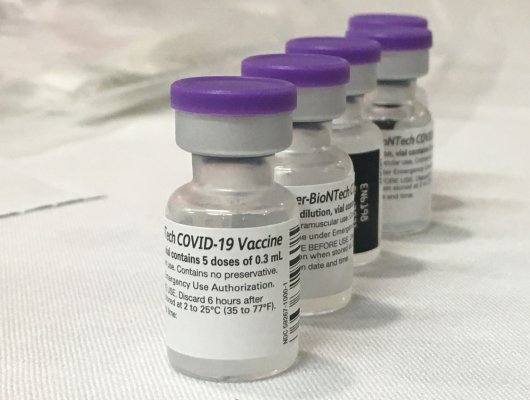 Pfizer-BioNTech Announces They Will Test a Third Dose of Their COVID-19 Vaccine
Next Up: Editor's Pick