Everything to Know About Demon Slayer: The Manga, TV Series and Record-Breaking Film

Of all the things 2020 has come to be known for, movie releases breaking box office records wasn’t one of them. But one film defied the odds. Released in Japan on Oct. 16., the animated film Demon Slayer: Kimetsu no Yaiba the Movie: Mugen Train ended a 19-year record held by the Studio Ghibli classic Spirited Away. Hitting $313 million in ticket sales in December, the movie overtook director Hayao Miyazaki’s magnum opus to become the country’s highest-grossing film of all time.

In the months since, the film—based on the manga Demon Slayer: Kimetsu no Yaiba by Koyoharu Gotouge—has broken another record previously set by Spirited Away: Mugen Train is now the highest-grossing anime movie in the world. It is set for theatrical release in the U.S. and Canada on April 23, in both a subtitled version and an English dubbed version.

Before the film made headlines for shattering records, the Demon Slayer franchise was already amassing a dedicated global fanbase. Both the manga that was first published in 2016 and the television series adapted from the manga have recorded feats of their own. Ahead of the North American release of Mugen Train, here’s everything to know about Demon Slayer, the author-illustrator behind it and the meteoric success of the manga, television series and film.

What is Demon Slayer about?

In this fictional world set in early 20th century Taishō-era Japan, man-eating demons roam the land each night. 13-year-old Tanjiro Kamado’s world is turned upside down when he returns home one morning to find his entire family murdered save for his sister Nezuko—who has turned into a demon. Determined to avenge their deaths and find a cure that would transform Nezuko back into a human, Tanjiro sets out on a journey to train for the Demon Slayer Corps. The story follows him as he joins this underground organization of skilled fighters who dedicate their lives to protecting humans from the vicious creatures.

Koyoharu Gotouge (recently featured as a part of the 2021 TIME 100 Next) wrote and illustrated Demon Slayer. The mangaka, or manga creator, has not publicly revealed their identity, and instead uses the pen name Gotouge and appears as an avatar of an alligator in glasses when making announcements about the series. Despite not much about Demon Slayer’s author being known to the public, those who collaborate closely with Gotouge are familiar with their work ethic. “I have known Gotouge sensei [the honorific term for teacher in Japanese] since the start of their career, and they were not necessarily without fault at the beginning,” Kohei Ohnishi, an Editor-in-Chief of Weekly Shonen Jump who edits Demon Slayer, tells TIME. “But through hard work and perseverance, they were able to grow considerably as a mangaka.”

Though Gotouge’s schedule has not been shared before, the daily work routines of manga authors are reputed to be rigorous. For instance, Oda Eiichiro—the creator of One Piece—has shared about sleeping regularly from 2 AM to 5 AM to work on his manuscript. Ohnishi cites Gotouge’s strong sense of integrity and dedication to their work, and says the mangaka is “very aware of how readers are responding to their work.” Asked about the most impactful element of Gotouge’s writing and art, Ohnishi references the strong characters and dialogue. “Their characters are all unique, yet still rooted in reality, and that’s a very difficult balance to strike,” Ohnishi says. “In addition, there are a number of memorable lines filled with originality in Demon Slayer.”

A cover of the Demon Slayer: Kimetsu no Yaiba manga
Credit: KIMETSU NO YAIBA © 2016 by Koyoharu Gotouge/SHUEISHA Inc. via VIZ Media

How did the manga and anime series become so popular?

Demon Slayer was serialized in Weekly Shonen Jump—a long-running manga magazine that has published some of the most iconic series, from Naruto and Dragon Ball to One Piece and Yu-Gi-Oh!. The series first appeared in a 2016 issue of the manga magazine, and ran periodically until its final volume was released in 2020. While the print volumes saw moderate success in Japan during its first years of serialization, its popularity surged in 2019—the same year that the 26-episode television adaptation of the manga aired. The TV series, produced by the Japanese studio Ufotable, was instantly praised by fans and critics alike for the stunning animation of the fight sequences. Based on the pure artistry of its battle scenes alone, Demon Slayer began to be regarded as one of the best action anime of all time. Shortly after the TV series completed airing, the manga ended an 11-year-streak held by One Piece to become Japan’s best-selling manga of the year in 2019, according to the Oricon chart.

Hiroyuki Nakano, another Editor-in-Chief of Weekly Shonen Jump, discussed Demon Slayer’s success and how it reflected the evolving relationship between manga and anime in a 2020 interview. “Normally, a manga gradually sells more copies throughout the anime’s run, but Demon Slayer: Kimetsu no Yaiba‘s sales shot up straight after the anime ended,” Nakano told Nikkei Entertainment. Word of mouth about the anime, following its television release, appeared to have significantly contributed to the booming sales. “No matter how great a manga it is, it won’t become a hit just because it ran in Jump,” Nakano said.

The following year saw Gotouge’s series dominating sales even more. Not only was Demon Slayer the best-selling manga of 2020 in Japan, but its estimated 82 million copies sold was nearly 10 times as much as the manga that ranked second. An estimated 3.95 million copies of the final volume were published.

How did the film become so popular?

Demon Slayer: Kimetsu no Yaiba the Movie: Mugen Train was released in 2020, when the manga was at the height of its popularity. The film was directed by Haruo Sotozaki and produced by Ufotable—the same studio behind the TV series—and adapted Gotouge’s work in a direct sequel to the 2019 show. Japan’s box office fell by 45% in 2020, but ticket sales for foreign films saw a much more significant decrease (down 71%) compared to that of Japanese films (down 23%). The success of Mugen Train helped bolster the ticket sales of domestic movies. Earlier in September 2020, Japanese authorities had lifted restrictions for theaters to operate at 50% capacity, though some movie chains decided to keep the gathering size limitations in place. On Oct. 16, the film was released in more than 400 theaters across Japan, and The New York Times reported that one theater in Tokyo scheduled 42 showings of Mugen Train on opening day beginning at 7 AM. The movie grossed $44 million over its first three days, marking the biggest opening weekend in Japan’s history. (The Matrix Reloaded, which drew in $20.8 million, had set the previous record back in 2003.)

In the weeks and months that followed, Mugen Train shattered one box office record after another. Within only 10 days, the film hit a revenue of $100 million—the fastest to reach this milestone in Japan. (It took Spirited Away 25 days to hit the same number.) In the past, a mix of domestic animated movies and foreign films have seen the most success in the country. Besides Spirited Away, Princess Mononoke and Howl’s Moving Castle—both from Studio Ghibli—as well as Makoto Shinkai’s 2016 hit project Your Name have ranked in Japan’s top 10 highest-grossing films. From abroad, movies including Titanic, Frozen and Harry Potter and the Philosopher’s Stone have topped the box office charts. In December, Mugen Train ended the streak of the long-reigning title in the first seat, surpassing Spirited Away to become Japan’s highest-grossing movie of all time.

A still from the movie Demon Slayer: Kimetsu no Yaiba the Movie: Mugen Train showing Enmu, the main antagonist in the film
Courtesy of Aniplex of America and Funimation

Where can I read or watch Demon Slayer?

The Demon Slayer manga was made available to audiences outside of Japan from its initial publication. In 2016, Viz Media, an American manga publisher partially owned by Shueisha Inc.—which publishes Weekly Shonen Jump—released the first three chapters of the manga in English simultaneously alongside the Japanese version. Starting in 2018, Viz began to periodically release new volumes of the series in English. Similarly, the Demon Slayer TV show has streamed on Hulu and popular U.S.-based, anime-focused sites Crunchyroll and Funimation—with English, Spanish and Brazilian Portuguese subtitles offered on both platforms and English dubbing on the latter. Demon Slayer’s availability on all of these platforms has contributed to its status as one of the most recognizable franchises from Japan among international manga and anime fans. The series is now even more accessible to global viewers, after hitting Netflix in January.

Do I need to watch the TV series before seeing the film?

Watching the TV series is highly recommended, as the film Mugen Train picks up where the 2019 series leaves off. In fact, the final moments of the television series set up much of the plot of the movie. The 26 episodes that have aired also offer rich introductions to many of the central characters in the film, helping the viewer to become invested in their backstories before they appear on the big screen. On Feb. 14, the second season of the Demon Slayer TV series was announced. It will feature the arc that follows the story in Mugen Train, meaning that the film connects the events of the TV series seasons.

A still from season one of the TV series Demon Slayer: Kimetsu no Yaiba
Courtesy of Aniplex of America and Funimation
More Must-Read Stories From TIME 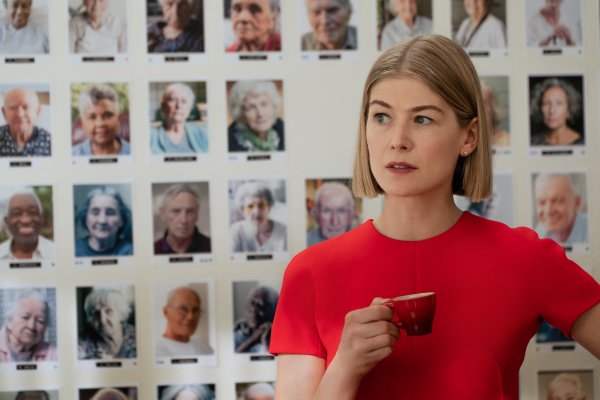 We Need More Female Villains Onscreen—But Not the Kind We Get in I Care a Lot
Next Up: Editor's Pick