How Australia May Have Just Saved Journalism From Big Tech

On Feb. 18, Australians woke up to find that all the local news stories that they had shared on Facebook had abruptly disappeared. The social media giant’s global cull of Australian news hit not only media companies, but also a wide range of governmental organizations, including some state and local health departments and the Bureau of Meteorology.

Facebook claimed it had no choice in the face of a proposed media law that would force tech giants to pay for the use of local media content. Both Google and Facebook opposed the new law.

There was an outcry and much hand-wringing about the future of journalism and the news business. But in fact, Facebook’s blockade represented a significant victory in the fight for the survival of a free press. It was not a stunning blow, but a retreat, after the social media company was abandoned by Google, which backtracked on its threat to pull out of Australia and signed deals to pay Australian media companies. Google’s deals represent a moonshot moment for saving journalism. And in fact, after talks with the government on the bill’s wording which yielded no major concessions, Facebook dropped its ban after five days.

Australia started this audacious attempt to rescue the free press from Big Tech in 2017 after regulators said companies like Facebook and Google exerted an outsized control of the flow of news to the public. With unusual bipartisan support, the government introduced a law last summer to force Big Tech companies to pay publishers for the use of their content in news feeds, summaries and search engines.

The Australian government argued if the tech companies didn’t start paying for journalism it would spell the end of the free press. In the past 15 years, Australian media advertising revenue dropped by 75%; 125 regional newspapers went online-only in 2020, leading to large job losses. It’s a universal story—in the U.S., more than 200 counties no longer have a newspaper. Meanwhile, Google and Facebook’s advertising revenues have skyrocketed, partly on the back of content created by media outlets.

The digital giants say that paying for links in search and social posts would kill the free and open web. (And create a precedent for every other industry on the planet that uses the web.) The Australian government, and media companies, say the law is about paying for content, not links.

Instead of pushing the digital platforms to pay more to the media by beefing up copyright laws, as Europe is doing, Australia devised an antitrust law that would improve media companies’ bargaining power and treat each negotiation as if it were a financial settlement in an antitrust lawsuit.

The law uses two “traps” created to redress what regulators say is a major power imbalance between the Big Tech and media companies. First, the law deploys a final-offer arbitration method—which compels both sides to submit a final offer to an arbitrator if they can’t come to an agreement, and empowers the arbitrator to pick one. This measure supercharges price negotiations to favor news companies. The regulator also inserted a poison pill: If a negotiation fails, the tech company cannot boycott that publisher’s content. It must host all Australian journalism on its network or carry none at all.

The mobs that mobilized at the U.S. Capitol in January, fueled by misinformation and fake news, focused the world on the outsized influence the tech companies were having on the flow of information. But long before that, global regulators were circling. There have been more than 100 government-led inquiries around the world into Big Tech in the past three years and many investigations are only just reaching the more dire conclusions.

With Google’s historic decision to pay up—reportedly signing deals worth tens of millions a year—Big Tech may perhaps finally have turned on itself. Google and Facebook have never liked each other, but they enlisted in this fight against Australia’s government together. If its media code passed unchecked into law, they said as recently as January, they would both hit the eject button. Google threatened to close all search; Facebook threatened to cut off all news.

But the Big Tech threats just hardened the politicians’ resolve. Into this impasse walked Microsoft’s CEO Satya Nadella via video link. Without a shred of antitrust irony, he called Prime Minister Scott Morrison to pledge Microsoft would quickly step in if Google walked out. It would scale up its Bing search engine, it would sign up for the code, it would pay up for journalism. Its president Brad Smith posted a long treatise in praise of the importance of public interest journalism.

Within hours, Google’s talks with publishers were back on. Within days, the biggest deals ever seen to pay for journalism were announced. All of Google’s new agreements sit outside the ground-breaking code but all have been signed because of it. Google has worked out how to live with a law it didn’t like because it realized that the idea of paying for news is here to stay in Australia—and it wanted to stay, as well.

Despite the high drama of shutting down news, Facebook still has sizable payment offers on publishers’ tables and there they remain with doors ajar. In the sweep of media history, whichever way they resolve it won’t mean much, because Google won the day and the free press won the war.

Google’s deals are about five times the value of those it recently signed in France under the new E.U.’s copyright approach. Australia’s reaching for antitrust weaponry presents a model for other countries of how to use competition laws to unlock big enough payments for journalism to survive. 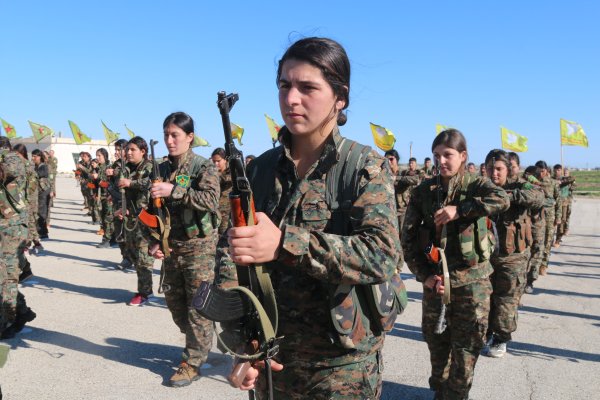 The Women Who Fought Against ISIS
Next Up: Editor's Pick