Seiko Hashimoto, Minister for the Tokyo Olympic and Paralympic Games, speaks during a press conference in Tokyo on March 17, 2020.
Kazuhiro Nogi–AFP/Getty Images
By Isabel Reynolds / Bloomberg

The Tokyo Olympics organizing committee appointed one of Japan’s most-celebrated female Olympians as its new chief, after her predecessor stepped down over his sexist remarks.

Seiko Hashimoto — a seven-time Olympian who was later elected to parliament five times as a member for the ruling Liberal Democratic Party — was named to the post at a Tokyo 2020 board meeting Thursday. Hashimoto earlier in the day resigned from her positions as minister for the Olympics and for gender equality to meet requirements for the new job.

“We must make the Olympics, which starts in five months, a safe and reassuring event,” Hashimoto said. “Measures against the coronavirus are the top priority.”

Named after the Japanese word used for the Olympic flame, Hashimoto, 56, is a former Olympic speed skater and track cyclist. She will be replaced as minister by Tamayo Marukawa, who has previously served as Olympics Minister, public broadcaster NHK said, keeping the number of women in Prime Minister Yoshihide Suga’s 20-member cabinet at two.

One of Hashimoto’s most pressing tasks will be winning back the confidence of sponsors, including the country’s biggest company Toyota Motor Corp., which raised concerns after former Olympics chief Yoshiro Mori disparaged women by saying they talk too much in board meetings. The 83-year-old Mori, a former prime minister with a history of gaffes, stepped down last week.

“For too long, sexism has found comfortable shelter in the Olympic movement,” said Jules Boykoff, a professor at Pacific University Oregon and author of a political history of the Olympics, adding that a woman has only once headed a local organizing committee — at the 2004 Athens Games.

The new post could be one of Hashimoto’s most difficult assignments, coming just five months before the opening ceremony. The Summer Games has already been pushed back by a year due to the coronavirus pandemic — marking the first postponement since the modern Olympics began.

Opinion surveys show little support among the Japanese public for staging a major global sports event during a deadly pandemic in a country that only began its vaccine roll out Wednesday.

While Hashimoto came under a shadow after allegations she had sexually harassed a popular male ice skater in 2014, she went on to be appointed to the cabinet in 2019.

From Seika to Seiko

Hashimoto was born to a farming family on the northern island of Hokkaido in October 1964, five days before the opening of the last Japanese summer Olympics. Her father named her Seiko, from the Japanese word for the Olympic flame, “seika.”

She grew up thinking she was born to be an Olympic athlete, while learning to skate on a frozen lake on the family farm.

Hashimoto boasts an impressive Olympic resume, starting with her first appearance in the Winter Games in 1984 in Sarajevo. Four years later, she competed in Calgary as a speed skater and in the Summer Olympics in Seoul as a cycling sprinter.

Her only Olympic medal came in 1992 when she won a bronze in the 1,500-meter speed skating competition in Albertville, an achievement celebrated throughout Japan. She followed that up by competing in the summer Olympics in Barcelona in cycling.

Her athletic career was closely followed by Japanese media, especially in sports daily newspapers popular with salarymen commuting to their jobs. A year after competing in the 1994 Winter Games in Lillehammer, she was elected to Japan’s upper house of parliament as a member of the Liberal Democratic Party.

Hashimoto’s final Olympics came a year after becoming a lawmaker, when she competed in the 1996 Summer Games in Atlanta as a cycling sprinter — putting together one of the most unique lists of accomplishments among Olympians.

“I want the organizing committee to confirm the great vision of the Tokyo Games — unity in diversity,” Hashimoto said. “I want to create a legacy of building a society that accepts people regardless of gender, disability, race or sexual orientation.”

–With assistance from Yuki Hagiwara. 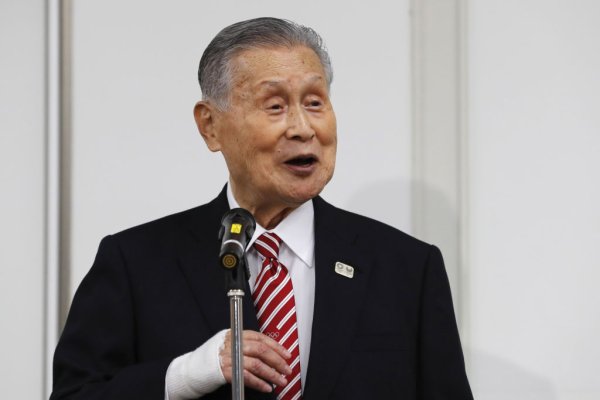 Olympics Chief Resigns Over Sexist Comments
Next Up: Editor's Pick