What Happens Next in Italy With Mario Draghi Taking Charge

Mario Draghi, Italy's prime minister-designate, smiles at a news conference following a meeting with Italy's President Sergio Mattarella in Rome, Italy, on Friday, Feb. 12, 2021. Draghi agreed to take over as Italys next prime minister, naming his ministers as he prepares to head a new government that will prioritize the pandemic, a struggling economy and moving ahead with European integration.
Alessandro Di Meo/ANSA/Bloomberg
Ideas
By Ian Bremmer
Bremmer is a foreign affairs columnist and editor-at-large at TIME. He is the president of Eurasia Group, a political-risk consultancy, and GZERO Media, a company dedicated to providing intelligent and engaging coverage of international affairs. He teaches applied geopolitics at Columbia University’s School of International and Public Affairs and his most recent book is Us vs. Them: The Failure of Globalism.

Mario Draghi is about to be sworn in as Italy’s next prime minister. The former head of the European Central Bank, affectionately dubbed “Super Mario” by the press, is a skilled political operator hailed for almost single-handedly rescuing the Euro currency in the depths of the Eurozone crisis. But he faces his greatest test yet in getting Italy’s politics and economics back on track.

Italy is the Eurozone’s third-largest economy (behind only Germany and France), but the influence its economic heft should afford it in E.U. policymaking is undermined by perpetual economic and political dysfunction. The one constant of Italian politics since World War II is the country’s struggles to keep its coalition governments together; the last few years have been no different, as subsequent governments (first between the anti-Establishment M5S and far-right Lega, then between M5S and the center-left Partito Democratico and Italia Viva parties) have collapsed. This latest coalition fell apart over disagreements over how to distribute more than €200 billion worth of funds earmarked for the country from the E.U.’s coronavirus Recovery Fund. It’s not just a question of divvying up the money according to political priorities; accessing the full amount of funds available requires serious (and painful) structural reform.

Sergio Mattarella, the country’s president, tried to get Italy’s political parties to reach a compromise to form a new government, but when that failed, he made the surprise decision to charge Mario Draghi with the task of forming a new government to avoid a new election in the midst of the pandemic. That gave way to relief as Draghi commenced talks with all the parties; Draghi’s unique stature makes him well liked by the Italian populace (70%+ approval rating), and his competence has most every party in parliament willing to support him in these early days. It also helps that most parties are wary of returning to elections, as the pandemic has upended the country and with it their political calculations. Plenty of politicians in Rome are willing to take the stability that a Draghi government represents in the interim, especially as the country needs to hold elections no later than spring of 2023.

Italy has often had to cycle through technocratic governments as a stop-gap measure between elections. But there are a few things going in Draghi’s favor. First, he doesn’t have to implement austerity measures like previous technocratic Italian governments were forced to do (indeed, it’s the opposite given the Recovery Fund and low rates for borrowing), he commands an incredible amount of respect abroad and at home, and he’s a technocrat who has wrangled with both Italian and Brussels politics for decades and knows how to play the game, something other technocratic prime ministers have struggled with. Second, he also is rumored to be a frontrunner to replace Mattarella as president of the country next year when Mattarella’s term is set to expire, which means that he doesn’t represent that much of a political threat to the future aspirations of other party leaders—this is an emergency situation, and Draghi is being called in for a short amount of time to help set Italy on a sustainable path. As of this writing, it’s looking like technocrats and major politicos will form the cabinet, but the most critical ministries are likely to go to technocrats—finance, foreign affairs, justice and interior.

Draghi’s immediate priority is the pandemic. Italy doesn’t have much ability to speed up or change vaccination rollout plans (something E.U. countries ceded to Brussels, for better or worse), but he will have to decide whether to extend the country’s lockdown which is scheduled to expire in a few weeks. He also will be tasked with figuring out if and how to extend economic support for the Italian people to keep them afloat through the next phase of the pandemic (i.e. more stimulus for families and businesses).

Then comes the hard part—figuring out how to structure and disburse the stimulus windfall coming Rome’s way. All told, nearly €209 billion will be made available to Italy in a mixture of loans and grants, but getting the full amount depends on Brussels signing off on Italy’s reforms. So what will those reforms entail? Italy has plenty to fix, but on the list are: transitioning to a more green economy, building better infrastructure, upgrading and digitizing many public functions of the state, cutting down bureaucracy, implementing tax reforms to help workers (and getting more of them back into the labor market), judicial reforms to make civil trials shorter, and broad education reforms. Not on the list? Reforming Italy’s byzantine electoral system, something that has been on Rome’s to-do list for years.

But the reality is that all these reforms will be very tricky to pull off, even with billions suddenly available and someone like Draghi leading the charge. And that’s because the Italian political landscape is as fragmented as ever, and many of the parties diametrically opposed on policy priorities. Everyone is supporting Draghi now, but that’s because it costs nothing to do so and he’s said nothing publicly about what his reforms will be. Once proposals are in the open, that’s when the knives will come out. Historically, the first 6 to 12 months are crucial for technocratic governments in getting their goals accomplished. Which means the clock starts ticking as soon as a vote of confidence is held to install the new government.

Matteo Renzi, former Prime Minister of Italy and the person who triggered the collapse of the previous government by pulling his Italia Viva party out of the coalition: “The only way in the middle of a pandemic was to call in the best player, because Mario is the best player… If you look at financial markets, international leaders, the confidence of our citizens, it is a miracle.”

But confidence can be a fickle thing. You know who knows that well? Mario Draghi.

Usually, the arrival of a new Italian Prime Minister doesn’t fundamentally change political calculations in Brussels. But Draghi looks likely to buck that trend. Why? Read this excellent piece by my Eurasia Group colleague Mij Rahman to find out.

Super Mario has just entered the final boss stage of his career—keeping Italy afloat during a pandemic while also putting it on a sustainable track forward. If he pulls this off, Draghi will go down as one of the greatest non-elected political figures in modern European history.

The One Thing to Avoid Saying About It on a Zoom Call:

Italian governments have been paralyzed in the past for having to make deep austerity cuts; now they’re paralyzed for the exact opposite reason. If Italy can’t figure this one out… 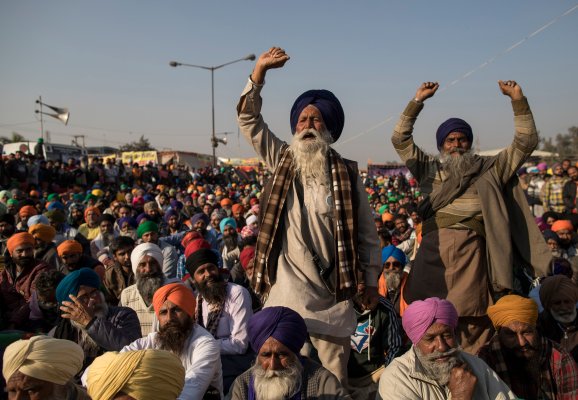 The Farmers' Protests Are a Turning Point for India's Democracy
Next Up: Editor's Pick