How to Work from Home Without Burning Out

Working remotely is a luxury—but it’s also an acquired skill. For employees lucky enough to be able to work from home at least some of the time, the trick to staying motivated and preventing burnout is to keep the office and the home from truly becoming one.

That’s been challenging during the coronavirus pandemic, which has forced millions of people all over the world to suddenly turn their home into their office. Despite the abrupt change of scenery, many of the same productivity rules still apply, says Wendy Wood, a professor of psychology and business at the University of Southern California and author of Good Habits, Bad Habits. “People will be more successful if they follow whatever worked for them in the office,” Wood says, including establishing boundaries between the professional world and your personal life.

These strategies can help you maintain productivity and avoid burnout when your workspace doubles as your home.

Designate a space for getting work done

Gianpiero Petriglieri and his wife, both university professors, have been working from their house outside of Paris, France for nearly a year because of the pandemic. The couple has two kids, which has made the blending of home and office a warm, chaotic and sometimes claustrophobic experience. Petriglieri has learned to mentally zone the home into areas designated for work—he writes at his desk and has Zoom meetings in a small guest room upstairs—and areas reserved for everything else. “I don’t work in the kitchen, and I don’t work in the bed,” he says. “I have very specific boundaries.” The mere inches that separate different parts of the apartment are enough to reinforce what he’s there to do. Sitting down at his desk, for example, triggers the mindset that “now is not the time to mess around.”

Creating these distinctions is important, Wood says, even when they are more mental than physical. (A section of the kitchen table can function like an office, as long as it’s reserved solely for work.) In time, simply entering the space will begin to activate “thoughts of working,” Wood says. It also sends important signals to your family, letting them know when you are and aren’t available.

Stick to a schedule

Going into the office automatically creates structure: each day is bookended by a commute. Without this foundation, particularly for workers who set their own schedules, it’s easy for the work day to dissolve or extend well into the night.

On its surface, doing work whenever—from wherever—is freeing. But it can become oppressive. As a graduate student working on her dissertation, Naomi Zewde, now an assistant professor in the graduate school of public health and health policy at the City University of New York, experienced this firsthand. “I was sleeping until 5 p.m. and working all night,” she says. “It was not a healthy way of living.” With the help of a therapist, she developed a more diurnal schedule that allowed her to get work done while maintaining a social life.

She succeeded by adopting a new mindset every weekday morning: “7 a.m., out the door,” Zewde says. “It was like a mantra.” She’d wake up to an alarm, put on her sneakers and leave her apartment . On ambitious mornings, she’d go on a jog; on less ambitious ones, she’d walk around the block. Either way, she forced herself out into the fresh air, no matter the weather. Once back home, she’d shower, make breakfast and start work at 9 a.m. sharp.

After that, Zewde broke up her day into blocks: work from 9 a.m. to 12 p.m., eat lunch from 12 p.m. to 1 p.m., work again from 1 p.m. to about 5 p.m., then devote the rest of the evening to personal time. A hard endpoint was just as important as a consistent start time. “Knowing that you are going to stop in a few hours is motivating for not going to Reddit,” Zewde says.

Creating a routine is important, although what works for one person might not work for another, says Peter Kim, a professor of management and organization at USC Marshall School of Business. Kim, who’s generally most focused in the morning, reserves that period for work that requires deep concentration, such as writing. The afternoons are for “emails and other sorts of less taxing but important work.” For many people, deep concentration might naturally occur later in the day. For others, constraints such as childcare or team meetings ultimately dictate when and how deep work gets done.

For many employees, working from home has meant working longer hours. But spending more time staring at our screens doesn’t necessarily translate to being more productive. “There is plenty of research now on psychological depletion,” Kim says, which suggests that our attention, like a muscle, is taxed by extended use. Instead of stepping away from the computer to recharge, however, many people try to wring eight productive hours from the day, fighting off fatigue and distraction. These efforts are rarely successful.

Kim discovered this about himself years ago. A junior professor on the tenure track, he found he was able to write in the morning and catch a second wind in the afternoon—but only when he took a break in the middle of the day. Without a window of time to relax and recharge, writing became an exercise in diminishing returns. Today, he honors his reality by scheduling his work day around an extended mid-afternoon break.

Zewde and Petriglieri have both adopted similar rhythms. For Zewde, a midday break is a good time to work in some freedom to have fun—an element that’s easy to forget about, despite being the reason why so many people enjoy working from home. She likes to roller-skate during lunchtime at the basketball court across the street from her apartment, an activity she and her sister used to do growing up. Beyond nostalgia, roller skating gets her outside, away from her desk. “It’s crazy how much of my entire world is this room,” she says.

Early in the pandemic, Petriglieri fell into the trap of moving from one task (often Zoom meetings) to the next without getting up from his chair. Unsurprisingly, this led to unpleasant side effects like irritability, dehydration and a shrinking attention span. Now, he is careful to work breaks into his schedule: for exercise, hanging out with his kids and eating lunch with his wife. “We cook, we eat together, and we get back to work,” he says. “It’s lovely.” 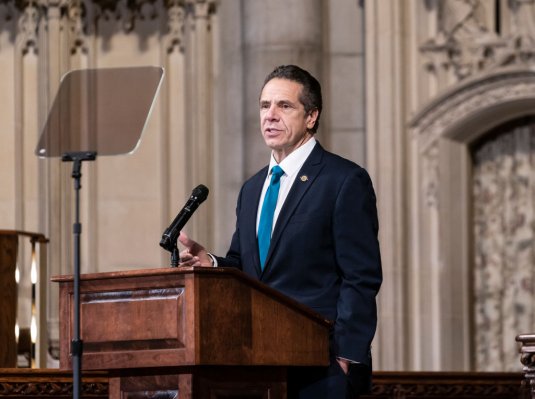 N.Y. Says Medical Staff 'Must' Be Vaccinated Before Elderly
Next Up: Editor's Pick