A walk-up customer at the door of a minister's marriage license booth in Elkton, Md. during the 1920-30s
Soibelman Syndicate/Visual Studies Workshop/Getty Image
By Melissa August

Long before the COVID-19 pandemic put many weddings on hold, in the early 20th century couples with a pressing need to wed would head to one of the towns across the country which had fewer restrictions on marriage licenses.

Elkton, Md., once known as the marriage capital of the East Coast, was one of the busiest of these “marriage mills” due to its geography and the lack of a waiting period, which had become mandatory in neighboring states by the early 1910s. Sitting on the same location at the tip of the Elk River that had brought General Howe, George Washington and the Marquis de Lafayette through during the Revolutionary War, Elkton’s location made it a convenient spot for couples coming from the populous northeastern states via train or later from interstate highways.

At the dawning of the 20th century, disapproving parents, work schedules or unexpected pregnancies could cause couples to rush to the altar. However, many states had set up barriers against hasty nuptials. States along the mid-Atlantic seaboard had enacted mandatory blood tests and waiting periods for marriage and in many states divorced persons could not marry. As one of the last remaining states without a waiting period, Delaware had become a marriage hub, but in 1913 the legislature imposed a 24-hour waiting period for residents and a 96-hour wait time for non-residents that closed the door to those seeking a quickie license. That left the Free State, Maryland, as the closest place for many couples to obtain a hasty marriage license.

While some romanticized the idea of an elopement, it was evident that others frowned upon these quick, uncomplicated unions. A 1914 headline in the Public Ledger of Philadelphia detailed how this Maryland haven for matrimony had been born and how it was perceived. “Preachers and Hackmen Thrive Through Novel Industry which Sprang into Existence as Rapidly as Jonah’s Gourd When Delaware Adopted Laws Correcting Evils of Its Lax License System.”

The marriage business was driven by enterprising cabbies who met couples arriving on the southbound trains from New York, New Jersey and other Northeastern states, dubbed the “Honeymoon Express” to offer the package deals that helped create an economic windfall for the town of Elkton. Cecil County, Md., historian, Mike Dixon tells TIME “I used to think it was the marrying ministers that drove it, but it was the cab drivers. They might as well have been Harvard business grads. Once you arrived at the train station, you were in efficient hands.”

Competition between the cabbies was so fierce that an editorial in 1937 said there were often fistfights “between rival agents.”

These entrepreneurs helped couples navigate the protocols which included a trip to the county clerk’s office, locating one of the many “marrying parsons” in town (Maryland required a religious ceremony), and finding the best deal for a ring at a local jeweler and flowers for the bride and a restaurant and hotel if the train schedule forced a couple to spend the night, according to Dixon. At the height of the boom, the little town of about 3,000 saw just over 16,000 couples take their vows. Main Street itself was home to 20 wedding chapels. By the 1930s the marrying ministers were performing over 40 marriages a day.

Says historian Dixon, “there was no halting Cupid as long as you had money.”

New York Giants star outfielder Willie Mays, 25, is shown with his bride of a few hours, Marguerite Wendelle, 27, at her home in Elmhurst, N.Y. after their wedding in Elkton, Md. on Feb. 14, 1956. En route to Elkton, Mays was arrested for driving 70 miles an hour on the New Jersey turnpike and paid a $15 fine.
Bettmann Archive/Getty Images

Elkton’s reputation was widely known. The elopement capital was featured in popular books and articles, radio programs, movies and plays well into the mid 20th century. Growing up in the 1950s in Elizabeth, N.J., bestselling author Judy Blume told TIME that she knew “certainly by high school” about Elkton’s reputation.

“I knew from the start that two of my characters in The Unlikely Event, afraid of an unintended pregnancy, would go to Elkton to elope.”

Before Blume referenced the town in her 2015 novel, a popular fiction series written in the 1930s and 1940s about an American teenage girl, Maudie Mason, showed that the town’s notoriety was well established with a mention in the 1934 Stag Line by Graeme and Sarah Lorimer. “Elkton is the place where all the people who want to get married in a hurry run off to, because they’ll marry anybody there right away,” Graeme and Sarah Lorimer wrote in Stag Line.

Moviegoers were so familiar with the position of the town that it was a throwaway line in the 1940 film The Philadelphia Story. Katherine Hepburn memorably repeats Cary Grant’s words as she announces a change of plans regarding her called off wedding to her fiancé and her last minute remarriage to Grant’s character: “Two years ago, you were invited to a wedding in this house and then I did you out of it by eloping to Maryland…which was very bad manners…”

Years later, in the 1961 movie Lover Come Back, Doris Day would wake up in a Maryland motel, not knowing where she was or how she got there, after marrying Rock Hudson while she was intoxicated. One of the Walton sons was even married in Elkton to his 17-year old bride on the TV show The Waltons.

Celebrity couples were no different from the average couples who found Elkton’s speedy marriage a great convenience. When an Austrian baroness married Arthur Graham Thompson of New York City in 1915, the Maryland local weekly announced that the Baroness had “landed in this country only a few days ago and in order to have a quiet wedding selected Maryland’s Gretna Green.”

By 1938, the state legislature in Maryland passed a law requiring a waiting period of 48 hours somewhat weakening Elkton’s major draw. In 1939, there were only a little over 4,500 marriages, down from the record high of 16,054 in 1938, according to Dixon. But World War II brought a slight surge again when men and women in the armed services were allowed to waive the waiting period since it was presumed they might be going overseas at any time.

One year after Elkton became the place to go for a quick ceremony, a 1914 article in the The Sunday Citizen out of Asheville, N.C., predicted that, “it is believed that the next Legislature will put on the brakes against easy marriages for non-residents, and follow the sister States of Pennsylvania and Delaware…” Despite that prediction the marriage industry thrived for several decades afterwards; a low fee and tradition continued to bring out-of-state couples to the Elkton courthouse.

Count Oleg Cassini, favored fashion designer to Hollywood stars and Jacqueline Kennedy, married his first wife, heiress Mary “Merry” Fahrney in 1938 in Elkton. The Wizard of Oz’s Cowardly Lion, Bert Lahr, married his second wife, showgirl Mildred Schroeder in 1940 in an Elkton, which TIME reported in the Milestones section. Billie Holliday was united in matrimony with trombonist Jimmy Monroe in Elkton in 1941 just before they joined Lionel Hampton’s band.

On a cold January day in 1964, a Cecil Democrat article reported that 100 people were lined up that morning to see Joan Fontaine of movie and stage fame arrive to wed her fourth husband, Alfred Wright, Jr., a writer for Sports Illustrated. Novelist John O’Hara, who was married in Elkton himself, was one of the wedding guests.

Rev. Pat Robertson, who made a run to become the Republican nominee for the presidency in 1988, had not only his marriage in Elkton revealed to the world, but also the actual date, which proved a bit awkward for the televangelist known for his support of family values and morality. He had married Adelia in August 1954 and celebrated the birth of their son 10 weeks later. A spokesperson for the presidential candidate explained then that the Robertson’s marked their anniversary on March 22, which is also Pat Robertson’s birthday and the day his son was conceived.

By 1964 the requirement of a religious ceremony, which had boosted the incomes of the retired ministers and local pastors ended allowing the Clerk of the Court to perform marriages, cutting out the middleman. By 2017 The Historic Little Wedding Chapel on Main Street, the last of the Elkton wedding chapels, had closed. In 2020 the Circuit Court in Cecil County issued only 422 licenses, down from the 525 it issued the previous year.

There is no denying it, as Clerk of the Circuit Court Charlene Notarcola says, “we are on a decline from years past.” Maybe it’s because of the pandemic, but this Valentine’s Day, so far, there are only three weddings scheduled.

The original version of this article misstated the author of the novel Stag Line in one instance. It is Graeme and Sarah Lorimer, not Judy Blume. 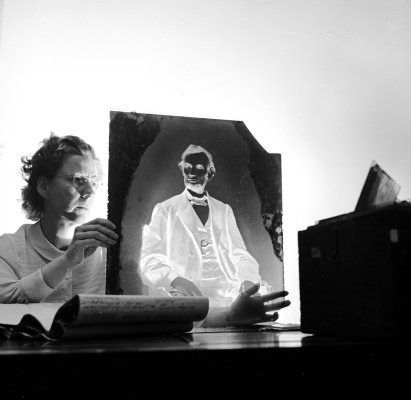 How Historians Say Lincoln Gets Misquoted
Next Up: Editor's Pick