Is the Republican Party Truly Trumpist Now? The Impeachment Trial Is the Ultimate Test

As the second impeachment trial opens for Donald Trump, it’s worth asking a question—why does one of modern America’s greatest political losers still seem to have a tight grip on the Republican Party? After all, Trump achieved a level of presidential political failure not seen since Herbert Hoover. In his single presidential term, he lost the House, the Senate, and the presidency. He entered the Oval Office with his party ascendant. He left the Oval Office with his party shut out of electoral power.

And yet, the loyalty remains, and it remains to such an extent that it’s considered a foregone conclusion that he’ll be acquitted at his impeachment trial, even after he lied relentlessly about the outcome of a presidential election, after he was caught on tape trying to pressure Georgia’s secretary of state to alter the state’s election results, after he exhorted the January 6th mob to “fight like hell,” and after he expressed affection for that same mob while it was still occupying the Capitol.

Many politicians have a loyal base, but Trump’s core supporters possess a ferocity that’s rarely seen in modern American politics. In many ways they imitate and exceed the cruelty and punitive pugilism of the leader they love so much. This ferocity emerged early in Trump’s rise. As early as 2015 Trump critics, especially in conservative media, endured a barrage of hateful and threatening attacks. Even Trump supporters were reluctant to engage in friendly criticism. I’ll never forget listening to Rush Limbaugh late in the Republican primary in 2016. He started to offer a constructive critique of a Trump debate performance, but you could tell he was reluctant. You could tell that he didn’t want to hear the pushback from angry callers. I turned off my radio and thought, Rush Limbaugh is afraid of his own audience.

That ferocity has endured, and it’s targets are not confined to public figures who oppose Trump. On January 6th, Southern Baptist leader Russell Moore described how ordinary Americans are “fearful.” They’re not afraid of “mobs overrunning their houses” the way that the Trump insurrection overran the Capitol, Moore said. Instead, they’re afraid of “of dealing with those who do believe in these endless conspiracy theories.” In fact, “Many are just exhausted, knowing that every word from their mouth will lead to psychological warfare.”

This is absolutely true. I live deep in the heart of Red America, and I’ve seen it with my own eyes. I’ve seen longtime friends tear each other apart on social media. I’ve heard from men and women who feel they can no longer talk to family members who’ve fallen deep into conspiracy theory rabbit holes and who think that any disagreement is proof of your “cowardice” or “weakness.”

Conservative grassroots activists are doubling down. State Republican parties, including Arizona, Wyoming, and Nebraska, have engaged in a wave of censures aimed at punishing Republicans who are insufficiently loyal to Trump. The chairman of the Texas GOP seriously suggested secession when the last, desperate legal challenges to the election failed.

We know that Trump support remains wide and intense. We know that it flows from the top-down (from media figures and politicians who consistently inflame an angry base) as well as from the bottom-up (that same angry base will punish any media figure who does not provide the content they demand). But there’s a key question—how much does this ferocity define the broader Republican public? Is the GOP truly Trump’s party now? Or is an angry minority pushing the majority to places it truly doesn’t want to go?

The short answer is that we don’t truly know yet. Before the January 6th riot, it was clear that huge numbers of Republicans applauded Trump’s fight. As Chris Hayes noted in an essay in The Atlantic, according to a GOP polling firm, 44 percent expressed concern that new GOP leaders “won’t fight like Donald Trump.” Only 19 percent were concerned that the GOP would abandon Trump’s policies.

Putting aside polls, there are two other concrete numbers that are instructive about the present and future of the GOP: 10 and 145. The first number represents the House Republicans willing to vote publicly to impeach Donald Trump, and it’s a tiny fraction of the Republican conference. The second number represents the overwhelming majority of House Republicans who voted in a secret ballot to retain Liz Cheney in House leadership in spite of her vote to impeach, a direct rebuke to the Trump wing of the GOP.

While there are certainly some members of the House who both believe that Trump shouldn’t have been impeached and that Cheney shouldn’t have been punished for her vote, the better read of the vote is that given their preference, a large number of elected Republicans want to move past Trump. This is consistent with the pattern and practice of the Trump years, when it was well-known that elected Republicans would frequently condemn Trump in private and praise him in public.

They were afraid. Some were afraid of Trump’s supporters (a Democratic lawmaker alleged that some members of the Republican House were “afraid for their lives”), some were simply afraid to lose power, and some were afraid that if they defied Trump that they’d be replaced through primary contests by someone even more unreasonable, someone more dedicated to Trump and Trump alone.

What is to be done? For the GOP to revive itself as a healthy and decent political party after Trump, there is no choice— courageous Republican politicians will have to put the depth of Trump support to the test. That’s why it was important that Ben Sasse openly defied his state party’s effort to censure him for his opposition to Trump. In a video message, Sasse was blunt. “You are welcome to censure me again,” he said, “But let’s be clear about why this is happening: It’s because I still believe, as you used to, that politics isn’t about the weird worship of one dude.”

That’s why it was important to Liz Cheney—fresh off her decisive victory in the House conference vote—to go onto Fox News Sunday and clearly and unequivocally explain exactly why she voted to impeach Trump.

The ferocity of Trump’s support is not in doubt. The cruelty and fanaticism of many of his core supporters was clearly demonstrated on January 6th, and it’s been demonstrated on a daily basis in the national conversation since Trump announced his run for president.

But here’s what is in doubt—how widespread and enduring is the hold of a defeated president? After all, tens of millions of Trump voters also voted in years past for very different men—men like George W. Bush, the only Republican in almost four decades to win re-election and win a majority of the popular vote. Are they truly Trumpists now? Or will they ultimately prove that they remain Republicans and are ready to reclaim the party’s identity as the party of Lincoln and Reagan?

There’s only one way to find out. Put the voters’ commitment to the test. In the Senate trial vote, Republican Senators must draw the line in the sand. Vote to convict the president for his open and obvious abuses of power, recapture the GOP from Trump, and find out where the voters’ loyalty truly lies. 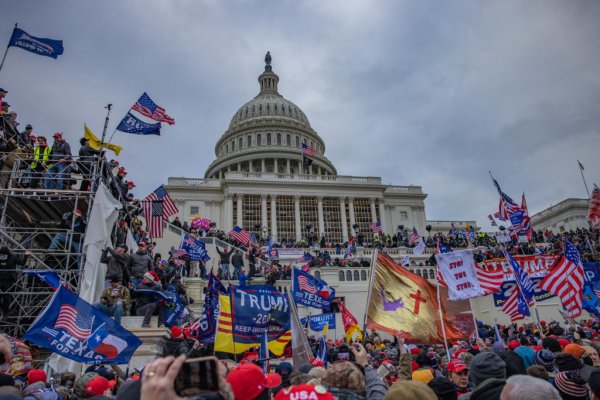 The Senate Must Choose Between Our Democracy and Trump
Next Up: Editor's Pick