President Joe Biden started out his speech laying a new vision for America’s place in the world with a dad joke — or, rather, a granddad joke. He compared his own advanced age to that of Benjamin Franklin, the father of U.S. foreign policy, and namesake of the grand hall where the 78-year-old President was giving his first foreign policy address. Biden was appropriately sheepish in his delivery, and limited cameras meant no lingering shots to capture possible eye rolls from his staff.

The speech covered a lot of familiar ground. Biden echoed his campaign language of promising to confront China on economic abuses and human rights and asserted that the days are past “of the United States rolling over in the face of Russia’s aggressive actions.” Even the newsiest passages — stopping certain arms sales to Saudi Arabia and raising the numbers of refugees allowed into the U.S. — had been previewed by his staff for weeks.

Foreign diplomats in Washington quietly welcomed the speech as a return to normalcy. The guy at the top laid out in public exactly what his team had been telling them behind closed doors. That was increasingly not the case toward the end of the previous Administration, as former President Donald Trump’s frenetic policy flip-flops left his most senior staff scrambling to figure out what he meant, whether he was serious, and how to explain the sudden change to panicked foreign counterparts. More than one considered resignation on a near-daily basis.

That’s why Biden’s speech was aimed not just at a foreign audience, but at the long-suffering State Department employees who’d survived being derided by Trump as the “Deep State Department.” More than 13% of senior foreign service officers left during the Trump Administration, according to the American Foreign Service Association (AFSA), the employment union for the foreign service. Many senior posts were left vacant or filled by “acting” officials in Trump’s waning months, according to multiple reports including one by the Senate Foreign Relations Committee. Trump’s second Secretary of State Mike Pompeo infamously fired the department’s Inspector General, a confirmatory coda to the foreign relations committee’s findings that State employees feared reprisal from 2016 to 2019 for reporting suspected violations of law.

In modern history, there have never been fewer U.S. foreign service officers deployed overseas as there are now, says Amb. Eric Rubin, president of AFSA. He says for the first time since World War II, the U.S. has been surpassed in its global diplomatic presence by another country — China. And the senior foreign service corps looks very little like the country it represents. It’s “90% white and two-thirds male,” Rubin says. “It was literally better under the Reagan Administration.”

Biden told the surviving staffers Thursday that he values their expertise and pledged that he will “have your back.” Rubin says the speech went over well in State’s ranks, as did Biden’s choice to first meet with 50 foreign service officers, and more than a hundred more virtually, before he went to the gilded Benjamin Franklin room to give his speech. “Trump never spoke to State Department staff, to my knowledge,” Rubin says.

Biden also told them he’d elevated one of their own, foreign service officer Timothy Lenderking, to the high profile position as special envoy to Yemen, whereas such roles are often given to political appointees. State Department spokesman Ned Price said Friday, in an answer to a TIME question, that more foreign service officers would be elevated to senior positions in the coming weeks.

Biden has also kept on a few of Trump’s political appointees, a stark contrast from his predecessor who forced every Obama appointee to resign on day one of his Administration, according to Rubin. To staff, that’s another important message that this State Department will be about the work, not who you voted for. “There are just a small handful of officials, both in this building and in ambassadorial posts around the world, who the Secretary of State has asked to remain because of the distinguished work they have done, because of the continuity we need in key area,” Price said.

That includes U.S. envoy to the Afghan peace talks Amb. Zalmay Khalilzad, despite the Trump whisperer status he gained in his determination to make a peace deal with the Taliban. Detractors say Khalilzad sold out the Afghan government to get the historic deal on paper, which amounts to a precipitous and dangerous withdrawal of U.S. troops before the country is stable. Price said now wasn’t the time to change the top negotiator, ahead of the May deadline for U.S. troop withdrawal, with no sign that the Taliban is keeping up its end of the bargain to reduce violence. “We’re at a very delicate moment, as we look forward to May,” Price said.

Blinken reinforced Khalilzad’s place on the Biden team by tweeting out a photograph of the two men meeting in a richly appointed State Department office. Both men were masked and seated at a social distance before a marble fireplace, turning toward each other with mirrored body language of hands clasped in laps. It’s the kind of photo diplomats release of meetings with foreign counterparts to signal “we’re all on the same side.” The photo prompted one former Afghan diplomat to ask, “Is he a U.S. envoy or a foreign leader?”

Green-Beret-turned-hostage-envoy Amb. Roger Carstens will also stay on in his role as Biden’s chief hostage negotiator, Price confirmed this week. “We think it’s important that there be continuity there,” Price said in answer to a TIME question, later adding that Carstens “has the respect and trust of the families of Americans who are detained overseas.”

While keeping some political appointees in sensitive jobs during a transition is standard, the departure from most recent practice has been noted, signaling America’s diplomats were no longer the “presumed enemy” of its President, as one U.S. ambassador described their status to TIME under the Trump years. And for State Department employees who have hung on through what some have called a four-year witch hunt, it means going to work and focusing on their jobs — not watching their backs. 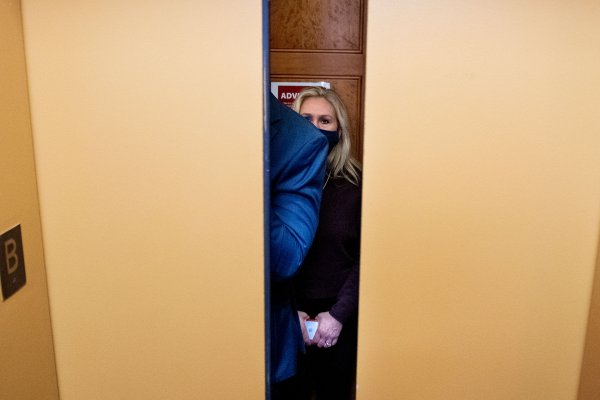 Borrowing From Donald Trump’s Playbook, Marjorie Taylor Greene Loses Her Assignments but Builds Her Power
Next Up: Editor's Pick