President Joe Biden has announced that the U.S. will no longer support Saudi Arabia’s offensive military operations in Yemen, ending a policy that began under former President Barack Obama and continued through the Trump Administration, despite mounting civilian casualties and widespread alarm in the international humanitarian community.

“This war has to end,” Biden said during his first address to the State Department on Feb. 4. “And to underscore our commitment, we’re ending all American support for offensive operations in the war in Yemen, including relevant arm sales.”

Saudi Arabia and the United Arab Emirates launched an incursion into Yemen in 2015, ostensibly to combat the Iran-backed Houthi rebel movement. Initiated by Crown Prince Mohammed bin Salman, the offensive has received U.S. backing in the form of intelligence, military advice, and logistical support even as reports emerged of coalition strikes hitting schools, hospitals, and wedding convoys.

Trump continued to furnish support, despite the U.N.’s determination that both the coalition and the Houthis were responsible for horrific humanitarian atrocities. In May 2019, Trump vetoed a series of measures approved by bipartisan lawmakers that were aimed at blocking the sale of weapons to Saudi Arabia. Shortly before leaving office, former Secretary of State Mike Pompeo designated Yemen’s Houthi rebels a foreign terrorist organization, despite warnings from humanitarian agencies that doing so would hamper aid deliveries to those most in need.

While Biden announced certain weapons sales to Saudi Arabia would end, he also said that the U.S. would continue to support its ally’s defense of its sovereign territory and population from missile attacks, drone strikes, and other threats posed by “Iranian-supplied forces in multiple countries.” The new approach would not impact U.S. operations against the Yemen-based al-Qaeda in the Arabian Peninsula (AQAP), National Security Adviser Jake Sullivan said. The Biden Administration is currently reviewing the designation of the Houthis as a foreign terrorist organization, but late last month authorized financial transactions with the Iran-allied group to let aid flow.

The six-year war in Yemen has helped create what the U.N. says is currently the world’s worst humanitarian crisis. Today, 24 million of Yemen’s 29 million people need humanitarian aid, and 20 million have no access to clean water. Half of Yemen’s children are malnourished and the U.N. is predicting the nation could face famine early this year.

Yemeni journalist Tawakkol Karman, who was awarded the Nobel Peace Prize in 2011, told TIME she welcomed Biden’s announcement, as well as his appointment of a special envoy to Yemen, which she said constituted “an important and significant step to end the war and bring peace to Yemen.”

TIME spoke with Britain’s former Foreign Secretary David Miliband, now CEO of the International Rescue Committee (IRC), about what Biden’s announcement might mean for Yemen’s future, and what still needs to be done. This interview has been edited for length and clarity.

You’ve called President Biden’s shift from “a failed war strategy” to “a comprehensive diplomatic strategy” an important first step. What should be the next step?

We think that four things are absolutely key. One: a ceasefire that is effective in the country. Secondly, the infusion of humanitarian aid because the U.N. call for $3.5-billion aid is only 40% funded. Third, a clear decision to reverse the designation of the Houthi rebel movement as a global terrorist force, because that makes commercial and humanitarian work impossible. Fourth, a sustained and effective political process to bring an enduring peace beyond the ceasefire.

Are you already seeing the effects of Mike Pompeo’s designation of the Houthis as a global terrorist force impacting aid access in Yemen?

It’s played out as a further constraint on economic activity. It hasn’t yet played out on the humanitarian front because an extra month of humanitarian exemption was given by the Biden Administration in one of its first days in office. There’s an urgent need to revoke the designation and give clarity not just to humanitarians that they won’t be contravening U.S. law, but also to private sector actors.

Will the U.S. ending support for the Saudi-led offensive materially change the situation on the ground?

I think this is a significant move, both in substantive terms and in political terms. In substantive terms, there are American jets, American engineers, American parts. So this is serious. It is important. In political terms, the Administration is signaling very clearly that it wants a different approach. The U.S. went into this with Saudi Arabia in 2015, and it is now calling for a change of course—well beyond the time that not just the humanitarian damage of the current war strategy was clear, but also the failure of the war strategy to deliver on the military goals that had been set.

A U.K. court ruled in 2019 that selling British weapons to Saudi Arabia for use in Yemen was unlawful, yet the U.K. government resumed arms sales. How important is it that the U.K. now follows in America’s footsteps?

It’s very important that the U.K.—which is the “penholder” at the United Nations on the Yemen file—joins this new move. In British law, there is a bar on the sale of arms for external aggression or internal repression. So, I don’t see how Britain can sustain its position of selling arms for use in this conflict for offensive purposes. The strategic failure here should be as galling as the humanitarian catastrophe is appalling. The strategic failure is that far from weakening Iran; Iran is in a stronger position today. Far from rolling back the rebel advance that started in 2014, the rebel movement is in charge of 80% of the country. The humanitarian effort can be better funded, but it can only be fully effective if a durable peace is built.

Last month, two Yemeni families petitioned the U.S. government over drone strikes that killed 34 of their relatives between 2013 and 2018. Should the Biden Administration also address the ongoing drone warfare program that began under former President Obama?

There is a global challenge to take on impunity in war zones. Impunity is the abuse of laws of war that give rights to civilians and international norms that are designed to buttress them. It’s very important that the U.S., as the most powerful democracy in the world, upholds values that are core to its identity, and laws that were hard-won after the Second World War. I haven’t got experience of this individual case, but what I do know from Yemen and from Syria is that civilians are being targeted in ways that are completely antithetical to international humanitarian law, and there must be accountability for that.

Biden tapped Timothy Lenderking as his new Yemen envoy. While Trump was in power, Lenderking gave the Saudi-led coalition “just above a passing grade” for their attempts to limit civilian casualties. What do you make of that assessment and his appointment?

The appointment is obviously very good news. He’s a respected, serious U.S. diplomat who really knows the issues. He knows the U.S. system but he knows the region as well. When it comes to civilian casualties, there have been way too many. Some of them have got coverage, like the 43 children killed in a coach in northern Yemen. Others have died without any coverage at all. That’s not just a tragedy, that’s a crime.

What responsibility do the U.S. and Saudi Arabia and the United Arab Emirates have for Yemen’s reconstruction, given the coalition’s attacks on civilian infrastructure?

I think that Yemen at the moment is a stain on the whole international system. It’s going to have to take a global effort as well as regional effort to get it on its feet. 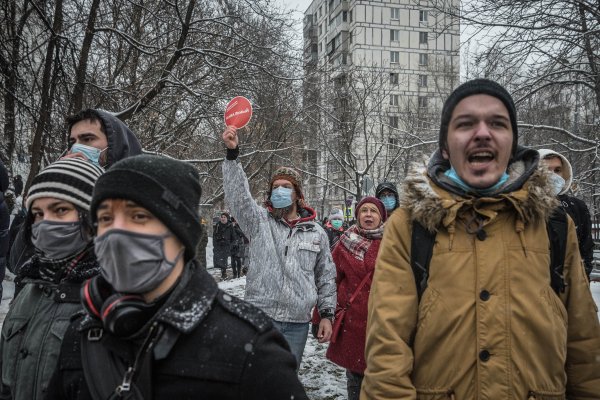 The Russia Protests Are About More Than Just Alexei Navalny
Next Up: Editor's Pick