State Budgets Are In Tatters. Republicans in Washington Say Too Bad

Texas Gov. Greg Abbott speaks during a news conference where he provided an update to Texas' response to COVID-19 in Austin, Texas on Sept. 17, 2020.
Eric Gay—AP
By Philip Elliott

Back in May, Texas Gov. Greg Abbott looked around and saw few reasons to think his state would make a speedy recovery from the COVID-19 pandemic. He had closed schools in late March and issued a stay-at-home order in April. But his fellow Republicans were antsy, so he first allowed malls, restaurants and movie theaters to reopen with limited capacity. Then, even as the state was seeing record deaths, gyms and hair salons followed. Cases started to inch higher and higher.

Abbott was getting battered from all angles as his state became the poster-child for bad coronavirus policy. His poll numbers looked like they were heading into a slump. His admission that things were spiraling only added headaches. “The fact of the matter is, pretty much every scientific and medical report shows that whenever you have a reopening — whether you want to call it a reopening of business or just a reopening of society in the aftermath of something like this — that it actually will lead to an increase in spread,” he said on a recorded call with lawmakers from May.

But he could handle the bad press. It was the economy he was worried about. Money was expected to be tight in state funds, so he ordered almost everyone in his administration to cut 5% from their budgets. When Texas’ budget chief released his twice-a-year fiscal update in July, it included a shocking revelation: Texas’ two-year budget was on track to pile up a $4.6 billion deficit by the time it ends in August of this year. (Texas’ fiscal year is September to August.)

Texas’ story is not unique. It’s just on a bigger scale than most. Almost 4.3 million unemployment claims have been filed in Texas since the pandemic began, according to an Urban Institute tally. It took Texas just 17 weeks to match the total number of jobs lost in the state during the 81-week Great Recession. And when people aren’t working, they aren’t paying taxes.

Which brings us to the latest debate in Washington: Just how much — if any — money do state and local governments get in the next round of coronavirus relief?

States like Texas are the norm, running massive rivers of red ink in systems that forbid debt-riddled budgets. Even so, Texas is probably in less of a pickle than most. It has a rainy-day fund of more than $10 billion that will allow it to keep the lights on without another cent coming through the door for about 70 days. But the median state has just 27 days worth of spending banked, according to Pew Research. Five states — Pennsylvania, New Jersey, Kentucky, Illinois and Kansas — have less than a week of padding.

That means this year’s drastically reduced tax revenues are hitting state capitals hard. So far, Congress has allocated $340 billion in COVID-19 relief funds for state and local budgets. These dollars pay for public health officers, police patrols and EMTs. The states have been vocal in saying they need more in the next round, which President Joe Biden and Democrats in Congress are now preparing to push through without GOP backing. The latest package contains $350 billion for states and cities, $160 billion for health care costs and $130 billion for schools.

Support for local help is bipartisan and broad. Yet Republicans have been reluctant to run up the cost for these packages. They say the costs are too high and the mandate too far-flung, such as an initial call for a $15-an-hour minimum wage and provisions for climate change. They also say the bucks are expensive bailouts for badly managed Blue States.

Well, tell that to Texas. Even with its impressive rainy-day fund, its state budget is a wreck. It’s the same elsewhere, and in most cases the local politicians who need the help are Republicans. GOP Governors run 27 states. Of the 99 state legislative chambers, Republicans control 61 of them. A majority — 54% — of state lawmakers are members of the GOP. And red ink drags down legislation no matter if the lawmaker’s jersey is red or blue. Major cities tend to have Democratic mayors, however, and that’s a sore point to rural Republicans.

Revised Texas numbers from last month suggest a less-bad place than anticipated: it’ll end the two-year budget with only $1 billion in the red. Still, it’s a massive pile of receipts that need handling. Texas, with the second-largest public employee workforce in the country, has seen its share of cuts. During calendar year 2020, Texas cut more than 54,000 state and local public employees. Without some help from Washington, there’s no way that number doesn’t continue to climb — right as those same workers are crucial cogs to vaccine distribution. 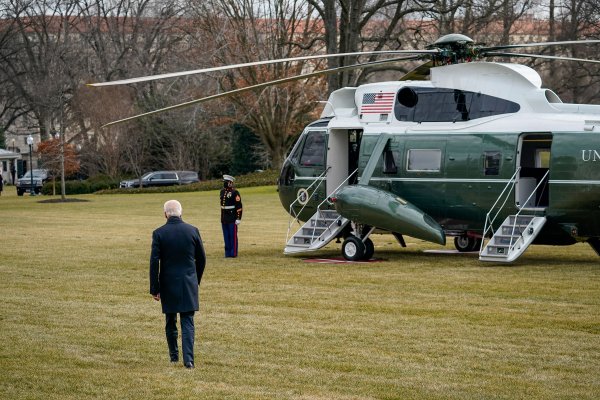 More Americans Expect to Lose Influence Under Biden. Here’s Why That’s a Problem
Next Up: Editor's Pick