A researcher holding one of America's most priceless negatives, the glass plate made by famous civil war photographer Mathew Brady of Abraham Lincoln in 1865 just before the 16th President of the United States was assassinated. It is stored in the National Archives in Washington.
Three Lions/Getty Images
By Olivia B. Waxman

Whenever there is a time of crisis and uncertainty in America, one thing is certain: Abraham Lincoln is going to get quoted—a lot.

In the wake of the Jan. 6 insurrection at the U.S. Capitol and lawmakers debating on impeaching Donald Trump for a second time during his last days in office, politicos on both sides of the aisle have claimed that the Civil War President would be on their side. When asked at a Feb. 4 press conference “why bother” going through with a second impeachment trial for the former President, House Speaker Nancy Pelosi said “Ask Abraham Lincoln…You cannot go forward until you have justice.” Before Trump’s second impeachment trial started, Republican National Committee chair and Trump supporter Ronna McDaniel urged Biden and Senate Democrats to “heed Lincoln’s words” and forego the trial to “bringing our badly divided country together.” In Dec. 2019, a group of Republicans announced the founding of The Lincoln Project in the last year of the 2020 presidential campaign as an effort to defeat incumbent President Donald Trump and restore the Republican party’s reputation as the party of Lincoln.

As Lincoln’s birthday on Feb. 12 and Presidents’ Day on Feb. 15 approaches, historians look back at the most notable recent uses and misuses of “the Great Emancipator’s” words. According to these historians of the Civil War and Reconstruction, Lincoln might not have been saying what people think.

“You cannot freeze him at any moment. He was evolving during the whole course of his career,” says Eric Foner, a historian at Columbia University. “To try to hold him immobile, you miss the essence of Lincoln.”

Lincoln delivered his often-quoted first inaugural address during a chaotic transition of power similar to 2021’s, right after the secession of seven U.S. states that feared he would abolish slavery. “We are not enemies, but friends,” he said on Mar. 4, 1861. “The mystic chords of memory, stretching from every battlefield and patriot grave to every living heart and hearthstone all over this broad land, will yet swell the chorus of the Union, when again touched, as surely they will be, by the better angels of our nature.”

While many have used this last line as a plea for unity— as quoted by Republican Minority Leader Kevin McCarthy who argued, “our place in history depends on whether we call on our better angels” in a statement against impeaching Trump again—it might not have been the whole of Lincoln’s intention. Back then, Lincoln was appealing to people in southern states that hadn’t yet joined the Confederacy.

Lincoln’s words are often used in the spirit of compromise, though historians say the President was vocally steadfast about his values. He wouldn’t back down on the pledge that won him the 1860 presidential election: prohibiting slavery in new federal territories. The seven states that seceded before Inauguration Day 1861 interpreted that policy position as the first step to abolishing slavery altogether.

“Very often…he’s being quoted as a conciliator, a compromiser—compromiser in the good sense—someone who could see all sides of an issue and come to some kind of middle way,” Masur says. “And I think that really sells Lincoln short and doesn’t actually represent what kind of a President he was… He indeed was able to compromise. But he also took very strong stands on controversial issues, especially as the war went on.”

This side of Lincoln also tends to get lost when calls for unity quote his second inaugural address from 1865, saying “with malice toward none, with charity for all” and “let us strive on to finish the work we are in; to bind up the nation’s wounds.” During the debates on whether or not to impeach Trump a second time, the Republican House Minority Whip Rep. Steve Scalise quoted those lines to argue against a rushed impeachment and for moving forward.

“What bothers me the most is the way in which people today remember Lincoln as mainly a forgiving peacemaker and quote him selectively instead of as the President who made ‘total war’ upon slavery and understood the Civil War as divine judgement for the national sin of slavery,” says Manisha Sinha, a historian at the University of Connecticut.

In that second inaugural speech, Foner notes, “Lincoln is saying with reconciliation must come accountability and justice, that you can’t just say, ‘let’s forget about the past, let’s forget about our conflicts and move on.’ That wasn’t what he was saying at all.”

But in the years after Reconstruction, instead of accountability and justice came more injustice for Black Americans.

“The eventual reconciliation, when it came in the 1890s, really was a reconciliation of whites, Northern whites, Southern whites, with racism being a principle that brought them together,” says Foner. “The people left out of the reconciliation were Black Americans, whose rights were systematically being stripped away, as white North and white South came to feel a sort of commonality of outlook and interest.”

Speaking out on slavery as the real cause of Civil War in his second inaugural speech, and later calling on limited suffrage for Black Americans in his last public address on April 11, 1865, would cost Lincoln his life. Afraid that Lincoln was going to enfranchise all Black men, John Wilkes Booth assassinated him on April 14, 1865.

“He becomes the first American president to publicly endorse Black citizenship, and he’s killed for that. That’s the Lincoln we don’t know and we ought to know more about it,” says Sinha.

Americans have looked to Lincoln as an example of a leadership during a national crisis, and he loomed large in the 1930s, whether through a mural commissioned by the Works Progress Administration or in movies like John Ford’s Oscar-nominated Young Mr. Lincoln, starring Henry Fonda as Lincoln. TIME put writer Carl Sandburg on the cover of the magazine in 1939 because of his new four-volume biography, which portrayed Lincoln as “a manual of political behavior for men in any time.”

“Lincoln is almost more prominent a figure in the 1930s than he was when he was alive and President in the 1860s,” says historian Nina Silber at Boston University and author of This War Ain’t Over: Fighting the Civil War in New Deal America. He became “such an important figure for the Depression because he comes from this poor background, and he struggles his way out of it.”

President Franklin D. Roosevelt used Lincoln as the face of the New Deal and, in a 1939 speech, Roosevelt described Lincoln as an “emancipator—not of slaves alone, but of those of heavy heart everywhere.”

“[Roosevelt] doesn’t want it to get too tied up just with issues of race and slavery because that would make Lincoln’s appeal too narrow for what Roosevelt’s trying to do, which is why I think he tries to morph it into, ‘It wasn’t just about slaves; he cared about everybody,'” Silber explains.

During the 1960s, civil rights leaders looked to Lincoln as a representative of a promise of the Emancipation Proclamation still unfulfilled a century after the abolition of slavery, when full racial equality had yet to be achieved. On Aug. 28, 1963, addressing the crowd at the March on Washington from the Lincoln Memorial, Martin Luther King, Jr., kicked off his “I Have a Dream” speech by saying, “Five score years ago, a great American, in whose symbolic shadow we stand today, signed the Emancipation Proclamation. This momentous decree came as a great beacon light of hope to millions of Negro slaves…One hundred years later, the Negro lives on a lonely island of poverty in the midst of a vast ocean of material prosperity.”

Nearly 50 years later, in 2009, former President Barack Obama seized on the moment to symbolize how far the nation had come by taking an abridged version of the train ride Lincoln took to his first inauguration and taking the oath of office with his hand on Lincoln’s Bible.

In his 2021 inaugural address, President Biden quoted Lincoln’s statement on the signing of the Emancipation Proclamation, saying “my whole soul is in it.”

Thavolia Glymph, a historian at Duke University, notes a caveat to Biden quoting Lincoln in this way, pointing out that while Lincoln was clear about the need to stop the spread of slavery, he was not clear about what a society of full racial equality would look like.

“Standing alone as Biden spoke it, without context, it might appear that Lincoln had always been in favor of a program of uncompensated emancipation and that did not seek the removal of the emancipated; that he had always favored a Union in which Black people would have equal rights. That would be ahistorical,” Glymph wrote in an email. “By Jan. 1, 1863, Lincoln’s heart was in it, but it had taken a lot of work for him to get there. Also, there was no reason for Lincoln to think that the Emancipation Proclamation would unite the country, the meaning implied by Biden. He hoped it would help the North defeat the states that had formed the Confederacy or what Lincoln referred to as ‘the seceded States, so-called.’”

To historians like Masur, true progress also ultimately involves expanding the pantheon of quotable American heroes and talking about American history beyond one-line quotations. After all, the more complicated aspects of Lincoln’s career tend to get “erased” when history is distilled to one-line quotes in a speech, like his role in the largest mass execution in American history, the execution of 38 Dakota warriors in 1862.

“I would like to live in a world where instead of always reaching for the Lincoln quote, people also reach for quotes from women of all kinds and people of color equally often…” says Masur. “The tendency to go to Lincoln or FDR or George Washington or whatever, I find it kind of tiresome, to be honest. Even though granted, Lincoln was incredibly smart and a great writer and super quotable, so I get that. But Lincoln himself was complicated, right? He advocated colonization. He had a hard time imagining what it would be like to have the end of slavery and also racial equality. He came around to that slowly, if at all. There are figures from the 19th century from Lincoln’s era, both black and white, who had more progressive views on slavery and on race—as a white person, take William Lloyd Garrison, as a black person, Frances Harper or Frederick Douglass. These people were much more kind of radical advocates of racial equality and liberation than Lincoln was.” 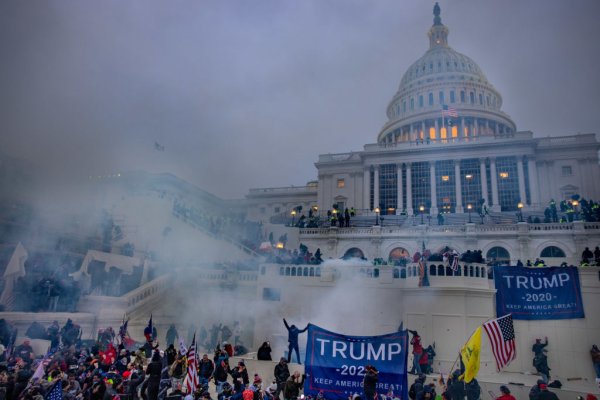 The Impeachment Trial Is the Ultimate Test
Next Up: Editor's Pick