Why TIME Partnered with Ibram X. Kendi to Recognize the Black Renaissance

When historian, TIME 100 honoree and How to Be an Antiracist author Ibram X. Kendi approached TIME with the idea to partner on a project about marking this moment as a Black cultural renaissance, the most challenging question we faced was how to choose which of the innumerable artists and works across poetry, film, television, music, theater and more to highlight. In his incisive introductory essay, Kendi writes that during this rich period, spanning approximately the past six years, Black artists have forged a new path, casting off the pressures to consider the reactions of white people or to “represent” race by attempting to speak for all Black experiences.

The package includes a conversation between former First Lady Michelle Obama and National Youth Poet Laureate Amanda Gorman, a young torchbearer of this renaissance who captivated the nation with her inspiring performance at the Inauguration of President Joe Biden and Vice President Kamala Harris. Three of today’s most accomplished novelists—Brit Bennett, Jasmine Guillory and Jacqueline Woodson—gather in a roundtable discussion with Rebecca Carroll about the difference between a renaissance and a trend as well as the power of their storytelling. TIME staff writers Josiah Bates and Andrew R. Chow explore how Black creators in film and television are reclaiming aspects of U.S. history—from the Tulsa race massacre to the Black Panthers—that have been misrepresented or omitted entirely in our education system and media. And a panel of eminent artists including Oscar-nominated director Ava DuVernay, Pulitzer Prize-winning playwright Lynn Nottage and National Book Award winner Jesmyn Ward help curate a list of the 25 defining works of the era. Special thanks to senior editors Eliza Berman, Lucy Feldman, Lily Rothman and international art director Victor Williams for shaping these multimedia projects.

Photograph by Awol Erizku for TIME

The portrait of Gorman that appears on the cover of this magazine was taken by another extraordinary young artist, Awol Erizku, whose art spans painting, photography, sculpture and film. Erizku rarely accepts commissions as a photographer, so we were thrilled he agreed to meet Gorman in Los Angeles on Jan. 29.

For the cover portrait of Gorman, he says, “I wanted to extricate her from the political dimension and immerse it in a more cosmic atmosphere to add to the weight of her words.” Erizku also directed one of the videos for this package, of Gorman reciting her stirring poem, “The Hill We Climb.” You can watch it at time.com/gorman 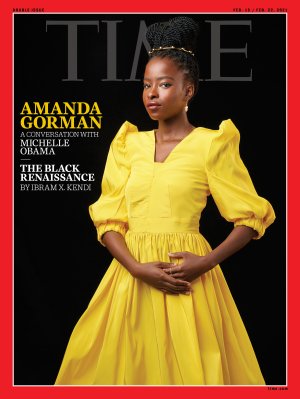 The Story Behind TIME’s Amanda Gorman Cover
Next Up: Editor's Pick