What to Know About the Book Behind Netflix’s Firefly Lane

At the center of Netflix’s Firefly Lane are Kate and Tully, a pair of inseparable best friends who meet in 1974, when they’re 14 years old. For decades to follow, they are there for each other through all the hardships that accompany growing up and growing older, despite the radically different choices they make as adults.

The show, which debuts on the streaming platform on Feb. 3, is based on the 2008 novel of the same name by Kristin Hannah. Netflix’s ten-episode series traces more than 30 years of friendship between the outgoing, carefree Tully (Katherine Heigl) and her quieter, more grounded counterpart Kate (Sarah Chalke). The show moves between the 1970s, 1980s and early 2000s to reveal all the ways their lives intersect as the two pursue careers in journalism, with Tully becoming an Oprah-like personality and Kate stepping away from the broadcast world when she becomes a mother. Firefly Lane captures the big and small moments that punctuate their lives: their experiences as teenagers, their messy romances and their quick banter about everything from boys to ambition to parenting. But, as teased throughout the series, a betrayal occurs that appears too large to overcome, and as adults later in life, Kate and Tully are no longer friends.

Showrunner Maggie Friedman was drawn to the project after hearing about the premise of the book, and was excited to tell a story centered around female friendship. In an interview with Netflix, Friedman explained that the power of these friendships are what help shape our lives. “Your soulmate isn’t necessarily the person you marry or fall in love with,” she said. “Maybe you’ll watch it, and afterward you’ll call your best friend and tell her you love her.”

Here’s what to know about the Firefly Lane book that inspired Netflix’s new show, as well as more on author Kristin Hannah and her hugely popular catalog of bestselling novels.

What to know about the novel Firefly Lane

While both the book and series cover more than three decades of Kate and Tully’s friendship, they do so in different ways. The series jumps between timelines, with each episode featuring scenes with the characters as teenagers, young adults and adults. The book has a more linear structure, beginning in the 1970s when Kate and Tully first meet in the eighth grade and tracking the progression of their relationship as the two grow older.

While the Netflix adaptation does not strictly follow its source material, it stays true to the evolution of both characters as described in the novel. Tully’s tumultuous childhood leaves her in constant search of love and approval while Kate’s shy demeanor holds her back from going after what she really wants. In both the book and series, their coming-of-age cements a friendship that provides the stability Tully craves, and the gentle push out of her comfort zone that Kate needs. Judging by the major events that happen in the book that aren’t covered in the series, it seems the creative team will have plenty of plot points to dole out if the show receives more seasons.

Both the series and book span decades following the friendship between Tully (Katherine Heigl) and Kate (Sarah Chalke)
COURTESY OF NETFLIX—© 2020 Netflix, Inc.

Kristin Hannah’s novel debuted in 2008 and became a bestselling hit. Like Hannah’s other work, Firefly Lane was (and still is) a favorite for book club discussions. The novel is not based on a true story, but Hannah drew inspiration from her own life growing up in the 1970s as well as her experiences at the University of Washington (Firefly Lane takes place in Seattle). On her website, Hannah wrote a list of locations that she used in the book for anyone “interested in a Firefly Lane memory lane tour.”

In 2013, Hannah wrote a sequel to Firefly Lane focused on Tully’s backstory and her relationship with her mother. That book, Fly Away, also features Kate’s 16-year-old daughter Marah as she navigates the aftermath of the events of Firefly Lane. Like its predecessor, the sequel is centered on motherhood, loss and love, and is primarily told in flashbacks to reveal how all the characters are coping with what happens at the end of Firefly Lane, reuniting Tully, Marah and Tully’s mother. “The biggest question that came from Firefly Lane concerned Tully’s mom, Dorothy. She was a really screwed-up character and a terrible mother,” Hannah told Book Reporter in a 2013 interview. “My readers wanted to know why, and so did I.”

What to know about Kristin Hannah and her upcoming projects

Kristin Hannah published her debut novel, A Handful of Heaven—a romance story set in Alaska—in 1991. In the years that followed, she published 23 more novels, including Firefly Lane, to huge commercial success. Her 2015 historical novel The Nightingale, which details the lives of two sisters trying to survive in World War II France, sold more than four million copies globally, was on the New York Times bestseller list for more than 100 weeks and has been published in 45 languages. Sony’s Tristar Pictures acquired the movie rights to the book and announced in 2016 that Michelle MacLaren (whose TV credits include Game of Thrones and Breaking Bad) would direct the feature. Sisters Dakota and Elle Fanning are set to star in the adaptation—the film was supposed to arrive at the end of 2020, but after being delayed due to COVID-19, is currently slated to debut at the end of this year.

And that’s not the only film adaptation of Hannah’s novels in the works. The movie rights for Hannah’s 2017 family saga The Great Alone, another novel set in Alaska, were bought by TriStar in 2018. Screenwriter Julia Cox is set to adapt the novel, according to TheWrap.

Tully (Katherine Heigl) and Kate (Sarah Chalke) navigate the turbulence of life together until a betrayal sets them apart
COURTESY OF NETFLIX—© 2020 Netflix, Inc.

Just before the release of Firefly Lane on Netflix, Hannah published her 24th book, The Four Winds. The novel is set against the backdrop of the Great Depression and tells the story of a single mother who leaves her family farm in Texas for California. As in Firefly Lane, the new novel mines the power of friendship. In a recent interview with the New York Times, Hannah discussed this hallmark of her fiction: “I deeply value my female friendships. That’s something that has been reinforced in this pandemic.” Ahead of its publication, the book’s publisher St. Martin’s Press planned to print one million copies.

What to know about the Netflix adaptation

Hannah is a co-executive producer of the Netflix series, but did not write the adaptation. In an interview with Parade, Katherine Heigl, who stars as Tully and is also an executive producer, noted that Hannah had a few stipulations regarding staying true to the novel. “But other than that, she was comfortable with our showrunner taking some creative license, which we did,” Heigl said.

Katherine Heigl and Sarah Chalke play versions of their characters in different stages of their lives
COURTESY OF NETFLIX—© 2020 Netflix, Inc.

The actor was brought onto the project first, and then Sarah Chalke was cast as Kate. Their onscreen chemistry was a pivotal part of the series, and Heigl told Parade that their connection came quite naturally. “She’s just an effortlessly good person. So that’s really easy to be around, and I don’t feel like I have to be super guarded around her, or watch my back,” Heigl said. “She’s just a very good person and very supportive.”

While there is no word on whether there will be another season of the series, Heigl told the Washington Post in a recent interview that she has her “fingers, toes, everything crossed” that it gets picked up for more seasons. 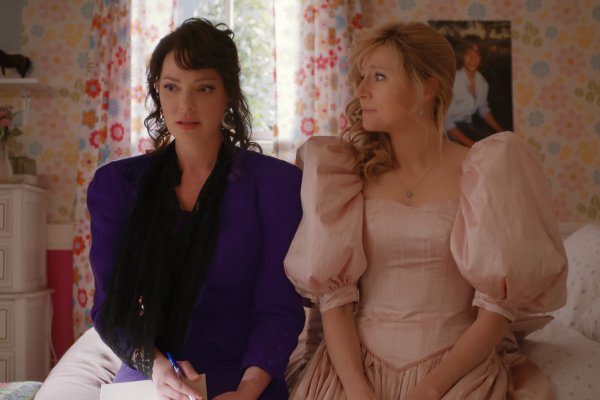 Netflix's Firefly Lane Is Cheesy But Lovable
Next Up: Editor's Pick