Biden's Biggest Climate Move: Signaling that Fossil Fuels Are Not the Future

As the reality of climate change has grown increasingly urgent over the past several decades, the business leaders, politicians and government officials aware of the threat have largely played a game of wait and see, avoiding the financial costs and political pitfalls of being the first movers on the issue.

On Wednesday, a day dubbed “Climate Day” by the Biden Administration, the President sought to end the federal government’s waffling with a flurry of directives that went further than any previous administration. The move was no surprise — Biden had proposed those measures on the campaign trail and repeatedly promised to follow through on them — but nonetheless it sent the strongest market signal yet that the U.S. will undergo the difficult task of revitalizing its weakened economy with climate change in mind, a reality that will reshape how communities across the U.S. think about energy, how global companies do business and how developing countries plan their development.

“The most important signal is not any specific policy,” said Sen. Sheldon Whitehouse, a Rhode Island Democrat, on the floor of the Senate Wednesday. “But the breadth of the scope, of the emphasis on climate across the new Biden Administration.”

By design, the measures launched Wednesday touch virtually every corner of the administration. The central executive order calls for prioritizing climate change as an “essential element of U.S. foreign policy and national security,” formally launching a U.S.-hosted climate summit for world leaders and ordering a review of how climate change affects national security. The order directs federal agencies to buy American-made electric vehicles. And it halts new auctions to lease federal land for the purposes of oil and gas drilling. The list goes on. “It’s not time for small measures,” Biden said before signing the order. “We need to be bold.”

Biden’s remarks — in tone as well as substance — communicated a sea change in how the U.S. government will approach global warming, not just compared to the posture of the Trump Administration but also to that of Obama. Biden accused the Trump Administration of picking “Big Oil companies over American workers.” He called for an end to fossil fuel subsidies. And he demanded that the federal government focus much of its investment in communities where people have been disproportionately hit by the effects of pollution and other environmental ills.

“Anyone still wondering about the extent to which this administration will prioritize climate got their answer today,” says Reed Schuler, who worked on climate in the U.S. State Department and advised the Biden transition. “What you see is a pivot from the climate policy debates of the past; the key is to use every lever at our disposal.”

The transition in corporate America and the financial sector toward climate-friendly practices has been equally slow. Ahead of the negotiations that led to the Paris Agreement, a small but powerful group of companies put their support behind a global climate deal that called on participants to reduce their emissions in line with keeping temperatures from rising more than 2°C. Over time, that coalition has grown. In the last two years, some of the world’s biggest companies —Amazon, Walmart and Shell, to name a few — committed to net zero emissions. Still, much of the economy lags, intent to continue making money with business-as-usual processes.

The Biden presidency has offered the ultimate signal to the markets that the transition away from fossil fuels needs to start for everyone — and now. During the campaign, as Biden’s victory appeared increasingly likely, banks and financial services firms touted the opportunity presented by green investing and warned of the risk posed to the energy sector. Investors followed, pouring billions of dollars into sustainable investment funds. Companies have also responded to Biden’s plans. Shortly after the presidential election, for example, GM dropped a lawsuit aimed at loosening vehicle emissions standards. On Thursday, less than 24 hours after Biden’s executive order, the company committed to eliminating its carbon footprint by 2040.

This year is “seeing all kinds of market signals—public sector and private sector signals—for change in a way we never have,” says Mindy Lubber, CEO of Ceres, a sustainability non-profit focused on the role of investors and businesses.

The message from Biden’s executive order was also received loud and clear in the oil-and–gas industry, though not received as well. Oil and gas leaders have taken particular issue with the moratorium on new oil and gas leases. Even though only 9% of U.S. oil comes from federal land, oil and gas companies already own leases they haven’t used, and recent auctions for new leases have received scant interest, industry leaders say Biden signaling a pivot away from fossil fuels is bad news for the industry. “The investment happens today for what they hope to be production years down the road,” says Stephen Waguespack, CEO of the Louisiana Association of Business and Industry, pointing to the potential effects on the industry in his state.

Biden’s sweeping approach to climate will inevitably face headwinds on Capitol Hill. Much of his executive action will be operative on its own, but further measures—including spending measures and comprehensive new programs—will need to pass a Senate that remains divided.

But at the moment, Biden’s signal seems to be working. Since 2012, Whitehouse, the Rhode Island Senator, has delivered more than 275 speeches from the floor of the Senate arguing that the federal government has been asleep at the wheel on climate change and that it was “time to wake up.” On Wednesday, shortly after Biden signed his executive order, he declared an end to that nine-year mission. “Instead of urging that it’s time to wake up,” he said. “I close this long run by saying, now it’s time to get to work.” 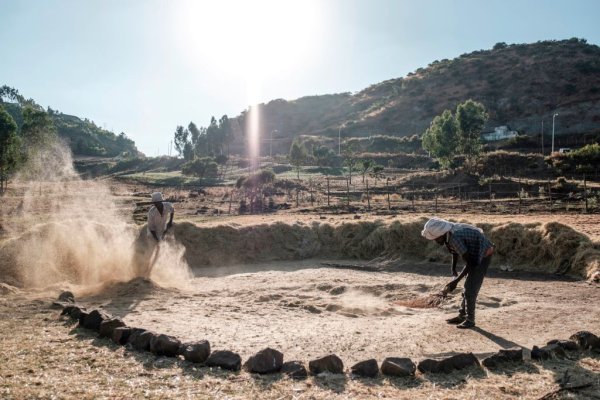 Agnes Kalibata, the UN's Food Systems Chief, on How Science Can Transform Farming to Help Save the Planet
Next Up: Editor's Pick