Every big event now has a picture or two that spins off into an internet meme. But what started as a series of photos of Sen. Bernie Sanders arriving at President Joe Biden’s Inauguration in typical Bernie fashion has evolved into so much more.

Serving what one Twitter user aptly described as “dressed to stand on line at the post office” chic, Sanders rolled up to Capitol Hill on Wednesday wearing a familiar beige coat, patterned mittens and a face mask, with a manilla envelope tucked underneath his arm. Strikingly casual amid a sea of inauguration day refinery, it was a look that immediately caught the internet’s eye.

Senator Bernie Sanders sits in the bleachers on Capitol Hill before Joe Biden is sworn in as the 46th U.S. President at the U.S. Capitol in Washington, D.C., on January 20, 2021.
Brendan Smialowski—AFP/Getty Images

The photo of Sanders making his way down the Capitol steps was enough to get the meme train rolling. However, once a second shot of the bundled up senator perched cross-legged on his socially distanced folding chair made its way online, the Democratic presidential primary candidate officially became the viral star of the day. It wasn’t long before Bernie memes were, to put it lightly, everywhere.

The story behind Sanders’ instantly iconic (and cold weather-practical) look also began to circulate. Internet sleuths quickly unearthed the fact that not only did Bernie appear to be wearing the same coat from his infamous “I am once again asking” campaign ad (a legendary meme in itself), but that his mittens had been gifted to him by a Vermont teacher who made them out of repurposed wool sweaters and recycled plastic bottles.

As the day wore on, social media creatives worked to evolve “Bernie Sanders in a Chair” beyond the confines of a standard meme. Mere minutes after Biden was officially sworn in as President, a Twitter user had already created a transparent PNG of the image to allow others to easily photoshop Bernie into whatever scene they wanted. Soon after, Bernie was popping up everywhere from the Last Supper to album covers to New York City street corners.

A few hours later, another ingenious Bernie fan had created a Snapchat lens that allowed users to place Bernie in a chair smack dab in the middle of their own homes (or anywhere else they happened to be). What better motivator to get some work done than the vision of a harried politician staring at you from across the room?

And why stop there? Soon, Bernie was going global thanks to a website created by Twitter user Nick Sawhney that let people insert Bernie into scenes from Google Maps Street View.

In the natural cycle of popular internet trends, Bernie in a chair was popping up on various forms of merch by the end of the night. You can now sip coffee out of a mug featuring Bernie and his mittens every morning if you so desire.

The only comment Sen. Sanders has made thus far seems to be a pretty on brand Instagram post. In a short video, he answers a question about his fashion by calling for the Senate to pass $2,000 coronavirus relief checks for every adult in America. 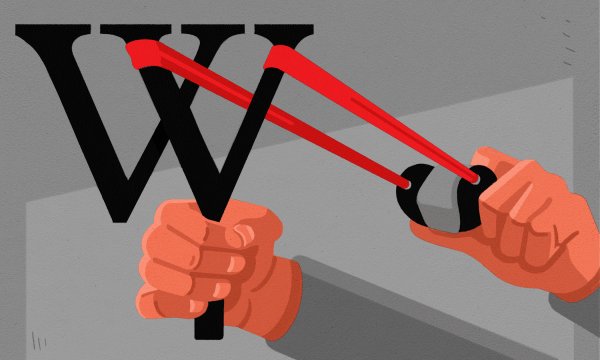 What if the Web Looked More Like Wikipedia?
Next Up: Editor's Pick