Members of the National Guard outside the Capitol in Washington on Jan. 19, 2021.
Dina Litovsky for TIME
By Simon Shuster and Kimberly Dozier

The reverend could hardly recognize the streets of Washington, DC, as he drove into town on Monday night, a draft of his Inaugural prayer tucked into a three-ring binder. The city looked more like a militarized zone than a free nation’s capital, the streets deserted except for Humvees and checkpoints, police and soldiers, many thousands of them, staring out through the metal walls that encircled downtown. “This is very different, a strange feeling,” says Reverend Silvester Beaman, who delivered the benediction at the Inaugural ceremony. “It just blows my mind.”

To him it also felt unfair. Instead of the vast crowds that typically gather to see a new President sworn into office, the National Mall was empty on Wednesday, undercutting Joe Biden’s promise of a return to normalcy in Washington. Keeping that promise will require the President to overcome two daunting crises: a pandemic that has claimed over 400,000 American lives, and the danger posed by the far-right supporters of his predecessor, Donald Trump, who incited a mob to storm the Capitol two weeks ago to the day.

The host of challenges facing the new administration not only robbed Biden of the ceremony and welcome an incoming President normally receives, they underscored how far the nation has drifted from normalcy in the final year of Trump’s tenure.

From his hometown of Wilmington, Del., Biden had hoped to travel to the Inauguration on his favorite means of travel—an Amtrak train, where regular riders had seen him for decades on his rides to work as a Senator. Due to security concerns, Biden began and ended his move to Washington on Tuesday inside the walls of military bases, not train stations. After delivering a farewell speech to his home state inside an Air National Guard base near Wilmington, he flew on a jet to Joint Base Andrews, the fortress from which Trump would depart for Florida the following day.

The few who did arrive by train at Union Station on Wednesday morning were greeted by an empty hall. Its entrance during past Inaugurations was draped with American flags, behind which the lanes of Delaware Avenue lead straight to the Capitol building. On Wednesday that street was blocked by a militarized checkpoint, where armed troops in masks and camouflage blocked the public from coming close. The only stars and stripes to be seen in the station’s grand entryway were the ones at Alamo Flags, a souvenir stand that had a few of them for sale. No one was buying.

A short walk away on K Street, near Black Lives Matter Plaza, hats stitched with Biden’s name were piled on a fold-out table, going for $20 apiece. Their vendor, a native New Yorker named Jerry, sold dozens of them by mid-morning during past inaugurations. This time he had sold only one, he said, because of the “unheard-of” levels of security. “Anyone that tries anything today, they gotta be out of their mind,” he said, declining to give his surname. “They have to have a death wish, because they will get killed.”

Near the Capitol, two security guards had a champagne bottle at the ready, so confident in the security measures that, by late morning, they were ready to start the party. “Nothing is going to happen today,” one of them said.

In the end, he was right. The rightwing extremists who had threatened to protest the Inauguration decided to stay away, though a few of their faces could still be seen on the FBI wanted posters plastered on D.C. bus stops, asking for information about the rioters who sought to block Biden from taking office. Instead, one of the U.S. Capitol Police officers who stood up to that mob, Eugene Goodman, escorted Vice President Kamala Harris onto Capitol grounds for the ceremony.

The sight of Harris on that stage—the first Black woman to hold the office of Vice President —eclipsed the day’s harsher realities, says Valencia Burse, who came to the Inauguration as part of Jennifer Lopez’s entourage. Back home in Atlanta, Burse’s seven-year-old daughter Payton would now have a role model in the White House “that has our color,” she said. “That represents us.”

She wasn’t the only Georgia native to make the trip. Salana Reed, a truck driver from Savannah, drove for eight hours on Tuesday to Washington, hoping that someone might invite her inside to see the ceremony. But at the checkpoint near Union Station, the Biden-Harris pin on her blazer was not enough to get her through security. So Reed resigned herself to waiting near the barricades, where a small group of Trump supporters had rallied. “What country are you from?” their leader, Ruben Israel, said through his loudspeaker at a group of young men of color. “Did you vote one time or two times?”

Reed, who is Black, decided to confront them, though it was hard for her to speak over Israel’s bullhorn. “Why do you need that to speak to people right in front of you?” she asked.

“Because I brought one. And you didn’t,” Israel replied.

It was a rare bit of discord in a city that fell silent as residents waited out the tense day at home, the usual downtown gridlock replaced with unmarked vans full of troops in uniform. To Reverend Beaman, who has been friends with the Biden family for three decades, the atmosphere felt so out of sync with the occasion that it only seemed fair to call a “do-over” of the Inauguration in happier times.

The idea occurred to him on Tuesday night, as he finished rehearsing his benediction on the steps of the Capitol and looked out over the empty expanse of the National Mall. Maybe in time for the Fourth of July, he says, President Biden could “invite America and the world back” for another celebration. “We can have the parades and the fireworks, the streets filled with people who are just happy to see this peaceful transfer of power.” In the meantime, the Reverend added, he’d keep that plan in his prayers. 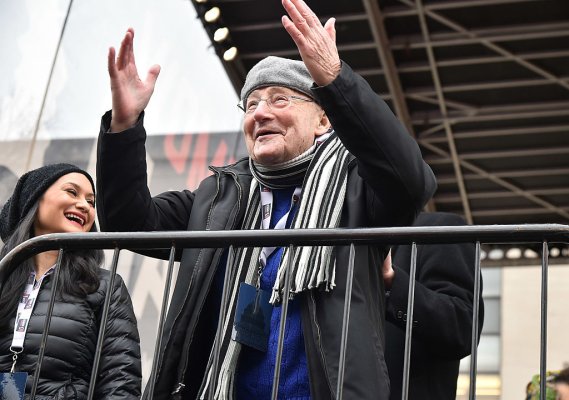 Charlie Brotman Talks to TIME About His 16th Inauguration
Next Up: Editor's Pick