93-Year-Old Announcer Charlie Brotman Just Served in His 16th Inauguration. Here's Why He's Still Honored to Do the Job

After not being invited to perform for former President Donald Trump’s inauguration in 2017, Charlie Brotman once again served on Wednesday as the “Inaugural Parade Announcer.” It marked his 16th time, for 11 different Presidents.

In 2017, Brotman was replaced by Steve Ray, a broadcast professional and supporter of President Trump. “It was a huge disappointment,” Brotman says. “I had been the only announcer for this parade.”

The Trump administration ended up honoring him with the title “Announcer Chairman Emeritus” and invited him to come to the parade. However, says, Brotman, “I declined. It hurt my feelings. I just did not feel comfortable.”

This year Brotman returned, at least electronically, to announce sections of Biden’s “Parade Across America,” with pre-recorded messages.

Brotman last spoke to TIME in 2009 for President Barack Obama’s first inauguration. Though some years have passed, he still finds a great deal of joy being involved in the ceremony and is delighted to return to mark another President’s swearing in.

Do you have a favorite of your 16 inauguration parades?

I’m a showbiz type guy. I’ll immediately go to Reagan and Kennedy. Half of Hollywood came to Washington. For an ordinary guy like me, under extraordinary circumstances, here I am rubbing shoulders with celebrities.

Do you have a memory of President Obama’s two inaugurations, the last two you did before President Biden’s?

I had a little discussion with President Obama. I commented to him that I was a little disappointed. I expected him to have celebrities, musicians, entertainers and athletes and he just had these young people. His feeling was that these young kids would remember this for the rest of their lives. I was proud of him for thinking of the youth of America.

Have you met all the Presidents whose parades you have hosted?

I don’t meet them on the day of the parade. I lead a double life. I was also a baseball announcer. Every time a President came to a game, I would get to meet him and take him into the locker room. I don’t know who gets the bigger kick out of it, the players or the Presidents.

Were there ever any mishaps at the inauguration parades?

I’m high up in the stands when I’m doing this. At that time, Washington had just gotten our new baseball team [the Washington Nationals]. At a certain time during the parade, President George W. Bush stopped right beneath me.

I feel that I’m there to inform and entertain so, I’m thinking “Boy, you better do something.” So I yelled out, “Mr. President I know you have a baseball team in Texas. We have a team here. I’d like to invite you to throw out the first ball on Opening Day.” He looked up and waved and gave a shrug of his shoulders, like “I don’t know.” I waved and he waved back.

Does you get paid for announcing the parade?

I’ve never taken any money for it. I would pay them to do it… That’s worth more than money. Could I use the money? Absolutely. But I’ve never charged for doing anything political. I think it’s an honor. 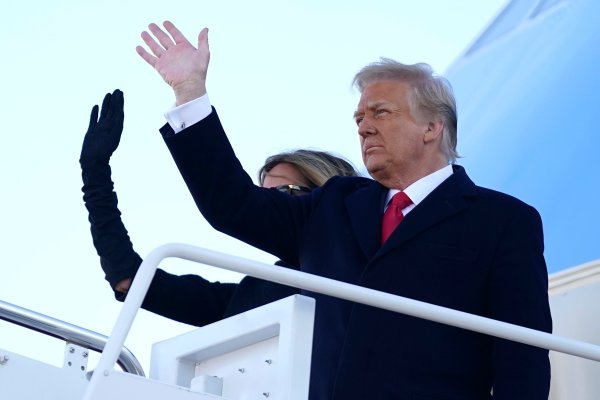 Donald Trump Leaves With a Whimper
Next Up: Editor's Pick