These Business Owners Made Their Feelings for Trump Clear, and So Did Their Customers

Jenny Cudd had no problem bragging online about “charging the Capitol” on January 6 and being with a group that broke into House Speaker Nancy Pelosi’s office and stole Pelosi’s gavel. In fact, Cudd, a former Midland, Texas, mayoral candidate and the owner of Becky’s Flowers, appeared giddy in the now-deleted videos posted from inside the Capitol as violence fueled by Donald Trump led to five deaths.

But those videos didn’t just lead to Cudd being quickly identified, arrested and charged with two misdemeanors. Cudd’s business has also taken a hit, especially online; the Yelp page for Becky’s Flowers is filled with 1-star reviews urging a boycott of the business (Yelp disabled posts for the business due to the increase in activity). In an interview with CBS7, Cudd said that she’s received multiple death threats at her shop since the riot but reiterated that she still believes it was “not wrong” for her to go inside the Capitol during the riots.

Across the country, small business owners who attended the pro-Trump event are facing backlash and in some cases boycotts as their images circulate online. Some of those who didn’t storm the Capitol but simply attended the event or were in Washington D.C. to support Trump are also facing fallout, a sign of a shift in consumer behavior. In an era of ideological polarization and economic hardship, people don’t just care about the products a business provides; they care about the politics behind the business, and thanks to social media, that’s easy to figure out.

“Firms are made up of people, and individuals want to buy from firms or use the product that can represent them,” Pinar Yildirim, an associate professor of marketing at the Wharton School of the University of Pennsylvania, tells TIME. “We want to buy from firms that share our values, that represent us, that seem to see a future for this country, for the world, or for ourselves, the way that we do.”

Even some of those who didn’t storm the Capitol but simply attended the event or were in Washington D.C. are also facing fallout. After Donald Rouse, Sr., a Louisiana businessman and retired CEO and co-owner of the grocery chain Rouse’s Markets, was spotted on social media at the rally, there were widespread calls online to boycott the stores bearing his name. Rouse later issued a statement saying he had left before the riots began and condemning the violence. In Chicago, Thien Ly, the general manager of the restaurant Tank Noodle, posted a photo of himself on a plane, as well as a plane ticket to Washington D.C., on social media, leading to a deluge of negative Yelp reviews, calls online to boycott the restaurant, and even a virtual protest. In an interview with NBC Chicago, Ly said that he and his family were in D.C. to show support for Trump but were not near the Capitol building; since the riots, they have received death threats, harassment and intimidation at the restaurant, he said.

And in Oklahoma, Marcum’s Nursery, a small, family-owned business with stores throughout the state, is being boycotted by some customers after its owner, Monty Marcum, posted pictures of himself at the pro-Trump rally on his personal Facebook account. On Yelp, where posts have also been disabled due to the uptick in activity, the business has received multiple low reviews following the riots. In one review that is among several now removed for violating Yelp’s terms of service, someone identifying himself as Chris S from Pontotoc, Okla., said he no longer would shop at the nursery: “I used to love Marcum’s. Then I found out Monte [sic] Marcum went to DC to participate in a seditious conspiracy against the United States.”

Marcum’s did not respond to requests for comment, but on Yelp, one of the business owners, who identified herself as Crystal B., answered a recent negative complaint on Yelp about Monty Marcum’s attendance by noting that “no one from our company entered or even attempted to enter the Capitol building” and that they “support the constitutional right of ALL Americans to peaceably assemble.”

For Lauren Lackey, a Norman, Okla. resident whose Facebook post urging friends not to shop at Marcum’s went viral with both boycott supporters and dissenters, the decision to shun Marcum’s is a way of peacefully expressing her values—something she sees as a foil to the violence at the Capitol.

Yildirim, the Wharton marketing professor, says shoppers taking action by choosing to shop at or boycott businesses due to their values is nothing new.

“It’s very much part of what consumers care about when they buy products,” she says. “Given that they realize that some firms are completely against their values, their ideology, their personality, they will take an action against them, whether they are large or small.”

But Yildirim says the boycotts in this moment are different from ones in the past for a few reasons. She points to an increase in the last two decades of consumers who care about how their consumption aligns with their political and social values; this, in turn, has spurred many businesses to be more openly political in an effort to reach customers who might align with their values. Coupled with the rise of social media for organizing and mobilizing, as well as the current pandemic, which has overwhelmingly affected the livelihoods of many small business owners, boycotts in this moment could have a considerable impact.

It’s certainly something that Lackey thinks could lead to substantive change, at least within her community.

“Just by not shopping, there is the way to be heard without being violent and aggressive,” she says. “Where you spend your money, especially in a town as small as this, it will be noticed.”

And that, Lackey hopes, will lead to changes in behavior. “There are people that have said that they have shopped at Marcum’s for decades that have said they will never shop there again. They will notice that. There’s now a possibility that they will reconsider their position or in participating in things of that nature.” 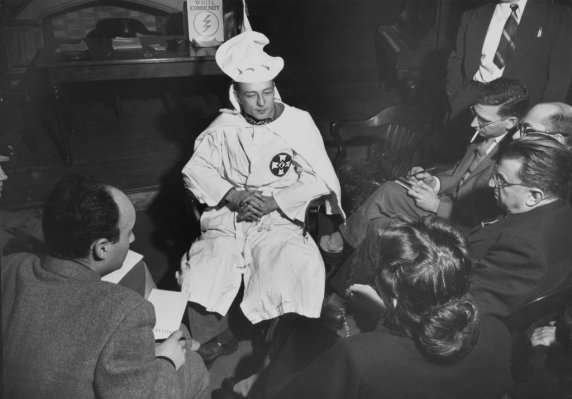