The U.S. Capitol Attacked Reminded Me of the 1979 US Embassy Seizure and What Happens When Extremism Wins

Demonstrators perched atop of the United States Embassy wall, burn an American flag, the fourth American flag to be burned since the students seized the embassy and more than 60 hostages Nov. 4th. demonstrators also burned an effigy of President Carter, Nov. 9th.
Bettmann Archive
Ideas
By Roya Hakakian
Hakakian is the author of several books, including the forthcoming A Beginner’s Guide to America for the Immigrant and the Curious (Knopf, 2021).

As the frenzied crowds climbed the walls of the U.S. Capitol on January 6, memories of another moment of national frenzy ran through my mind, those of November, 4, 1979. Then, too, I had stared disbelievingly into the television, watching the Students of the Imam Line climb the walls of the U.S. embassy in our capital, Tehran. “The past is never dead. It’s not even past,” says William Faulkner. Yet my past can overwhelm the present. Instructive, as all pasts often are, it can at times seem more relevant than it had been in its own time.

This is not to say that 1979 Iran is comparable with the 2021 United Sates. In every way, the two events have nothing in common, except in one: They were both acts of extremism produced by a confluence of similar forces. Both were products of a long and orchestrated campaign of lies and misinformation generated, in no small part, by the nation’s most trusted leaders. President Trump promised his supporters, “We’re going to win. We’re going to win so much. We’re going to win at trade, we’re going to win at the border. We’re going to win so much, you’re going to be so sick and tired of winning, you’re going to come to me and go ‘Please, please, we can’t win anymore.” In the same grandiose and hyperbolic vein, the Ayatollah, in his historic address upon his arrival in Iran from exile, promised to give to the poor not only free water, electricity, public transportation, and housing, but also he vowed to restore meaning to their lives, then spread all these blessings to the nations around the world, and finally, to the world to come. He told lies. The euphoric crowd cheered.

With every portrait of the rosy future he painted came a warning: The deposed king and his allies—internally and from abroad—were scheming to oust him, undo the revolution, and rob the nation of that utopia. Lest his audience be content or hopeful, he drove them feverish with all kinds of fears of enemies, real and perceived. Fevers, I have learned, are far more lethal when they afflict nations.

But lies alone did not lead to the seizure of the embassy. What was also essential for the hostage-takers to succeed was the presence of another group of extremists, an antithesis, which was more than a mere political rival with whom they had differences of opinions, but an existential one, one whose views and values were everything they were against. Each thought of itself to be the guardians of the nation and the true “revolutionaries.” In short, extremism begat extremism. By Nov. 4th, when the embassy fell into the hands of the radical disciples of Ayatollah Khomeini, it had already been seized nine months earlier.

This first occupation on February 14, known as the Valentine’s Day Open House, was done by a group of radical communists. Like their ultra-religious rivals, they shared a deep suspicion, if not hatred, for the United States. If only a few people heard of this incident, it is because the U.S. ambassador, William Sullivan, with the help of the members of the moderate provisional government, which had only come to power three days earlier, quickly and successfully ended the siege. This provisional government was made up of western-educated pragmatists who knew better than to allow a band of radicals, despite their great appeal and influence among the youth, take charge of the country.

But by November, the two radical forces—the communists on the extreme left and the religious zealots on the extreme right—were locked in a power struggle, and the moderate provisional government, besieged by so many crises, was already weakened. Each extreme needed to outperform the other by raising the stakes, outdoing the other by escalating and inventing new acts of extremism. Then in a final move, the religious students borrowed a page from the book of their communist rivals and scaled the walls of the U.S. embassy. This time, the Ayatollah who had begrudgingly worked with the moderates until then, chose to part with them by delivering a final blow. He further incited the furious crowds by hailing the takeover as a “second revolution” as important as the first. It was then that the provisional government, registering its deep objection to the takeover, was forced to resign. Within that fallen government were individuals who had been working to draft a secular constitution that reserved no place for a Supreme Leader, which 42 years later remains the greatest obstacle in the way of democracy.

It matters not how much the nation regrets or wishes to undo the events of 1979, Iran continues to suffer from its consequences still. In the power struggle between the two radical factions, the communists lost to the religious and were soon rounded up, imprisoned, tortured, executed, or forced into exile, while the international community was consumed by the news of the hostages at the seized embassy. More than four decades later, the religious students have gone on to form the new class of political elite. But few, even among the communists of the past, are without remorse. Whether they admit it or not, even the most diehard anti-Americans wonder where Iran would have been today if they had lent their support to the moderate voices of their time. That is why of all the many sentences that President-Elect Joe Biden spoke during his victory speech, the balmiest of all to me was this, “It’s time to put away the harsh rhetoric, lower the temperature, and see each other again.”

Every totalitarian leader rejoiced in the mayhem at the Capitol on January 6th. Iran’s president called it a proof of how fragile were the foundations of this democracy. What he and his counterparts cannot see is that the openness of America’s democratic system to tolerate multiplicity of thought and allow the expression of divergent opinions does indeed leave it vulnerable to many threats, including the possibility of lawful protest devolving into mob attack.But these are the inherent risks in a society that honors the rights of the individual—the sort of system whose response to peaceful dissenters is not with the barrel of a gun. Indeed, America opens itself to fragility by granting its citizens the right to air their grievances. But the very openness that can at times leave America vulnerable is the reason why so many people uproot themselves from their homelands and cross the oceans to come to America. They are also America’s unsung defenders, for those who have fled totalitarian regimes see the riches that the native born may take for granted, and cherish the principles upon which this country stands. 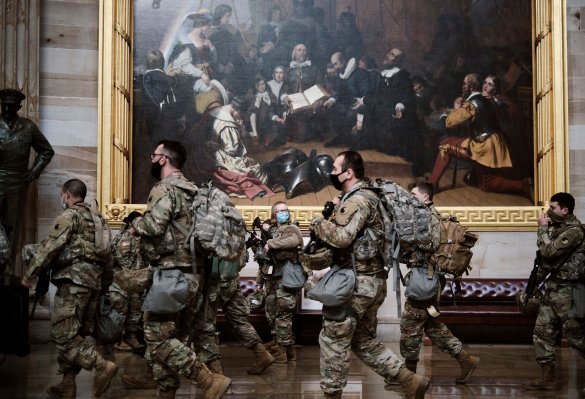 'A Real Nightmare.' State Capitols Are Racing to Catch Up to the Far-Right Threat
Next Up: Editor's Pick