Congress Remains as Divided as Ever After Deadly Capitol Attack

A metal detector stands in front of the House chamber after the vote on articles of impeachment at the Capitol in Washington, on Jan.13, 2020.
Gabriella Demczuk for TIME
By Lissandra Villa

Americans and their representatives in Congress might have found an opportunity to come together after a deadly mob stormed the U.S. Capitol on Jan. 6, threatening lives and upending the prospect for a peaceful transfer of power this week. But even while polling shows most Americans condemn the attack, the divided nation can’t agree on much else about it, including who should be held responsible.

Nor, it seems, can their representatives on Capitol Hill. As the new Congress kicks off with narrowly divided chambers, Republicans and Democrats are starkly divided on how to navigate the aftermath of the worst attack on the Capitol since the Burning of Washington in 1814. Democrats want to see Republicans held accountable on the safety of their workplace, from wearing masks to help prevent the spread of COVID-19 to getting answers on whether some Republican lawmakers were in league with the mob. Republicans have lashed out at additional security measures like metal detectors introduced in the House, and accused Democrats in bad faith of contributing to the ingrained partisanship with their heated rhetoric.

Congress was designed to represent America — and it is doing just that. Rather than rallying together in response to the attack, lawmakers are as deeply riven by recriminations as their constituents. Some members of the Republican party are choosing to cling to the alternate and baseless reality that the result of the presidential election was in question, rather than taking responsibility for enabling him for the last four years. Anyone who thought a crisis of this scale might tip a split legislature into banding together appears to have been wrong.

And while political scientists say a lot of this has to do with members posturing for their bases, it also has something to do with the lawmakers involved, and their personalities. “If they don’t get along now when the institution of Congress has been attacked, they’re not going to get along in the future,” says Randall Adkins, professor of Political Science at the University of Nebraska at Omaha.

As Trump prepares to leave the White House on Wednesday, there are signs some Republican leaders are now distancing themselves from the outgoing President. “The mob was fed lies. They were provoked by the President and other powerful people,” Senate Majority Leader Mitch McConnell said from the Senate floor on Tuesday, publicly acknowledging for the first time the role the President played in the attack. And while the House vote to impeach Trump for his role inciting the deadly riot was the most bipartisan impeachment vote in history, the number of House Republicans who voted with Democrats— 10— comes to less than 5% of the Republican House conference.

In recent days, some Democrats have accused their Republican colleagues of potentially aiding attackers. Rep. Mikie Sherrill said she saw Republican lawmakers giving “reconnaissance” tours the day before the attack, though she and other Democrats who asked for an investigation from the Sergeant at Arms and U.S. Capitol Police haven’t said who. Sen. Brian Schatz and Rep. Eric Swalwell criticized Republican Rep. Lauren Boebert for revealing on Twitter that the “Speaker has been removed from the chambers.” (Republican lawmakers also reportedly expressed concerns about Boebert’s actions.) New York Rep. Alexandria Ocasio-Cortez called on members like Sens. Ted Cruz and Josh Hawley to resign — and if they refused, to be expelled — for their role in sowing doubt over the presidential election results.

Democrats have also lashed out at some Republicans for refusing to wear masks while they waited out the attack on Jan. 6. “They don’t have the right to make life dangerous or make us vulnerable because of their insensitivity and arrogance,” says New Jersey Rep. Bonnie Watson Coleman, a 75-year-old cancer survivor. She was in the same secure location shown in the video published by Punchbowl News that shows a small group of Republican lawmakers turning down masks when Democratic Rep. Lisa Blunt Rochester was handing them out. (TIME reached out to the offices of the lawmakers who refused the masks in the video for comment. Only Rep. Marjorie Taylor Greene’s office responded, arguing that media coverage had unfairly targeted Republicans in regard to COVID-19 safety.)

“There are some (Republican lawmakers) I believe are irredeemable. They really are trying to overthrow the government, and I will not be working with them,” says Rep. Brad Schneider of Illinois, one of the lawmakers who locked down with his colleagues during the attack, including Republicans who refused to wear a mask. He later tested positive for COVID-19. “I’m not closing the door. But before I re-engage with some of these members who I believe have crossed over the line, there has to be a discussion.”

Republican House leadership has been largely quiet on these incidents. But some individual lawmakers have pushed back against Democrats’ accusations. In a statement to TIME regarding her tweet about Pelosi, Boebert said: “Some partisan officials and press have chosen to mischaracterize several of my tweets. Let me be clear: I do not support unlawful acts of violence and support the rule of law. Furthermore, my tweets came after both events referenced occurred and I never disclosed secure locations.”

As new safety precautions have been put in place inside the Capitol, including metal detectors for members entering the House chamber and a broadening of the mask mandate, Democrats have sought to enforce them by introducing fines for those who refuse to comply.

Several Republican members bristled at the suggestion that House members themselves were a threat, and stepped around them, according to NBC and HuffPost. “We now have to go through intense security measures, on top of the security we already go through. These new provisions include searches and being wanded like criminals,” tweeted Republican Rep. Debbie Lesko. “We now live in Pelosi’s communist America!”

Some Republicans say the security measures go too far, with Whip Steve Scalise, one of the highest-ranking Republicans in the House, telling CNN that the metal detectors in particular are “untenable.” Another Republican lawmaker referred to the magnetometers as “atrocities,” according to the Washington Post.

Republican Rep. Rodney Davis of Illinois, the ranking member of the Committee on House Administration, says he doesn’t believe there is a credible threat inside the Capitol and thinks stationing officers to oversee the metal detectors drains resources from the outside perimeter. He argues that installing them was political theater.

“The Republican party is the party that believes in law and order. We love our Capitol Police officers, we thank them every day,” says Davis, who was also present during the horrific 2017 shooting at a GOP baseball practice. “We will always comply with what our Capitol Police officers want.” He dismissed a follow-up question about GOP members sidestepping the metal detectors.

While the parties remain divided, they do at least share this: external threats to their safety. Rep. Lou Correa, a Democrat, and Sens. Mitt Romney and Lindsey Graham, who are Republicans, have all been harassed at airports in recent days. Rep. Peter Meijer of Michigan, one of ten Republicans who voted to impeach Trump last week for his role in inciting the mob, told MSNBC that he’s one of several lawmakers who has bought body armor as a precaution.

South Carolina Rep. Nancy Mace, who has spoken publicly about the role that conspiracy theorists played in the events of Jan. 6, says that while it’s important for Republicans to attend President-Elect Joe Biden’s inauguration this week, she personally has decided to skip it because she thinks it’s too risky.

Asked to describe the atmosphere on the Hill following the attack, Mace was quick to respond. “Divided,” she says. “Very divided.” 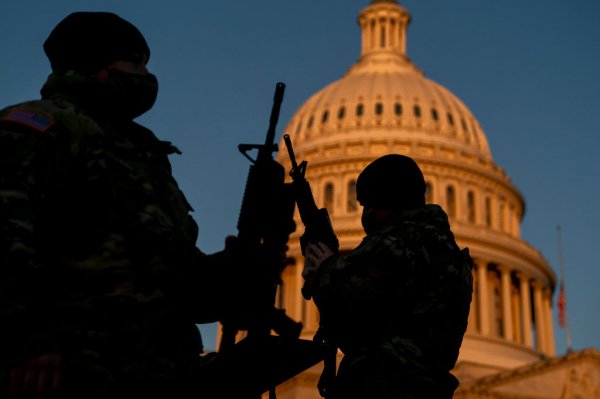 A Possible Threat From the Inside at Inauguration
Next Up: Editor's Pick