Melinda Gates: Why Women's Voices Must Be at the Center of Rebuilding After COVID-19

Ideas
By Melinda French Gates
French Gates is co-chair of the Bill & Melinda Gates Foundation, founder of Pivotal Ventures, and best-selling author of The Moment of Lift.

Right around this time last year, many of us at the Gates Foundation were starting to worry that the public health crisis emerging in Wuhan would soon be felt everywhere we work. With each passing week, it was becoming clearer that the new coronavirus was unlikely to be contained and a once-in-a-century pandemic was looming. While the world didn’t know much about COVID-19 yet, I was certain of one thing: a pandemic would lead to devastating setbacks for women everywhere.

This was an abrupt shift in my outlook. I’d spent 2019 telling anyone who would listen that 2020 was going to be a landmark year for gender equality. In April, I’d released my book The Moment of Lift: How Empowering Women Changes the World, which argues that even in a world where men usually set policy, it’s women who drive progress. I spent the rest of the year collaborating with partners on a major push to expand women’s power and influence in the United States. I wasn’t alone in believing we were on the cusp of a new era for women and girls.

But when the pandemic hit, my optimism began to buckle. Disease outbreaks always impact women disproportionately, and COVID-19 was unlikely to be the exception. Gender equality advocates began bracing for a catastrophic wave of shadow pandemics.

It didn’t take long for the bad news to start pouring in. Violence against women is reaching terrifying heights in country after country. The Malala Fund projects that an additional 20 million girls of secondary school age may never return to the classroom. In low- and middle-income countries, the strain on healthcare systems could lead to 113,000 additional maternal deaths. Here in the U.S., one in four women has already considered downshifting her career or leaving the workforce altogether because of new caregiving responsibilities at home. Meanwhile, all 140,000 of the jobs that disappeared in the U.S. last December belonged to women, most of them women of color.

More than numbers, however, I see faces in these figures. I picture the women in my book: a young bride named Selam, a mother named Meena, a farmer named Patricia. I imagine the others I’ve met through my work: aspiring entrepreneurs in Chicago who were struggling to find child care long before the pandemic began, young women of color counting on tech internships to break into the industry, teachers who have dedicated their careers to the students who are now falling behind because they can’t access online classes.

Even so, when I imagine these women, I do not imagine them as victims. Instead, I draw inspiration from their resolve. Women and girls have borne the brunt of the pandemic, but they have also led the fight against it.

This is true in hospitals and clinics around the globe, where the women who make up 70 percent of the world’s health workers are putting themselves at great personal risk to battle a deadly pathogen with whatever tools they have at hand. This is true in grocery stores and pharmacies and day care centers across the U.S., where essential workers—the majority of them women of color—are keeping shelves stocked, families supplied, and children safely playing and learning. This is true in New Zealand and Germany, where Prime Minister Jacinda Arden and Chancellor Angela Merkel are skillfully navigating their countries through crisis and giving effective leadership a woman’s face.

On Jan. 15 at 1 pm ET, watch TIME100 Talks’ conversation with Melinda Gates about COVID-19’s impact on gender equality—and solutions for the equitable distribution of a vaccine.

In the opening pages of The Moment of Lift , I write about that magical moment when a rocket ship tears away from the bonds of earth and ascends into the sky, an image I’ve carried with me since I was a child watching Apollo launches with my family. My whole life, I’ve wondered: What is it that takes us past the tipping point when the forces pushing us up overpower the forces pulling us down?

When it comes to gender equality, I’d once imagined the answer would be some shining moment of collective global aspiration—a call to action issued from the world stage, moving hearts, shifting perceptions, and leading to a new and more inclusive kind of policymaking. Now I think the breakthrough may be something else entirely. Maybe the thing that will finally succeed in cracking open the patterns of history is a global health crisis we never would have asked for.

COVID-19 has helped us see the failures of our social contract with new clarity, and all around the world, people are refusing to look away. A recent public opinion survey of 28 countries found that nine in ten people want the post-pandemic world to be more “sustainable and equitable.” Another survey reported that across 27 countries, a majority wants to see their economies reimagined to be more inclusive.

If global leaders respond accordingly, the crisis that disproportionately impacted women will be followed by a recovery that puts them at the center: The very financial systems that have excluded the poorest women will begin connecting them with the bank accounts they need to climb out of poverty. Policymakers in all corners of the globe will begin treating caregiving as essential infrastructure, making it possible for more women to engage in their economies and communities.

Governments, businesses, and organizations will begin including women’s voices at all levels of decision-making. And the women whose unsung, underpaid work finally has been recognized as essential will find new security and opportunity in the world that emerges from the other side.

I once hoped that 2020 would launch a new era for women and girls. Now, even in these darkest days, I see signs that it already has. 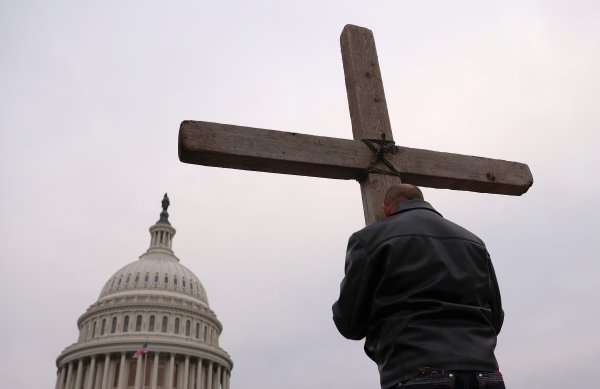 The History of Racism in White Christianity
Next Up: Editor's Pick