'A Real Nightmare.' State Capitols Are Racing to Catch Up to the Far-Right Threat

Armed National Guard troops gather in the rotunda of the Capitol in Washington on Jan. 13, 2021.
T.J. Kirkpatrick—The New York Times/Redux
By Vera Bergengruen

As a mob of President Donald Trump’s supporters besieged the U.S. Capitol in Washington on Jan. 6, a few dozen protestors chanting similar slogans were breaching the gate of the governor’s mansion in Olympia, Wash., almost 3,000 miles to the west. The small crowd in Olympia, some of them armed, planted a large red sign declaring “Trump Won 2020” and chanted “Whose house? Our house!” as law enforcement looked on.

In Washington, D.C., the attack on the Capitol ended with at least five people dead, including a Capitol police officer. In Washington state, authorities were luckier: Gov. Jay Inslee was away from the building in a “safe location,” and the demonstrators dispersed without a confrontation.

But as the U.S. braces for the next round of armed protests in the days leading up to Jan. 20 and beyond, the biggest threat posed by right-wing extremists is not in Washington, D.C., but in state capitals, according to interviews with more than a dozen current and former law-enforcement officials, local authorities and domestic-extremism experts.

It’s not just that there are 50 separate targets to defend, while the U.S. capital has been fortified with up to 20,000 National Guard troops. For years, local law-enforcement officials have largely failed to keep pace with the growing menace of right-wing violence and are ill-equipped to track the network of extremists operating in their jurisdictions, according to federal authorities and experts. While officials are scrambling to catch up now, under-resourced departments may struggle to discern which groups or individuals among this new motley coalition of pro-Trump forces pose a real threat.

“Bottom line, last Wednesday was a page-turning event for Capitol security forces across the country,” says Washington Patrol spokesman Chris Loftis. “We allowed 100 years of experience that no one had ever tried to breach the gate convince us that no one ever would try to breach the gate. We were wrong.”

On Jan. 11, the FBI sent a memo to law enforcement agencies warning about possible armed protests at all 50 state Capitols starting Jan. 16. In response, workers have boarded up the windows of the statehouse in Madison, Wis., and erected cement barriers around the Capitol building in Albany, N.Y. The police chief in Columbia, S.C. told residents to expect to see a “high visible police presence.” Michigan banned the open carry of guns inside its Capitol building in Lansing. “The Michigan Capitol is not safe,” state attorney general Dana Nessel warned on Jan. 12.

More than a dozen capital cities and police departments issued statements to TIME saying they have increased security and are in constant communication with federal, state and local partners to monitor events. But behind those statements, former officials say, are hundreds of officers playing catch-up in the race to determine which groups might pose a real danger and which are just empty chatter.

“If you have people showing up to state capitols with weapons, even if they don’t have the intent of launching an attack, the prospects for confusion or miscommunication are much higher,” says Colin Clarke, a terrorism expert at the Soufan Center, a nonpartisan group that tracks extremism. “That’s what I’m concerned about—Lansing, Mich., and Harrisburg, Penn., and Richmond, Va.,, and the Pacific Northwest in the coming days and weeks.”

Securing the buildings will be the easy part. The forces that converged to cause chaos in D.C. have been building across the country for years, from the “Unite the Right” rally in Charlottesville in 2017 to armed demonstrators who overcame police and stormed the Michigan and Idaho statehouses this summer. While it was Trump’s election loss that galvanized them to act on Jan. 6, their far-right, anti-government, white supremacist, and other causes won’t end with his time in the White House. Now, newly emboldened by what they view as a successful siege on Jan. 6, they have dispersed back into their communities, preparing for the next round of armed demonstrations, not just timed to President-elect Joe Biden’s inauguration but in the future.

“It has created a real nightmare here: many of the people committing violence at these rallies have been conditioned to believe that law enforcement will allow it to happen,” says Michael German, a former FBI special agent who is now with the Brennan Center for Justice. “They believe they’re the shock troops of the United States. Not just organized groups, but a lot of people you have taught that acting violently against their political enemies is okay. It’s hard to put that back into the bottle.”

Members of the Washington State Patrol and National Guard stand behind a temporary fence during a rally by a conservative group the day before the legislative session at the Washington State Capitol in Olympia, Wash., on Jan. 10, 2021.
Grant Hindsley—The New York Times/Rdux

In the days since the insurrection in D.C., demonstrations outside the capitol building in Olympia have mixed pro-Trump protestors with political activists opposing COVID-19 restrictions or the closure of the building to the public. Some participants were dressed in fatigues and carried semi-automatic rifles, handguns or tactical equipment. They were closely watched by National Guard troops in riot gear, standing behind layers of new security fencing surrounding the building.

The gathering threat has become apparent in multiple incidents elsewhere. On Jan. 8, Cody Levi Melby, a 39-year-old man angry about what he called an “illegal coup attempt,” fired five shots into the walls of a federal courthouse in Portland, Ore. Melby, who has shared QAnon conspiracies on his social media, had been arrested two days earlier after a “Stop the Steal” rally while trying to open several doors to get into the state capitol, but was released after posting bail.

Michael Chad Varrone, a 48-year-old Michigan man, was arrested on terrorism and other felony charges for calling in a bomb threat to the state Capitol in Lansing and leaving threatening messages for lawmakers. “I will personally come down there and take over that goddamn building at the Capitol,” Michael Chad Varrone said in one of the voicemails left on Dec. 12. In another, Varrone, who is white, threatened to kill a Black Democratic state representative and her family. Despite identifying himself—even spelling out his name—he was not arrested until Jan. 8.

On Jan. 12, a 45-year-old man in the Chicago suburbs was arrested for threatening to commit violence at Biden’s inauguration. In a voicemail left to an unidentified member of Congress, Louis Capriotti allegedly threatened that if people “think that Joe Biden is going to put his hand on the Bible and walk into that [expletive] White House on Jan. 20, they’re sadly [expletive] mistaken…We will surround the [expletive] White House and we will kill any [expletive] Democrat that steps on the [expletive] lawn.” Capriotti, who according to prosecutors had a history of leaving similar messages for members of Congress stretching back to 2017, issued that threat on Dec. 29. He was not arrested until two weeks later.

Such scenarios have played out all over the U.S. Faced with the prospect of more potential violence, local officials and law enforcement are struggling to determine the threat posed by crowds that mix regular political protestors with hardened extremists, brought together by Trump’s “Stop the Steal” campaign.

“In the past, there has been a lot of justified belief that these groups often sit around and talk and don’t really do anything,” says Amy Cooter, a sociologist at Vanderbilt University who has spent more than a decade tracking and studying militias. “But prior to the 6th, there were plenty of indications online that things could go in a very different direction. In my opinion, they vastly underestimated the potential for exactly what happened, in part because these were white protesters who had been framed in recent months as being pro-police.”

Members of the National Guard rest in a hallway of the Capitol building in Washington, on Jan. 13, 2021.
Sarah Silbiger—Bloomberg/Getty Images

The Jan. 6 rallies were organized in plain sight, with posts on public Internet forums and social media. Law enforcement failed to take this raw information seriously. In one case, an FBI office in Virginia sent their counterparts in D.C. an online post from the forum TheDonald.win, which warned “Congress needs to hear glass breaking, doors being kicked in,” according to a Washington Post report.

But in the week since, many of these groups have gone underground. Most decamped to more encrypted messaging apps after Parler, a social app popular with conservatives, went offline when Amazon pulled its hosting services. Others deleted their posts around the Jan. 6 events from online message boards, expressing concerns about being identified. “Stop the Steal” groups were removed from Facebook, and the company has said it will remove all content mentioning the slogan. All of this will further complicate state and local law-enforcement efforts to assess what’s coming in the short term, former officials tell TIME.

On the pro-Trump forums that served as a staging ground for the rallies, many expressed skepticism about statehouse protests after the FBI bulletin made national news. “WARNING: Do Not Attend Armed Protests At State Capitols Before Inauguration! Possible Sinister Plot Hatched By Radical Left To Take Away Gun Rights!” read one message reposted dozens of times and forwarded on Telegram channels. Some far-right militia groups, including in Washington state and Idaho, have canceled planned events.

Amid the escalating tension, state and local efforts are also being hampered by the consequences of the Trump Administration’s decision to gut federal programs and grants meant to combat far-right extremism, according to two former officials who worked on them. At the Department of Homeland Security, an Obama-era task force focused on domestic extremism was slowly dismantled over the course of the Trump Administration, which redirected resources to combat Islamist terrorism.

“This profound dip and reduction in staffing and funding happened at a time when the homegrown threat was expanding,” says Ryan Greer, a former DHS official who now works on extremism issues for the Anti-Defamation League. “The dismantling of that office over several years overlapped with the years of attacks in Pittsburgh and Poway and El Paso…tied to these movements we’ve seen commit violence over the last week.”

Despite the recent push to focus federal resources on domestic extremism, the lost time will have a significant impact for years to come. Elizabeth Neumann, who resigned from leading the DHS office that oversees responses to violent extremism last April, says the U.S. needs to force local officials and law enforcement to rethink how they assess credible threats that emerge in the form of political vitriol, conspiracy theorists and online extremists.

“This threat doesn’t go away with Trump,” Neumann says. “There’s still people radicalized through the experiences of the last year, through white supremacist movements…an active threat [of] a size that people can’t keep up with.” 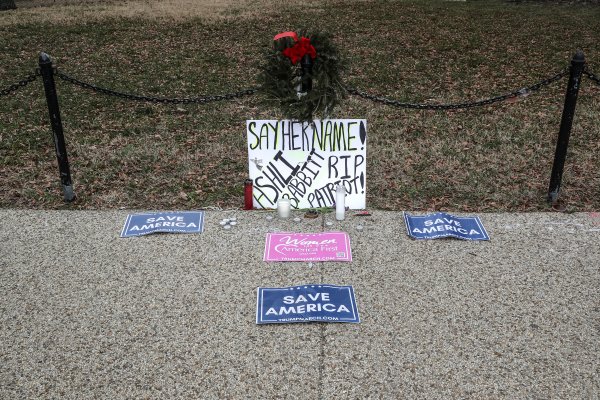 How Ashli Babbitt Is Being Turned Into a Far-Right Recruiting Tool
Next Up: Editor's Pick