When Gary Sampson tried to speak with his legal team on Jan. 5, he was so weak he dropped the phone, his attorney Madeline Cohen tells TIME.

Sampson, 61, has been incarcerated since 2003, sentenced to die after he pleaded guilty to carjacking resulting in death. He tested positive for COVID-19 in mid-December, Cohen says, becoming increasingly ill, frail and disoriented until he was eventually treated with Regeneron’s antibody cocktail. Sampson suffers from several health issues including stage 4 cirrhosis of the liver, she notes, and is still quite ill with COVID-19.

Citing conversations with her clients and fellow lawyers, Cohen says that at least 33 of the 47 men in the Special Confinement Unit (SCU), which houses federal death row prisoners at the Federal Correctional Complex in Terre Haute, Ind., have tested positive for COVID-19 since Dec. 16.

As of Jan. 11, 103 inmates and 5 staff members at Terre Haute USP, which contains the SCU, were positive for COVID-19, per the Bureau of Prisons (BOP). In a statement to TIME, the BOP also says that it has taken “swift and effective action” to combat COVID-19 and has “instituted a comprehensive management approach that includes screening, testing, appropriate treatment, prevention, education, and infection control measures.”

But despite the outbreak at FCC Terre Haute, the Department of Justice carried out the execution of Lisa Montgomery on early Jan. 13. The Trump administration has also scheduled two more executions for this week—Cory Johnson’s on Jan. 14 and Dustin Higgs’ on Jan. 15—just days before President-elect Joe Biden takes office. (Biden has pledged to eliminate the federal death penalty during his presidency.)

Johnson and Higgs each tested positive for COVID-19 in December; on Jan. 12 a federal court ruled that executing the men while they are still recovering from the virus violates their constitutional protections against cruel and unusual punishment, delaying their executions until March. The court ruled that the men demonstrated that COVID-19 had caused them “significant lung damage such that they will experience the effects of flash pulmonary edema… before the [lethal injection drug] has the opportunity to reach the brain,” which would create a “sensation of drowning akin to waterboarding.”

But a higher court overruled the stay Wednesday night, allowing both executions to move forward. Johnson is scheduled to be put to death at 6 p.m. Thursday, although a legal challenge over whether his execution should be delayed so he can have a hearing on evidence of his intellectual disability may still reach the Supreme Court.

Between 50 and 125 people travel to Terre Haute for an execution, per court documents, including a 40 person execution team that doesn’t quarantine upon arrival. Yet 10 executions took place during the second half of 2020 as COVID-19 ravaged the U.S. Advocates have pointed to two December executions—that of Brandon Bernard on Dec. 10 and Alfred Bourgeois and Dec. 11—as potential sources for the most recent outbreak at the prison.

On Jan. 7, federal judge Jane Magnus-Stinson ruled in a lawsuit brought on behalf of people incarcerated at FCC Terre Haute that upcoming executions can only take place if the BOP imposes specific preventive measures to stem the spread of COVID-19, writing that “there is compelling circumstantial evidence that the [Department of Justice is] knowingly disregarding a risk to inmates’ health if they proceed with the January executions in the same manner as the earlier executions.”

According to Magnus-Stinson’s ruling, between Dec. 8 and Jan. 7, 657 inmates and 70 staff members tested positive for the virus.

The BOP had “failed” to enforce mask wearing at previous executions, “chosen not to utilize rapid testing of staff and visitors who enter prison grounds” and did not properly conduct contact tracing after a BOP staff member involved in the executions tested positive,” she wrote. “The failure was not by accident but by design,” she added.

(When asked for comment on Judge Mangus-Stinson’s ruling, BOP said that it does “not comment on pending litigation or matters subject to legal proceedings.”)

In order to carry out executions this week, Magnus-Stinson has said the Trump administration must: enforce mask wearing for all staff participating in the executions, maintain contact logs for all staff members who come into close contact with another person during the execution process, require those staff members to tested negative with daily rapid tests for 14 days after close contact and conduct contact tracing for any staff member who tests positive during those 14 days.

She also ruled on Jan. 11 that the government must file a sworn affidavit or declaration “attesting that they have complied” with her requirements within 15 days of each execution.

“The steps [Judge Magnus-Stinson] has prescribed with this injunction are important and common sense steps, but they are not enough,” says Cassandra Stubbs, the director of the capital punishment project at the American Civil Liberties Union (ACLU), in a statement. “The federal government’s reckless push to execute an unprecedented number of people during this pandemic has inexcusably spread serious illness and death. It is well past time to say enough. The executions… should not be allowed to move forward.”

Cohen tells TIME that another one of her clients on federal death row, 45-year-old Norris Holder, contracted COVID-19 in late December but was given “very little treatment” besides periodic temperature and blood oxygen level checks.

In its statement, the BOP said that, “all inmates who are positive for COVID-19 or symptomatic are isolated and provided medical care in accordance with CDC guidance. Symptomatic inmates whose condition rises to the level of acute medical care will be transferred to a hospital setting; either at a local hospital, or at an institution’s hospital care unit, if they have one.”

Recent executions have “absolutely” been super spreader events, Cohen says. “The government [is putting] staff and prisoners at risk by going forward with these in the middle of an outbreak on the unit,” she tells TIME. “It’s outrageous.” 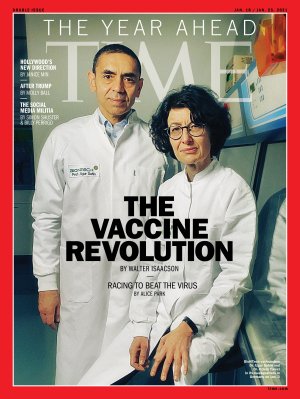 How mRNA Tech Gave Us the 1st COVID-19 Vaccines
Next Up: Editor's Pick