Many who took part in the rampage at the Capitol came equipped with powerful symbols emblazoned on flags, banners and t-shirts.

TIME analyzed videos and photographs shared on social media after January 6, and found that in addition to Confederate flags, the mob paraded with a host of hate symbols, white supremacist banners and QAnon shirts as they descended on the nation’s capital.

“I think it’s important to realize that there is essentially developing a new form of extremism, sort of a nascent extremist movement of pro-Trump extremists,” says Mark Pitcavage, a Senior Research Fellow at the Anti-Defamation League, who helped TIME review footage. “But at this point, one can’t just simply say there are mainstream Trump supporters and then there are these extremists, white supremacists or whatever, because some of those Trump supporters are no longer mainstream, they have become an extreme movement of themselves.”

Michael Hayden, an investigator at the Southern Poverty Law Center, which tracks militia and far-right extremist activity says that the events of Jan. 6 illustrated how the “soft barriers” separating support for Trump with support for conspiracy theories or hate groups had collapsed.

“The most salient thing for me,” he says, “is the degree to which your bread-and-butter GOP supporter, who fills out rallies and events, seem to be intermingling with extreme far-right factions: accelerationists, neo-Nazis, white nationalists, people who believe there is no political solution at all.” 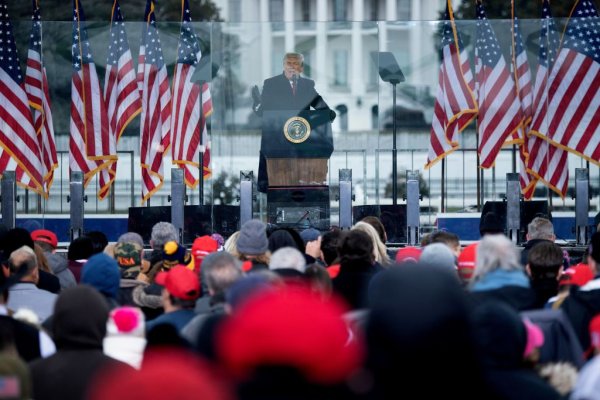 How the Senate Could Ban Donald Trump From Running in 2024
Next Up: Editor's Pick