Bakery owner Tim Kortuem decorates a cake in the shape of a vaccination syringe and with the slogan '2021 Bye Bye Corona' at Schuerener Backparadies bakery in Dortmund, western Germany, during a partial lockdown to curb the spread of the ongoing novel coronavirus (Covid-19) pandemic. - Germany on January 5, 2021 prolonged and toughened its partial lockdown until January 31. (Photo by Ina FASSBENDER / AFP) (Photo by INA FASSBENDER/AFP via Getty Images)
AFP via Getty Images
Ideas
By Ian Bremmer
Bremmer is a foreign affairs columnist and editor-at-large at TIME. He is the president of Eurasia Group, a political-risk consultancy, and GZERO Media, a company dedicated to providing intelligent and engaging coverage of international affairs. He teaches applied geopolitics at Columbia University’s School of International and Public Affairs and his most recent book is The Power of Crisis

2021 opens in the middle of the greatest crisis of our lifetimes. The healthcare response to the pandemic defined 2020. The economic response to its lasting damage will define 2021.

A world in crisis will miss the leadership and cooperation of an engaged and well-functioning superpower. When the world’s most powerful country is as divided as the United States is now, the G-Zero geopolitical recession is sure to deepen. That’s why we begin this year’s report with the problem of political legitimacy in America. These are Eurasia Group’s Top 10 risks for 2021.

Following a 2016 Trump victory that many Democrats believe Russia helped him win, Joe Biden’s term opens the era of the asterisk presidency, a time when the Oval Office occupant is seen as illegitimate by roughly one third of the country—and by some of the lawmakers that election skeptics send to Congress. Most of the risk here is domestic, with President-elect Biden the weakest executive to take office since Jimmy Carter in 1976. But the consequences of extreme polarization for democratic legitimacy extend well beyond US borders. Beyond a shared desire to contain China, Republicans and Democrats will disagree sharply—with each other and among themselves—over the objectives of U.S. foreign policy. In addition, the size of Trump’s base, and the broadening of that base to include more minority voters, leaves allies and potential partners wondering whether the next “America First” president and foreign policy are just four years away.

In 2021, the lingering symptoms of COVID-19 will threaten not just lives but political stability and the global economy. Countries around the world will struggle to meet ambitious vaccination timelines, and the pandemic will leave a legacy of high debt, displaced workers, growing inequality and lost trust. The bumpy vaccine rollout and economic scar tissue of the pandemic will stoke anti-incumbent anger and public unrest in many countries. Some emerging markets will experience tightening liquidity conditions this year. With inflation and borrowing costs rising, they’ll have much less room than the U.S. and Europe to cushion COVID’s economic blow.

Climate policy is becoming a higher national priority…and an arena of global competition. Across a range of clean technologies, China’s longstanding industrial policy approach will face an aggressive counteroffensive from Washington. Some parts of the clean energy supply chain will experience bifurcation pressures like those seen in 5G. The push for net-zero emissions targets will create enormous opportunities for private capital, especially the growing pool of Environmental, Social and Governance (ESG) dollars and euros, but winners and losers will be determined as often by political factors as by market forces.

A shared desire in Washington and Beijing for stability in U.S.-China relations will ease headline tensions, but U.S. coordination of China competition together with allies, along with vaccine diplomacy/nationalism and dueling climate tech strategies will combine with longstanding frictions in other areas to further complicate their rivalry. Disagreements over trade, Hong Kong. Taiwan, and the South China Sea will carry over into 2021. Collectively, these points of dispute will boost the risk of miscalculation and escalation toward crisis.

A slowdown to the free flow of sensitive data across borders will raise costs for companies and disrupt popular apps and internet business models. This risk begins with the US and China, but doesn’t end there. Even as the data-driven 5G and AI revolutions gain steam, other governments concerned about who is accessing their citizens’ data – and how – will erode the foundation of the open global internet. Business models for innovative tech sectors will suffer. App bans and other issues will hamper global cooperation on public health and climate challenges.

There’s no single factor that raises the risk of a major disaster in cyberspace in 2021. The digital realm, where any computer or smartphone can become an entry point for hackers, and nation states and criminals act with relative impunity, is too unpredictable for that. Instead, a combination of low-probability but high-impact risks and an increased threat surface area amid the acceleration of digitalization will make 2021 the year that cyber conflict creates unprecedented technological and geopolitical risk in cyberspace.

Economic setbacks in 2021 and Turkey’s poor COVID-19 response will leave President Erdogan struggling to win back voters disillusioned with his two-decade rule. These dynamics will stoke social tensions, prompt a crackdown against the opposition, and encourage Erdogan to launch more foreign-policy adventures to fuel nationalism and distract his supporters. And this year, Turkey’s president won’t have international friends to shield him from the consequences.

The Middle East is the biggest regional loser from coronavirus. Energy-producing countries in the Middle East and North Africa faced a collapse in global energy demand in 2020 that left governments from Algeria to Iran with less cash flowing into their coffers—even as the pandemic sickened citizens and weakened economies. 2021 will be worse, with energy prices remaining low. Many of these governments will cut spending, damaging vulnerable private sectors and fueling unemployment. Reforms will slow, and protests will grow.

Angela Merkel’s departure later this year after 15 years as Chancellor will drive the continent’s top risk. Europe faces an economic hangover from intensified lockdown restrictions in several countries, and Merkel won’t be there to encourage flexibility in the multilateral response. Any economic setback could thus threaten Europe’s fragile recovery, and create the conditions for European populism to awaken from its hibernation. Without Merkel to serve as a strong negotiator, diplomatic efforts to resolve energy and territorial disputes in the Eastern Mediterranean will also struggle. The E.U. position will become more hawkish as France pushes more member states to get tough with Turkey, raising tensions.

After the Middle East, Latin America is the region of the world most negatively impacted by coronavirus. Governments in Latin America face intensified versions of the formidable political, social, and economic problems they were confronting before the pandemic. In most of the region, there will be no large-scale vaccinations until late in the year, and countries are poorly positioned to deal with another COVID wave before then. Political and economic pressures will intensify as Argentina and Mexico hold legislative elections in 2021, and voters in Chile, Ecuador, and Peru vote for president.

U.S. lawmakers won’t declare war on the tech companies helping to restore post-pandemic growth, due to an inability to agree on their grievances and regulatory approach.

Ties between the U.S. and Iran will be neither as productive nor destructive as many fear (and no, President Trump isn’t going to war with Iran before he leaves office). 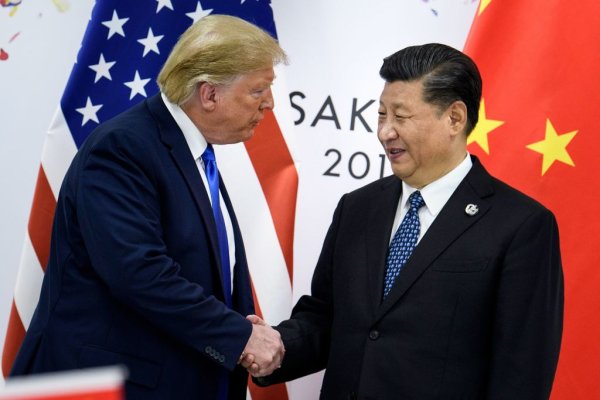 The U.S. and China Are Not Heading Towards a New Cold War
Next Up: Editor's Pick