No charges were filed against the police officer who shot Jacob Blake, an incident of police violence against a Black man caught on video last August which, amid a larger reckoning on police conduct and racial justice, garnered national attention.

Kenosha District Attorney Michael Gravely made the announcement during a Tuesday press conference.

“It is my decision now that no Kenosha law enforcement officer will be charged with any criminal offense based on the facts and laws,” Gravely said, while acknowledging video of Blake’s shooting is “deeply disturbing.”

After the announcement, members of Blake’s family as well as an attorney, B’lvory LaMarr, held their own press conference. Blake’s uncle, Justin Blake, called the decision a “grave injustice”.

“This is going to impact this city, this state and the nation for many years to come unless the people rise up and do what they’re supposed to do. It’s unjust. We’re going to unite our people from coast to coast until we get justice. We’re not backing down. We’ve got work to do,” Justin Blake said at the press conference.

Blake, 29, was shot by officer Rusten Sheskey on Aug. 23 after an altercation between Blake and multiple officers. Before he was shot, Blake had been wrestled to the ground by police officers who had allegedly been called over a domestic incident involving Blake and his girlfriend. (Civil Rights attorney Benjamin Crump, who is representing the Blake family, previously said that Blake was breaking up a fight when the police were called.) He was also tased.

As depicted in cellphone footage shot by neighbors, Blake then walked away from the officers towards his car. He opened its front door and appeared to lean inside before being shot several times in the back by Sheskey. Three of his sons were in the car when he was shot. Blake survived but is now paralyzed.

“It’s really evidence about the perspective of Officer Sheskey at each moment, and what would a reasonable officer do,” Gravely continued, citing an admission allegedly made by Blake that he had a knife in his car as justification for Sheskey’s conduct.

“This decision—and the prosecutor’s reliance on tropes of superhuman Black men to justify police fears—should not come as a surprise to anyone who has been paying attention to police’s role in Black communities since they began as slave patrols,” Carl Takei, Senior Staff Attorney with the ACLU’s Trone Center for Justice and Equality, said in a statement provided to TIME. “All of this emphasizes how the criminal legal system, from police to prosecutors, have functioned to oppress and harm Black people. While accountability for the officer might have led to some semblance of justice, real justice would have been Jacob Blake never being shot in the first place.”

LaMarr said that the family will likely pursue a civil case against the department. There is also a federal civil rights investigation into the shooting underway.

On Jan. 4, Wisconsin Governor Tony Evers said that he was sending 500 National Guard troops to Kenosha at the request of local officials. The Kenosha Common Council also allowed Mayor John Anataramian to prepare for city-wide curfews following the DA’s decision.

That same day, Blake’s father, Jacob Blake Sr., led a protest through Kenosha, calling for Sheskey to be held accountable. “[Sheskey] tried to kill my son and could have killed my grandchildren,” Jacob Blake Sr. said during a news conference. “He shot him seven times in his back unjustifiably.”

Blake’s shooting came just three months after the killing of George Floyd by a Minneapolis police officer, and led to days of unrest in Kenosha. On Aug. 25, during a night of protests, Kyle Rittenhouse, a then 17-year-old who had come to Kenosha allegedly to assist law enforcement and protect local businesses, fatally shot two people and wounded a third.

Just hours before Gravely announced his decision, Rittenhouse entered a not guilty plea to charges including two counts of homicide during a court date, arguing that he had acted in self-defense.

Protesters peacefully took to the streets on Tuesday night across the city, in keeping with the Blake family’s wishes.

“We, the Blake family, are asking this city, this county, this state and this nation to rise up…non-violently,” Justin Blake said. 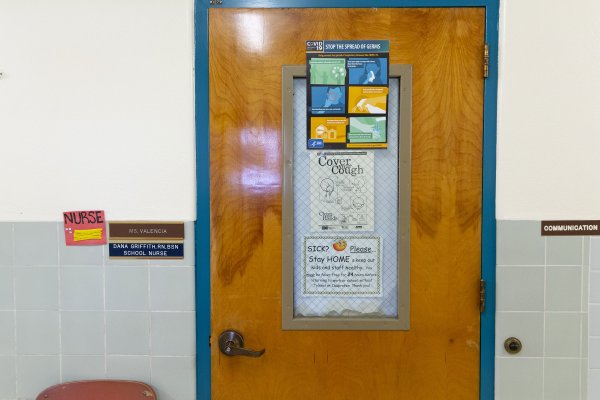