Why the Arab Spring Failed—And Why It May Yet Succeed

CAIRO, EGYPT - NOVEMBER 23: Demonstrators hide after street battles with Egyptian security forces on in smaller alleyways off Mohamed Mahmoud in downtown Cairo on November 23, 2011 in Cairo, Egypt.
Photo by Kim Badawi/Getty Images
Ideas
By Paul Salem
Salem is president of The Middle East Institute. He is the author and editor of a number of books and reports including, most recently, Escaping the Conflict Trap: Toward Ending Civil Wars in the Middle East (ed. with Ross Harrison, MEI 2019).

December 17, 2020, marked ten years since Mohammad Bouazizi immolated himself in a small town in Tunisia. His death on January 4, 2011, unleashed a chain of events that led to national protests and uprisings first in Tunisia, then in Libya, Egypt, Syria, Yemen, and Bahrain. Over the past two years similar protests have erupted in Sudan, Algeria, Iraq, and Lebanon. As the pandemic hopefully begins to ebb in 2021, we can expect new ones to break out again.

Lenin said “decades go by and nothing happens; then days go by, and decades happen.” The uprisings of 2010 and 2011—and those of 2019 and 2020—expressed a seething frustration with decades-old socio-economic systems. In many Arab countries, these systems failed to provide sufficient public goods or equity. Political systems privileged elites who monopolized wealth and used the instruments of the state not to promote the public good, but to repress and oppress the citizenry. The breaking of the wall of fear and the piercing of decades of stagnation by populations that suddenly realized their political power unleashed a dreamscape of possibility.

I lived through those early heady days of the Arab uprisings. I was in Beirut working alongside activist colleagues from many Arab countries. Wordsworth’s words about the French Revolution rang true: “Bliss it was in that dawn to be alive.”

I observed then that revolution is not transition. The French Revolution itself descended into violence and resurgent authoritarianism. The revolutions through much of Europe in 1848 flashed a glimmer of democratic hope before being summarily extinguished by the powers that were. It took Europe—at least Western Europe—another century to fulfill the promise of those uprisings.

In the Arab world also, the dynamic of public empowerment and its struggle with entrenched elites and exclusionary governance systems is to be measured in decades, not years. But it is a powerful force nonetheless. In the first clearing of its throat a decade ago, it toppled four entrenched leaders and profoundly shook two others.

But the hoped-for transition from Arab uprising to Arab Spring has not yet materialized. Only in Tunisia—and one might add Sudan—has a form of democratic transition taken hold. In two countries—Egypt and Bahrain—the state apparatus, with external support, forced a counterrevolution. In three others—Libya, Syria and Yemen—neither transition nor effective counterrevolution prevailed, and they descended into civil war and state failure and collapse.

What this shows is that the drivers of uprisings are different than those of democratic transition. The former are driven by the persistent socio-economic and political dysfunctions widespread in the Arab world; democratic transitions, meanwhile, require particular enabling conditions. These include a national pro-democracy movement that can not only organize mass protests but also win elections; a set of state institutions, at least some of which (the army in most cases) would enable such a transition; and a regional environment that is supportive, or at least accommodating. So far, this has rarely been the case.

In many Arab uprisings, the youth movements that spearheaded the revolutions lost out in subsequent elections to decades-older Islamist movements. Only in Tunisia, Yemen and Sudan—and 2011 Egypt—did the military enable a transition. As for the regional environment, the major Middle Eastern states moved quickly either to oppose the specter of democratization or to support their own ideological or sectarian clients.

But Arab uprisings will continue to recur. The socio-economic conditions at the root of the uprisings a decade ago are now more acute, not least because of the pandemic. And politically, tensions of entrenched elites trying to suppress public voice and participation will generate recurring crises.

Rulers in the region have been eager to emphasize that the harvest of the ‘so-called’ Arab Spring has been bitter. Indeed, the three ongoing civil wars in Libya, Syria and Yemen are bitter enough. And they have taken heart from the rise of authoritarian global powers such as China and Russia. They seek to assert that rapid development and hyper modernization can be achieved—indeed, can be better achieved—while restricting human rights, public voice, and civic life. And they were buttressed by the rise of Donald Trump, who openly attacked the foundations of a democratic, civic, rules-based society. They have also eagerly looked to digital technologies—including social media and facial recognition—to find a 21st century way to win the battle of empowerment between them and their own populations.

This struggle for power will likely continue. A renewed Arab Spring is still far away—maybe years, maybe decades. Different societies will and should take different routes. But the idea that extreme authoritarianism can be rebuilt as a digitally enhanced stable political system is a dangerous delusion. An increasingly urbanized, empowered, and active populace is one of the ineluctable mega trends of the 21st century. The sooner elites recognize that this is a force for good, to be engaged and harnessed, the better; those systems that consistently deny and suppress it will put their societies and themselves at risk.

A Biden Administration will hopefully end the encouragement of authoritarianism and should project its commitment to America’s foundational values of human rights, rule of law, and accountable government. But the Arab world of today is evolving according to its own logic, as it should. The struggle for more free, inclusive, and accountable political systems will be one of the main forces shaping the Middle East of the 21st century. Like all seasons, the Arab Spring will return again. 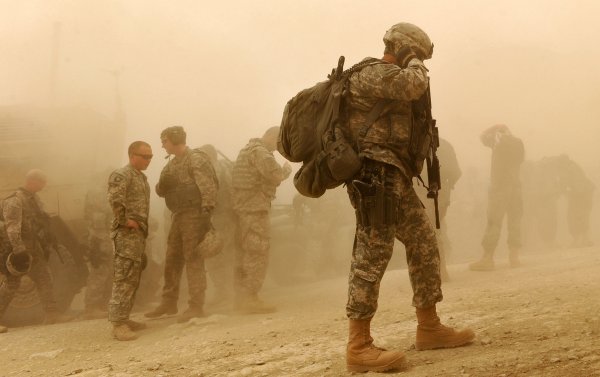 Here’s How We Could End War in Afghanistan
Next Up: Editor's Pick