Why All Eyes in Washington Are on Georgia’s Senate Races

Tomorrow, voters in Georgia will decide if twin incumbent Republicans will keep their jobs in the Senate. If Democrats can win both seats, their party will have a majority in the Senate and incoming President-elect Joe Biden will inherit a much friendlier landscape to govern come Jan. 20. If Republicans retain even one of the two seats, Senate Majority Leader Mitch McConnell will keep his gavel — and President Donald Trump will inevitably claim that he saved the party and still has the juice to mount a comeback in 2024.

Trump lost Georgia in his own race by just under 12,000 votes. So far, he appears incapable of accepting that reality. In audio obtained by The Washington Post’s Amy Gardner, Trump is heard cajoling and threatening Georgia’s top elections officials over the weekend, demanding they come up with enough votes to give him the win he believes he earned. “Fellas, I need 11,000 votes. Give me a break,” Trump says in what sounds like a shakedown from a bad mob boss in a B-movie.

Trump is heading back to the state this afternoon for a rally for two reasons. One, to get in a last shot at fellow Republicans who say the President simply didn’t have enough votes to win. Nothing animates Trump like a grievance, regardless of fact or party. And two, to rally behind the Republican candidates who have embraced All Things MAGA in an election the President has repeatedly told supporters is rigged.

Neither will motivate middle-of-the-road voters in the suburbs who may have begrudgingly voted for Trump in November but are now weary of his antics.

And that’s the rub for Republicans. The GOP has historically prevailed when Georgia races go to runoffs. The system, a vestige of the Jim Crow era, explicitly serves Republican advantages because Black voters have historically not shown up for the second round of balloting for a variety of reasons. But Trump is simultaneously asserting the first round of balloting was marred by cheating, the second round probably will be just as bad, and that Perdue and Loeffler need support from the voters he is urging to be skeptical. It’s a contradiction not unusual in the Trump era, but one that is decidedly unhelpful for the GOP in that era’s final gasps.

Democrats have readily seized on this fracture in the Republican Party. If ever there were gloves here, it seems they’re now missing in action. While Biden kept his campaign aspirational and upbeat, the Democratic machine on the ground in Georgia has joined the Republicans for the gut punches. Candidates Jon Ossoff and Raphael Warnock have repeatedly cast their rivals as Trump henchmen, marching with a man who in 15 days will be ushered from office. Democratic visitors have done the same, including Vice President-elect Kamala Harris during a stop on Sunday, who hammered Trump for his phone call a day earlier to Atlanta and urged voters to give Democrats a repeat of what they saw in November. “When we vote, we win,” she said in Savannah. Biden is due to arrive this afternoon.

The Republicans candidates, for their part, have done little to shield themselves from the perception that they’re Trumpistas. During the final run-up to the end of voting on Tuesday, the headlines coming from Washington have been about Trump’s fight with Georgia Republicans, his demands for $2,000 stimulus checks from Congress — branded as “socialism” by McConnell at the other end of Pennsylvania Avenue — and his support for Republican lawmakers looking for tomfoolery when Congress certifies the electoral college’s vote on Wednesday. In terms of tone, Perdue and Loeffler have stuck by Trump, looking to stay in his good graces.

Their tactic may be the new model for the GOP, for at least the next two years, should either or both Republicans win. Deference to Trump and his burn-it-down politics may be what it takes to placate a man who, even in loss, won 74 million votes in November and brought many newcomers into democracy. The results may be messy, but maybe this is a more accurate representation of this country than many realized.

Or, if Democrats pull off the inside-straight two-pronged win, an altogether different path may lie ahead for Republicans. With the Trump era is over, Perdue and Loeffler could be its latest collateral damage. More may fall if they aren’t cautious. 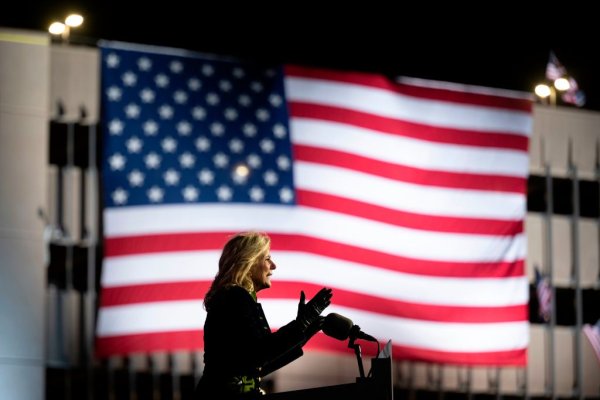 Why 'Dr. Biden' Became a Flashpoint
Next Up: Editor's Pick