The COVID-19 vaccine developed by the University of Oxford and AstraZeneca wasn’t the first to be OK’d by regulators in the U.K.—health officials authorized the Pfizer-BioNTech jab nearly four weeks earlier. And it’s not the most effective—Stage 3 clinical trials suggest it prevents COVID-19 symptoms about 70% of the time vs. about 95% for the Pfizer vaccine and a similar one from Moderna (which is authorized in the U.S., but not the U.K.).

But the greenlight from the British Medicines and Healthcare Products Regulatory Agency on Dec. 30—followed by emergency authorization by India on Sunday—could be a big step toward bringing the COVID-19 pandemic under control worldwide. On Monday, the U.K. began administering the first doses.

It’s especially big news for the developing world because it’s cheaper and easier to handle and store. Countries from India to Brazil to South Africa have made big bets on the shot from the celebrated British university and the U.K.-Swedish drugmaker. The U.K. was the first country to allow use of the vaccine. Trials are ongoing in the U.S. and in multiple other countries.

Questions and major hurdles remain before it will be available in the U.S. and continental Europe, where it has yet to receive regulatory approval.

However, if the vaccine is authorized for use and rolled out widely across the world, “that’s really the beginning of the end of the pandemic,” says Ben Cowling, an infectious disease epidemiologist at the University of Hong Kong.

Advantages of the Oxford-AstraZeneca vaccine

The first thing to know about the Oxford-AstraZeneca jab is that it’s cheap. AstraZeneca has promised it will not make a profit on the vaccine during the pandemic. As a result, it costs $3 to $4 per dose around the world. Compare that to $25 to $37 a dose for the vaccine developed by Moderna and about $20 a dose for Pfizer’s jab, according to figures reported in Europe.

“Approval of this vaccine is a turning point for the pandemic because it has been deliberately developed to have global impact that includes people living in the most fragile and poorest regions of the world,” said Helen Fletcher, a professor of immunology at the London School of Hygiene & Tropical Medicine.

Second, it’s easier to transport and store. Unlike Pfizer’s vaccine, which must be stored in specialized freezers at -70°C (-94°F), the Oxford-AstraZeneca shot requires only standard refrigeration and will remain viable for up to six months. (Morderna’s vaccine can be kept at normal freezer temperatures and stored in refrigeration for up to 30 days once thawed.)

Additionally—there will be a lot more of it available. AstraZeneca and Oxford have worked with manufacturers across the world to produce millions of doses already, and the company says it hopes to make 3 billion more in 2021. With the current two-dose regimen, that’s enough to vaccine nearly 20% of the world’s population.

The Serum Institute of India, which was contracted to make COVID-19 vaccine for the developing world, has already manufactured up to 50 million doses and says it can make 100 million a month by March.

Pfizer, one of the world’s largest drug companies, has set a target of delivering 1.3 billion doses for 2021. Moderna, an upstart pharmaceutical company, says it hopes to produce between 500 million and 1 billion doses. However, rich countries have already claimed much of the expected supply of the Pfizer and Moderna vaccine. “Those vaccines are already committed, so they are not available for most middle income and low income countries,” says Dr. Chandrakant Lahariya, a Delhi-based epidemiologist and author of a book on India’s COVID-19 fight.

The Oxford-AstraZeneca vaccine, on the other hand, makes up the bulk of the 2 billion vaccine doses secured by COVAX, a consortium of 190 world governments formed to help ensure COVID-19 vaccines were distributed fairly around the world—including to developing countries.

However, Serum Institute CEO Adar Poonawalla told the Associated Press on Sunday that the Indian government’s emergency authorization of the vaccine was contingent on the shot only being sold inside the country for several months. This likely means developing many countries won’t get access to the vaccine until April or May.

Indian officials wanted to ensure they could vaccinate the most vulnerable of the country’s nearly 1.4 billion people before Serum Institute, the world’s largest vaccine manufacturer, began sending doses to other nations, Poonawalla said. India has recorded 10.3 million COVID-19 cases, the second-highest tally worldwide—behind the U.S.

How is the Oxford-AstraZeneca vaccine different?

The Oxford-AstraZeneca uses different technology from the Pfizer and Moderna vaccines that are approved for use in the U.S.

While those two vaccines use the mRNA genetic code of the coronavirus to train the body’s defenses, the Oxford-AstraZeneca vaccine uses a “viral vector,” introducing a harmless virus—in this case a virus that causes the common cold in chimpanzees—modified with the SARS-CoV-2 virus spike protein to stimulate an immune response.

Other COVID-19 vaccines in the pipeline also use the viral vector method—including one from Johnson & Johnson and Russia’s Sputnik V. This technique has already proved successful in the past, including with the Ebola vaccine. The mRNA vaccines, on the other hand, are the first using that approach to receive authorization.

While the U.K.’s decision to use the vaccine is significant, Cowling, the HKU epidemiologist, says other countries may wait to begin administering it until after the European Medical Authority (EMA) or the U.S. Food and Drug Administration (FDA) grant authorization—both of which are seen as more stringent than the British regulator.

One EMA official yesterday told Belgian newspaper Het Nieuwsblad that AstraZeneca has not even submitted its vaccine for a regulatory consideration yet, adding that approval in January wasn’t likely.

In September, AstraZeneca and Oxford halted trials in the U.K. after a volunteer experienced an unexplained illness—but did not announce the pause until it was reported in the news media. U.K. regulators gave the OK to continue trials days later.

However, the New York Times reported that U.S. regulators at the FDA were not notified of the pause and taken aback by the news. It took almost seven weeks before regulators allowed trials to resume in the U.S.

The company said it maintained the highest standards during clinical trials and reported the dosing issue to authorities when it was discovered. U.K. regulators signed off on a plan to continue the trial with the half-dose participants. However, the group that received the half dose was too small and included no patients over age 55—meaning no firm conclusions could be drawn. On Wednesday, British regulators authorized the use of two full doses, administered four to 12 weeks apart.

Despite these questions, Fletcher at the London School of Hygiene & Tropical Medicine says the dosing question should not delay approval by the FDA and EMA—both regulators were only considering authorization for two full doses.

Additionally, there are very little data on how long protection for the Oxford-AstraZeneca vaccine—or any other COVID-19 vaccine—will last. 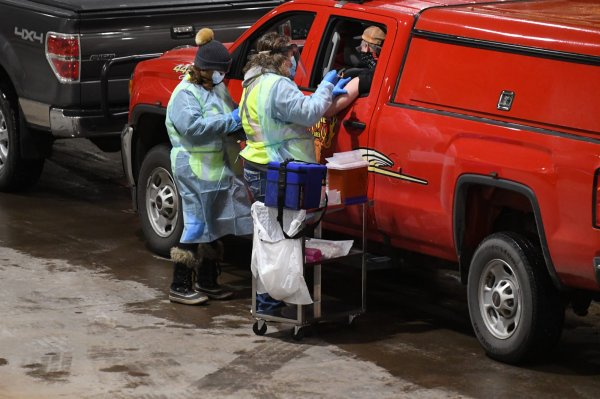 How Drive-Through COVID-19 Vaccine Clinics Could Help Inoculate the U.S.
Next Up: Editor's Pick