Millions of Americans Face Food Insecurity. The Biden Administration Must Make Helping Them a Priority

In this aerial view from a drone, people line up in their cars to receive food assistance at the Share Your Christmas food distribution event sponsored by the Second Harvest Food Bank of Central Florida, Faith Neighborhood Center and WESH 2 at Hope International Church in Groveland, Fla., on Dec. 9, 2020.
Paul Hennessy—NurPhoto/Getty Images
Ideas
By Beto O'Rourke , Matt Russell and Robert Leonard
O'Rourke leads the voter engagement organization Powered by People and is a former member of Congress from El Paso, Texas.
Russell is a Lacona, Iowa farmer and executive director of Iowa Interfaith Power and Light, a statewide, faith-based. environmental justice non-profit.
Leonard hosts a public affairs program for KNIA/KRLS Radio in Knoxville, Pella, and Indianola, Iowa. He's the author of Deep Midwest.

As 2020 draws to a close, and as we break bread with our loved ones this holiday season, we might consider turning our thoughts and prayers towards our neighbors who aren’t so lucky. In the richest country on earth, approximately 50 million Americans, including 17 million children, are suffering from food insecurity, a level of hunger in this country not seen since the Great Depression.

We don’t call them bread lines or soup kitchens like we did back then, but millions of Americans are lining up at food banks and being fed at places of worship because they can’t afford to consistently put food on their tables.

During the Great Depression President Franklin Roosevelt’s administration recognized the need for the government to step in to help feed hungry Americans and created the Food Stamp program. It was a Secretary of Agriculture from Iowa—the visionary Henry Wallace—who oversaw it and forever changed food policy in America.

While assistance to families through today’s version of the Food Stamp program, now called the Supplemental Nutrition Assistance Program (SNAP), has increased during this pandemic, given the number of hungry Americans it isn’t nearly enough. In March, states were allowed to seek waivers to allow all SNAP participants to receive the maximum benefit. The new Coronavirus relief bill increases that benefit by 15% for the next six months. But the relief bill does not significantly expand eligibility beyond some children under six, some college students, and allowing applicants to have their unemployment benefits not count as income. First, and fundamentally, Americans need food in their bellies. Expanding SNAP to more people is the way to do it.

Congress includes $13 billion in funding to support food assistance in the current relief package, but given the growing number of hungry Americans, these investments are not nearly enough. The chance for big, visionary change when it comes to family food security will come in the Biden Administration. In fact, it’s quite possible that getting it right when it comes to feeding our families is the prerequisite for getting anything else done.

Biden can advance what are the most ambitious and transformative policy goals of any modern President — on the economy, on healthcare, on climate — only if the kitchen table issues are taken care of. Leaving Americans standing in line for food boxes, putting their children to bed hungry, and choosing between rent, meals, and prescription drugs is not only immoral, but will stall any larger support for progressive policies. Using the power of government to make sure people have enough to eat is consistent with who we should be as a country.

Tom Vilsack, Biden’s choice for Secretary of Agriculture, was a champion of nutrition programs when he served in this position in the Obama administration. One of President-elect Biden’s best opportunities to demonstrate his administration’s capability to “Build Back Better,” will be by allowing Vilsack to initiate a smart, effective, and efficient buildup of SNAP.

The near-term opportunity is to expand SNAP to everyone on unemployment and others devastated by the economic free fall, including undocumented workers who are a critical part of America, our economy and our ability to feed ourselves. Add restaurants to the list of places Americans can use SNAP until the crisis is resolved and it could help support countless small restaurants that are in deep trouble as well as become another destination for farmers’ produce.

Revisions to SNAP should also include a simplification of the P-EBT program, which was intended to help families with school age children offset the loss of breakfasts and lunches while schools were closed, but has been so plagued by administrative problems that thus far no state has been able to distribute this food aid during the current school year. And we should get help to members of our military and their families who need it. Due to a technicality in the law, many military families are ineligible for food assistance despite the fact that up to 18 percent of military and veteran households have had someone seek food assistance, according to the advocacy group Blue Star Families.

While food banks are an important option of last resort, the current USDA is making them the option of first resort for millions of Americans. That’s a mistake. Our government will spend $4.5 billion by the end of the year to purchase and distribute food to food banks that are in direct competition with our grocery industry. Many of these food banks lack the capacity, staffing and systems to effectively distribute this food. Expanding SNAP would help solve the problem, cutting out the waste and redundancy in the USDA program and allowing the hungry to shop at local grocery stores instead of waiting in hours-long lines at food banks that were never designed for this kind of demand.

The depth and severity of this crisis — which affects rural and urban communities, Republicans and Democrats alike — should awaken an empathy and urgency that has thus far been lacking in many of those who represent our interests in Washington.

Vilsack has the opportunity to demonstrate to Congressional Republicans that instead of being an example of “socialism,” expanding SNAP is smart, efficient government. For every $1.00 taxpayers invest in SNAP, they get a return of more than $1.50.

SNAP has one of the lowest rates of waste, fraud, and abuse of any federal program and despite concerns held by some about the potential for moral hazard, the evidence argues that people leave the program as soon as they are able to. At a time that so many local employers are struggling, we should remember that it is delivered by American businesses. The alternative is more food lines distributing boxes filled with groceries that are determined by what’s available instead of what the consumer needs, food lines that completely bypass small businesses and farmers’ markets in our communities.

SNAP expansion also presents Biden and Vilsack with the opportunity to lead a meaningful additional investment in rural America, one that will both satisfy an urgent need (rural Americans use SNAP at a higher percentage than urban Americans) and provide economic opportunity for family farms and agricultural jobs. That’s good for our rural communities and it also happens to be good for the Democratic party’s long-term prospects in a part of America that often feels taken for granted.

Henry Wallace helped galvanize rural political support for FDR’s New Deal. Remaking SNAP to give families in need both nutrition and dignity could be Vilsack’s Henry Wallace moment, a bold move for a new administration at a time when our fellow Americans need it. 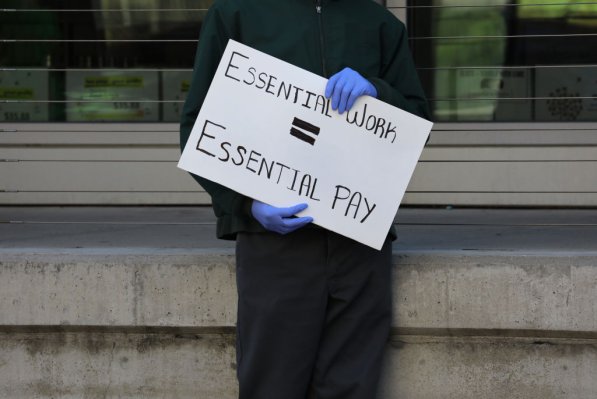 Democrats Should Focus on Economic Dignity
Next Up: Editor's Pick