Dawn Wooten, left, a nurse at Irwin County Detention Center in Ocilla, Ga., speaks at a news conference in Atlanta protesting conditions at the immigration jail, on Sept. 15.
Jeff Amy—AP
By Jasmine Aguilera

More than 40 women are now a part of a consolidated class action lawsuit against U.S. Immigration and Customs Enforcement (ICE) and Dr. Mahendra Amin, a gynecologist accused of performing unnecessary or unwanted medical procedures, including hysterectomies, on women detained at the Irwin County Detention Center in Georgia.

The class action lawsuit was filed Monday evening in the U.S. District Court for the Middle District of Georgia on behalf of 14 women, some of whom are still detained and others who have been deported, alleging Amin performed unnecessary and nonconsensual medical procedures on them as far back as 2018. Including the 14 named women, in total more than 40 women provided sworn testimony as part of the lawsuit alleging malpractice by the gynecologist, who is also under investigation by Congress and the Department of Homeland Security Office of the Inspector General (OIG) after a former nurse at the facility, Dawn Wooten, filed a whistleblower report on Sept. 14.

“This consolidated action is significant because we have been able to establish a pattern of medical abuse at Irwin,” Azadeh Shahshahani, legal and advocacy director at Project South and co-counsel on the lawsuit, tells TIME. “As part of the lawsuit we’re gonna show that ICE knew as far back as 2018 that there was medical abuse taking place.”

Read more: Biden Has Promised to Undo Trump’s Immigration Policies. How Much Is He Really Likely to Reform?

A September investigation by the Associated Press said it could not find a pattern of mass hysterectomies performed, but revealed a pattern of nonconsensual medical procedures performed at Irwin. Since the whistleblower complaint, several lawsuits had been filed on behalf of individual women who alleged experiencing medical malpractice while being treated by Amin, but a Georgia judge ordered the lawsuits be consolidated. Amin is no longer treating patients at the facility, according to the AP.

ICE spokesperson Danielle Bennett said the agency is unable to comment on pending litigation, but that it is fully cooperating with the investigation. In a previous statement to TIME on Nov. 25, Bennett said: “Any implication that ICE is attempting to impede the investigation by conducting removals of those being interviewed is completely false.”

Scott Grubman, the lawyer representing Amin did not immediately respond to TIME’s request for comment, but in a November statement to The Washington Post, Grubman said Amin denies the allegations against him. “Dr. Amin has always treated his patients, including those who were in ICE custody, with the utmost care and respect,” Grubman told the Post.

LaSalle Corrections, the private contractor that runs the Irwin County Detention Center is also named in the lawsuit. In a statement to TIME, spokesperson Scott Sutterfield said he defers comment on the lawsuit due to ongoing investigations, but added that LaSalle “continues to strongly refute any implications of misconduct at the Irwin County Detention Center,” and is “confident that independent investigative findings will strongly support our position.”

“It is well established that ICDC has a proven record of delivering high-quality, culturally responsive services in a safe and humane environment and the health and welfare of those in ICDC’s care is paramount,” Sutterfield said, adding that contractors play no part in the removal or release of detainees.

Many of the women who provided testimony in the lawsuit remain anonymous, but allege being uniformed about which surgical procedures would be performed on them, not receiving pain medication after surgery, not receiving assistance changing the bandages after surgery, receiving documents to sign in English despite not knowing English and being spoken to by Amin in English without an interpreter present, among other allegations.

One woman who chose not to remain anonymous, Jenel Haug, 35, described in the lawsuit receiving a vaginal ultrasound and internal exam with his hand as “the most medical way of being raped you could possibly experience.”

In the lawsuit, the women and their lawyers have also alleged retaliation against the women by ICE in the form of deportation or solitary confinement for speaking publicly about their experiences to media or to Congressional investigators or investigators with the OIG. The lawsuit seeks protection against any form of retaliation and a halt on deportations while the women participate in the lawsuit. In November, Georgia judge W. Louis Sands, who presides over the case, ordered that none of the women participating in the investigations be deported until February. ICE last week asked the court to reconsider that order, according to Shahshahani.

Some of the women named in the lawsuit did receive removal orders shortly after their participation in the investigations or after speaking out about their experiences with Amin, but had their deportations halted after lawyers members of Congress stepped in, according to their lawyers.

In one case, Yanira Oldaker, the lead plaintiff on the case—who says in the lawsuit that her experience receiving medical care from Amin was painful and violating, leaving her bleeding—was already on the tarmac about to board a plane to be deported to Mexico when lawyers were able to halt the removal order. TIME has reviewed Oldaker’s medical records, which include two visits with Amin. She says she has not yet spoken to investigators.

“Just because we’re detainees doesn’t mean that we don’t feel or that we don’t hurt,” Oldaker told TIME on Nov. 8, the night before her scheduled deportation. “We’re no less women than the regular people in the free world and we still deserve to have the same respect and proper medical attention.”

Oldaker is still detained at the Irwin County Detention Center.

At a Tuesday press conference, one woman detained at Irwin who shared only her middle name, Elizabeth, said that she received an injection during one visit with Amin and was told it was to address a cyst, but believes it may have been a form of birth control and wasn’t able to read documents she was asked to sign. “I don’t think this is okay,” said Elizabeth, adding that women don’t trust the staff at the detention center. “We don’t know what they’re doing to our bodies.”

Shahshahani says that though it can be difficult to know how many women may have allegedly experienced misconduct by Amin—there’s a possibility that many have since been deported—women still continue to come forward. Ultimately, Shahshahani says she wants the facility shut down.

“The women detained at the Irwin County Detention Center, along with their counterparts [not detained], literally from around the world, are making it known today that the abuse must not continue,” Elora Mukherjee, director of the Immigrants’ Rights Clinic at Columbia University, one of the eight firms and organizations representing the 14 women, tells TIME. “They are making their voices heard and they want accountability for the suffering that they and so many other women have experienced.” 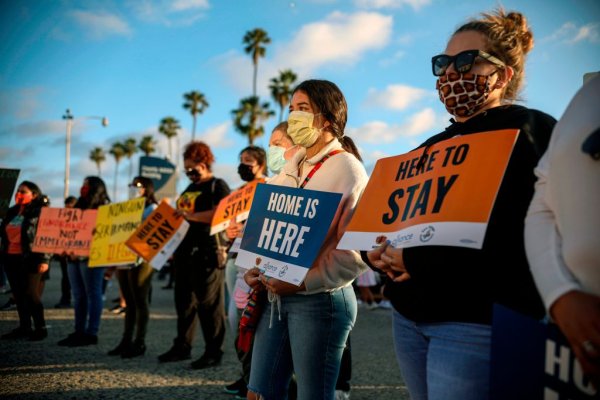 DACA Has Been Fully Reinstated. Here's Why
Next Up: Editor's Pick