In a Year Marked By Death, the Trump Administration Cements a Legacy of Unprecedented Executions

Federal prison complex in Terre Haute, Ind., on July 17, 2020. Ten federal prisoners have been executed there since July.
Michael Conroy—AP
By Madeleine Carlisle

Alfred Bourgeois was put to death by the Trump administration on Dec. 11. Like nine other prisoners who came before him this year, Bourgeois was killed with a legal injection of the drug pentobarbital while strapped to a gurney in an execution chamber at the Federal Corrections Complex in Terre Haute, Ind., where he’d effectively lived in solitary confinement for 16 years. His was the second federal execution in less than 24 hours.

In November, the Department of Justice carried out the first civilian execution in an outgoing presidency in over a century, has since completed two more in December and has scheduled three more before President-elect Joe Biden takes office in January. (On Dec. 24, however, a federal judge ruled that the date set for one of these executions had been improperly rescheduled by the DOJ, meaning it may be postponed past the date of Biden’s inauguration.) If completed, that would be the most civilian executions to occur in a presidential transition period in U.S. history, even exceeding eras when the transition was longer and the scope of the federal death penalty was broader.

The executions are out of step with a years-long decline in use of capital punishment at the state level, the suspension of state executions this summer due to COVID-19 and rising opposition to the death penalty among the American public.

In 1972, the U.S. Supreme Court ruled that capital punishment on both the state and federal level as it was being administered was arbitrary and thus unconstitutional. Four years later, however, the Court ruled that Georgia’s new procedures for capital trials had addressed many of their concerns and said capital punishment could stand if operated within the guidelines; the death penalty was quickly reinstated in most states.

The federal death penalty, however, wasn’t reinstated until 1988, and only three federal executions were occurred between 1988 and 2019, the last taking place in 2003. The hiatus since 2003 was in part because the federal government’s protocol on how to kill death row prisoners was under litigation for much of the 2000s. So in July 2019, when Trump’s Department of Justice announced its first slate of defendants to be executed, it also announced a new execution protocol using pentobarbital.

“This bought [the federal government] expedited review,” says Cassandra Stubbs, the director of the capital punishment project at the American Civil Liberties Union (ACLU). “By adopting rules at the same time [as] setting execution dates, they’re depriving courts of the chance to consider claims on a reasonable timeline.”

There are some claims that can’t be brought until an execution date is scheduled, she explains, such as a Ford claim on a defendant’s mental competency. (The Supreme Court has long held that a prisoner cannot be executed if they’re unable to understand the reason for their execution.) But the rate at which the federal executions have been scheduled, even without the added burden of a pandemic, “puts incredible pressure on the courts and incredible pressure on all the parties” to litigate such arguments, Stubbs argues.

Some executions were this year carried out before all relevant claims could be heard, she alleges, giving the example of Wesley Prukey, who was executed in July. Prukey’s legal team said he suffered from Alzheimer’s disease, but he never received a hearing on his mental state before his execution. “Lawyers were fighting until literally Mr. Perky’s last breath about how that claim was supposed to be raised,” Stubbs says.

The Department of Justice did not respond to TIME’s request for comment.

Advocates also argue that the executions have served as unnecessary COVID-19 superspreader events. Two federal death row prisoners facing execution—Corey Johnson and Dustin Higgs—have tested positive for the virus, their attorneys said Dec. 18; the New York Times reported on Dec. 21 that at least 14 men on federal death row in the FCC Terre Haute facility had tested positive. And according documents filed with Smith v. Barr, a federal lawsuit filed over conditions at the prison, as of Dec. 28 FCC Terre Haute has the most incarcerated people testing positive for COVID-19 of all Bureau of Prisons facilities in the U.S.

The Bureau of Prisons also told TIME that an employee who works on federal death row has tested positive, but claimed this individual had no contact with the executions undertaken in November and December. (BOP also confirmed “a number of inmates” throughout the Terre Haute prison have tested positive for COVID-19, adding that many “are asymptomatic or exhibiting mild symptoms.”)

Hundreds of people are typically involved in executions, and dozens typically attend, including the defendant’s family, the victim’s family, religious figures, the execution team and the media.

After Orlando Hall’s execution on Nov. 19, his spiritual advisor Yusuf Ahmed Nur tested positive for COVID-19. In response to a lawsuit filed on behalf of prisoners at the FCC Terre Haute facility, the Bureau of Prisons acknowledged that eight members of Hall’s 40 person execution team had also since tested positive for COVID-19, and at least two had removed their masks in the execution chamber. Both attorneys representing Lisa Montgomery—another defendant potentially facing execution before Trump leaves office—caught COVID-19 and said they became debilitatingly sick after visiting her in a Texas prison for her clemency petition.

State-level executions, meanwhile, were fully halted in July due to COVID-19 concerns. Seven state-level executions took place this year—a 37-year low, in part due to COVID-19 restrictions and in part keeping with a general trend of decline, says Robert Dunham, the executive director of the non-profit the Death Penalty Information Center (DPIC). In March, Colorado became the 22nd state to abolish the death penalty, and Utah and Louisiana reached the ten year mark since their last execution.

This trend meant that, for the first time in U.S. history, more prisoners have been executed at the federal level in 2020 than at the state level.

“We have never seen this kind of combination of one jurisdiction carrying out so many executions and nobody else carrying out any,” says Dunham.

A Dec. 16 Death Penalty Information Center report found that that every person executed this year, either by a state or the federal government, was either 21 or younger at the time of their crime or had “significant evidence of mental illness,” “evidence of brain injury, developmental brain damage, “an IQ in the intellectually disabled range,” or “chronic serious childhood trauma, neglect, and/or abuse.” The report also found that almost half of the people executed this year—including state and federal executions—were of people of color and 76% of executions were for crimes that resulted in the death of white victims. (Studies show Black defendants are over-represented on federal death row, and that cases involving white female victims disproportionately receive death sentences.)

Eighty two people have been sentenced to death federally since 1988, in a system that’s “been going on for over 30 years and covering tens of thousands of cases,” says Ben Cohen, counsel at the criminal justice reform non-profit Promise of Justice Initiative. “[But] there’s a handful of prosecutors, judges and defense lawyers responsible from multiple people [on death row.]”

“Those types of anomalies reveal to me that we aren’t identifying the worst of the worst,” he continues. “We’ve identified the people—being the defense lawyers, the prosecutors and the judges—who are most likely to return death sentences.” Cohen co-authored a 2010 study in the Washington Law Review that found seven districts were responsible for 40% of all federal death sentences at the time. It also identified districts had disproportionately high sentencing rates compared to larger cities with higher murder rates. The study concluded that “race and place disparities persist in the administration of the federal death penalty.”

Six people were exonerated from state death rows in 2020, according to DPIC. Each case involved prosecutorial misconduct, DPIC found. President-elect Biden has pledged to eliminate the federal death penalty once he assumes office, citing the high number of exonerees. Numerous activists and members of Congress have also called on Biden to commute the death sentences of everyone currently on federal death row to life without parole.

But before Biden even has the option, Trump plans to carry one out of his final acts in office: executing up to three more people. 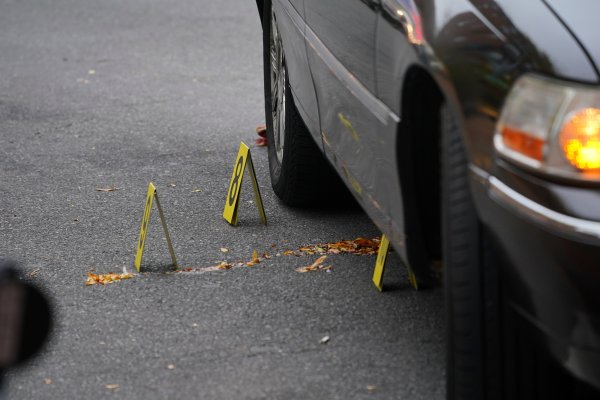 2020 Ends as One of America's Most Violent Years in Decades
Next Up: Editor's Pick