The U.S. nuclear weapons agency and at least three states were hacked as part of a suspected Russian cyber-attack that struck a number of federal government agencies, according to people with knowledge of the matter, indicating widening reach of one of the biggest cybersecurity breaches in recent memory.

Microsoft said that its systems were also exposed as part of the attack.

Hackers with ties to the Russian government are suspected to be behind a well coordinated attack that took advantage of weaknesses in the U.S. supply chain to penetrate several federal agencies, including departments of Homeland Security, Treasury, Commerce and State. While many details are still unclear, the hackers are believed to have gained access to networks by installing malicious code in a widely used software program from SolarWinds Corp., whose customers include government agencies and Fortune 500 companies, according to the company and cybersecurity experts.

“This is a patient, well-resourced, and focused adversary that has sustained long duration activity on victim networks,” the U.S. Cybersecurity and Infrastructure Security Agency said in a bulletin that signaled widening alarm over the the breach. The hackers posed a “grave risk” to federal, state and local governments, as well as critical infrastructure and the private sector, the bulletin said. The agency said the attackers demonstrated “sophistication and complex tradecraft.”

The Energy Department and its National Nuclear Security Administration, which maintains America’s nuclear stockpile, were targeted as part of the larger attack, according to a person familiar with the matter. An ongoing investigation has found the hack didn’t affect “mission-essential national security functions,” Shaylyn Hynes, a Department of Energy spokeswoman, said in a statement.

“At this point, the investigation has found that the malware has been isolated to business networks only,” Hynes said. The hack of the nuclear agency was reported earlier by Politico.

Microsoft spokesman Frank Shaw said the company had found malicious code “in our environment, which we isolated and removed.”

“We have not found evidence of access to production services or customer data,” he said in a tweet. “Our investigations, which are ongoing, have found absolutely no indications that our systems were used to attack others.” Reuters had earlier reported that Microsoft was hacked and that its products were used to further the attacks.

While President Donald Trump has yet to publicly address the hack, President-elect Joe Biden issued a statement Thursday on “what appears to be a massive cybersecurity breach affecting potentially thousands of victims, including U.S. companies and federal government entities.”

“I want to be clear: My administration will make cybersecurity a top priority at every level of government — and we will make dealing with this breach a top priority from the moment we take office,” Biden said, pledging to impose “substantial costs on those responsible for such malicious attacks.”

Russia has denied any involvement in the attack.

Hynes, the Department of Energy spokeswoman, said that efforts were immediately taken to mitigate the risk from the hack, including disconnecting software “identified as being vulnerable to this attack.”

–With assistance from Ari Natter and Dina Bass. 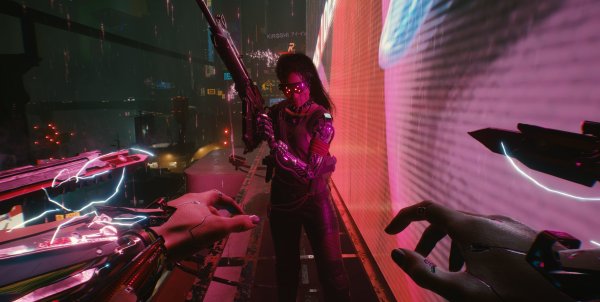 Cyberpunk 2077 Is a Mess On Every Level
Next Up: Editor's Pick