She Livestreamed the Shooting of Peaceful Protesters in Lagos. Now in Exile, DJ Switch Is Still Fighting for the Future of Nigeria

Obianuju Catherine Udeh, better known as DJ Switch, doesn’t think of herself as social media savvy. “The people that follow me know this, sometimes I’ll post a picture and forget to post another thing for several days,” says the 36-year-old Nigerian musician. But just under two months ago, it was her livestream on social media that changed her life—and that of many Nigerians.

At the time, Nigeria had been in the news for nearly two weeks as anti-police brutality protests swept the country. The leaderless #endSARS movement led to thousands taking to the streets of Lagos, Abuja and Ogbomosho, calling for an end to the SARS police unit. As the movement gathered force, DJ Switch, a Lagos resident, shared more social media posts encouraging her followers—she has more than 900,000 on Instagram and more than 220,000 on Twitter—to march in the streets in peaceful protests. “I remember taking a picture on one of the days to say to my fans: if you have the opportunity to come out, do it, if you can’t, just do it online, but whatever you do, you must speak up, because this affects all of us.”

Read More: ‘We Are Able to Get Things Done.’ Women Are at the Forefront of Nigeria’s Police Brutality Protests

On the evening of Oct. 20, things took a drastic turn. As she was peacefully protesting with others at the Lekki toll gate in a Lagos suburb, shots rang out over the crowd. She recalls seeing soldiers followed by policemen arriving and opening fire. As she crouched down to take cover and felt a bullet shell fall next to her, she instinctively pulled out her phone and started livestreaming the unfolding events on Instagram. “At that moment, I believed we would all die,” she says. “I thought, let me put this online, let people see what’s happening, and let them see where we died.”

With a group of protesters, DJ Switch ran from the scene to escape the tear gas fired on the crowd, gathering bullet shells on the way as evidence of what had happened. In the rush to leave the scene, she sustained facial injuries, but says “it’s nothing compared to the people who actually gave their lives for us.” She and fellow protesters found refuge in a nearby hospital and then a church, waiting until dawn broke.

An Amnesty International investigation later confirmed that the Nigerian army and police killed at least 12 peaceful protesters on Oct. 20 at two locations in Lagos. DJ Switch says to her knowledge, up to 15 people were killed at the Lekki shooting alone. (Nigerian authorities have denied that the army shot at protesters). The rights group has also said that at least 56 people died across the country since protests began, with security forces using excessive force in multiple cases in an attempt to control or stop the protests.

It wasn’t until DJ Switch plugged in her phone on Oct. 21 to recharge it that she realized her livestream of the violence had gone viral and been watched by 150,000 people. In the days that followed, she wanted to go back out and join the protests, but her management advised her not to do so because of safety concerns. As the days went by, DJ Switch found the continued denials from the government and the military of their involvement in the shootings “heartbreaking and demoralizing.” She then recorded a second video on Oct. 23, posted to her Instagram page, where she recounted her experience of the shootings and showed fragments of the shells that she had picked up. “There began my troubles, and me having to be where I am today,” she says.

The weeks since have been tumultuous for DJ Switch, who has left Nigeria for fears of her safety and is currently traveling between undisclosed locations. “It’s a rollercoaster ride, but I believe it’s worth it,” she says. She hasn’t been sleeping properly and has been living out of a backpack, switching between four t-shirts. Despite the uncertainty, she’s determined to uphold the truth about what happened at Lekki that night. “I know that I want to make sure that I do everything I can to get justice for those people, and it’s beyond justice now. I’m looking at a full on reform if it’s the last thing I do.”

Reform is what the #endSARS movement has been calling for since its inception in 2017, when a hashtag on social media started trending calling for the disbandment of the Special Anti-Robbery Squad police unit. Formed in the early 1990s, the mostly-plain-clothed unit was originally created to tackle an increase in armed robbery and violent crime, although in the 2000s, abuses of power became more commonplace, often targeting young men. Amnesty International reported at least 82 cases of torture, ill-treatment and extra-judicial execution between January 2017 and May 2020. Although the Nigerian government has repeatedly promised to reform the unit, citizens and rights groups say no meaningful change has happened, and officers still act with impunity. During the last wave of demonstrations, protesters called for five core demands to be met, including justice for victims and families affected by police brutality, as well as psychological evaluation and retraining for all SARS officers before they are redeployed to other units.

DJ Switch, who was born in Nigeria’s Delta State and has lived in Lagos for the last seven years, says she witnessed firsthand the brutality perpetrated by SARS officers. “I didn’t need convincing,” she says of her decision to join the protests in early October. “I could not pass up the opportunity to also put my voice out there.”

While celebrities around the world amplified the message of the protests, DJ Switch was among the most well-known figures to join the protests in Nigeria. In 2009, she was part of a group that won a reality music competition, and in 2013, she was the inaugural winner of another talent competition, the Glo X-Factor, as a solo act. Earlier this year, she received renewed attention from a musical appearance on Big Brother Naija, a Nigerian reality television series, based on the Big Brother television franchise. “I never thought anybody would appreciate the way I played, but because of the way that Nigerians lifted me up, a lot of opportunities were coming my way, and doors were opening,” she says, reflecting on the positive reception to her Big Brother Naija appearance. “I don’t know where these things stand now. Everything I worked for in my career and have been trying to build just caught fire.”

People come to the aid of a man who was wounded when security forces officers opened fire on a protest against brutality at the Lekki toll gate on Oct. 20, 2020.
Adetona Omokanye—Getty Images

DJ Switch says she tends to say what’s on her mind. “I already know that even if I have to die in poverty, I will never speak a lie about something I witnessed,” she says. “I’ve always hated injustice, I’m naturally stubborn.” But her second video detailing her experience appeared to incur the wrath of the Nigerian government, who have consistently denied that they ordered the shootings at Lekki. DJ Switch says she and her management received “credible information” that the Nigerian security agencies were monitoring her, and that there were potentially threats to her safety. She also says that an official in the government of President Muhammudu Buhari phoned her manager and was “spitting fire and brimstone” after she shared her video. Together with her management, she took the decision to flee the country. Other protesters have also been targeted too; in early November, a high court judge ordered Nigeria’s central bank to freeze the accounts of 20 people linked with the protests. Immigration officials also blocked one activist from leaving the country, and temporarily confiscated the passport of a lawyer who was helping activists, preventing her from traveling too.

Despite no longer being in Nigeria, DJ Switch is still speaking out. In early November, she spoke via video to the Canadian Parliament about her experiences, and later that month, she did a televised interview with CNN, calling Nigeria a “dictatorship with a democratic face.” In response, a senior Nigerian army general denied that DJ Switch was being targeted, and claimed that she was making her allegations for “pecuniary gains and to chase clout.” Following the interview, Nigeria’s Minister of Information and Culture accused CNN and DJ Switch of promoting “fake news”, and on Dec. 9, Nigerian President Muhammadu Buhari said that he was “disgusted by the international media coverage of the #endSARS protests,” naming CNN and the BBC.

DJ Switch says she doesn’t see a need to respond to or entertain the baseless allegations. She voices the concerns of many young Nigerians, whose frustrations go beyond the police force and who are focusing attention on corruption and government accountability in the aftermath of the Lekki shootings. In recent weeks, she’s been dedicating her time and energy to gathering evidence and on Thursday, she will speak at a virtual event hosted by Amnesty, to accompany the International Criminal Court’s 19th Assembly of States Parties.“Very soon, we will be presenting our cases in courts that matter, in courts that have the power to bring justice to powerful people. That is where my focus is.”

She never expected to be seen the inadvertent hero of a national movement, nor to have to put her life and career on hold. “It’s a country that chooses to kill its people. That is not a democracy by a longshot,” she says. “Leaders are supposed to be the guardians of Nigerians, to help us achieve the dreams we have. Now my dreams seem to have just blown up into smoke.” DJ Switch still speaks proudly of her love for music and songwriting, but the future of Nigeria now takes priority.

“I want to be grateful that I’m alive, but at the same time, I feel awkward that I’m alive,” she says, calling those who died in the protests the real heroes that Nigerians need to keep fighting for. “I will not waste this second chance to live by being a coward or hiding, even if it rips my dreams to shreds.” 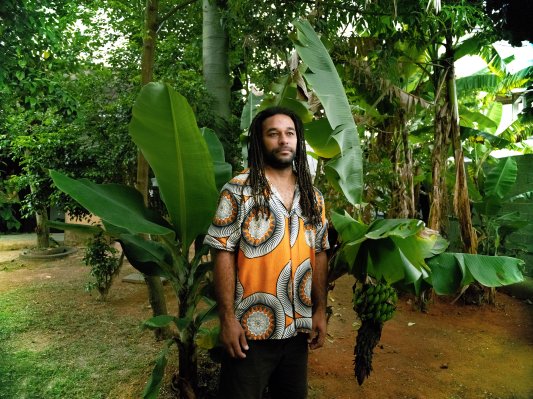