College Basketball Needs To Shut Down During The COVID-19 Pandemic

This month, two men’s college basketball coaches finally had gumption to publicly address a question on many of our minds: why are unpaid athletes risking their health and safety to play games during a pandemic, especially as COVID-cases, and deaths, rise across the country? At the outset of the pandemic in March, college basketball shut down its postseason to protect athletes. On the afternoon of December 7, University of Pittsburgh coach Jeff Capel said, “These kids are away [from their families] and they’re out and they’re laying it on the line to entertain people. Something just doesn’t feel right about it right now. The numbers were what they were back in March. I look at it every day, man. It seems like every day it’s getting worse. I don’t know why you cancel it in March, but you say it’s OK to do it right now. But what do I know?”

Capel also admitted what we’ve long known: big-time college basketball players who fuel a multi-million-dollar industry enriching so many people, besides themselves, are functioning as uncompensated professionals. “One of the things that has come about with all of this since everything happened in March when the season was canceled, I don’t think anyone can say anymore that these young men are amateurs,” Capel said. “That’s out the window. They’re not. They absolutely aren’t.”

The night after Capel’s comments, the winningest college coach of all-time, Duke’s Mike Krzyzewski, also questioned the wisdom of playing out the 2020-2021 season, as he echoed his former assistant in a post-game press conference. “I don’t think it feels right to anybody,” Krzyzewski said. “I mean, everyone is concerned … Do I think things should be done a little bit differently? Yeah. I mean, you know, a lot of kids, kids aren’t going to be able to go home for Christmas, probably a time where they should for mental health. We’re just plowing through this.”

Krzyzewski’s words drew more attention from mainstream media outlets to the issue at hand: the rank injustice of college basketball’s amateur model during the COVID-19 crisis. This disconnect between the risks that athletes are taking, and the rewards available to them, isn’t lost on current college players. The third-ranked Iowa Hawkeyes, for example, play Minnesota on Christmas Day. “We have to distance from the public and even our families to make money for our universities while we get no compensation for our labor,” Iowa point guard Jordan Bohannon told us. “It’s a disgrace and the NCAA has provided zero leadership.” The University of Michigan’s Isaiah Livers made a similar point in recent public comments; Michigan plays Nebraska on Christmas. “No knock against Nebraska but Christmas Day, I don’t think anyone wants to travel away from their place. That’s a different story we’re not gonna go into with college athletes not being paid.”

Amateurism is the foundation upon which the NCAA’s entire exploitative business model is built. Campus athletic workers can’t be paid, the story goes, because they are students, not employees, and thus aren’t entitled to the literally billion dollar revenue pulled in by the NCAA or representation by organized labor or even occupational health and safety protections. Heck, they aren’t even entitled to their own name, image, or likeness. (Though that policy seems likely to change, and the Supreme Court will hear a college athlete compensation case in 2021).

What do they get? An education at some of the world’s most expensive institutions, though many athletes are encouraged not to enroll in majors that are ‘too hard’ or classes that interfere with all-important practice. Capel’s statement matters since it comes from a coach, one of the primary beneficiaries of college basketball’s rigged economy. Economist David Berri has shown that college basketball coaches earn approximately four times the share of team revenue as their NBA coaching peers because of the prohibition against paying players. When one of the cartel’s key stakeholders makes such an admission, then, you know we’re staring at a potentially transformational shift in the dynamics of college athletics.

“Coach Capel is only saying out loud what has been true for quite some time: amateurism is a con,” say former NBA champion and Xavier University forward David West and his Professional Collegiate League partner Ricky Volante. “What the pandemic has done though is make it impossible for the NCAA and its schools to maintain the façade: money won over rhetoric. These athletes performed all of the duties of an employee without any of the corresponding protections before the pandemic too, but now it’s so obvious that even a well-paid beneficiary of the system like Coach Capel cannot maintain the fiction.”

In fact, economist Berri has calculated using revenue generated during the 2014-2015 season that if players at an elite school like Duke were paid based on their win share contribution, they would earn between $145,000-$4.13 Million per year. Meanwhile, even at a mid-major school like Wisconsin-Milwaukee, the top player that year would earn $500,000, while the average salary would come in at $82,971, well above cost of attendance at $33,738, the players’ actual earnings.

“In many ways what Capel’s gesturing to is what many of us have pointed to during this pandemic—namely that the farce of amateurism and ‘student-athletes’ as non-workers, has become even more glaring as schools have prioritized profit over safety and treated their athletes as essential workers while continuing to profit off their labor,” says Amira Rose Davis, Assistant Professor of History and Women’s Gender and Sexuality Studies at Penn State University.

What scholars like Davis have long demonstrated in academic settings has begun to pervade more influential circles. “More voices speaking up is good,” said Davis. “Comments like Capel’s are rare to hear from coaches but welcome additions to the conversation. But ultimately how much can this move the needle when there are so many invested in maintaining the current system at any cost necessary? Even as it crumbles, even in a pandemic, even when people can barely field healthy teams.”

Capel’s concerns echo those of public health professionals. Aside from the obvious risk of fatality—we have seen the death of at least one US college-enrolled athlete, football player Jamain Stephens at California University, of COVID-19 complications)—the greater threat to college athletes may be complications. In a recent story for TIME, Gavin Yamey, Director of the Center for Policy Impact in Global Health at the Duke Global Health Institute, told us: “Studies suggest that about 10% of people of any age who are infected can develop long-term, disabling symptoms that can last many months or more. This long-term illness, called ‘long-haul’ COVID, can cause symptoms like tiredness, shortness of breath, chest tightness and pain, headaches, muscle pain, and heart palpitations.”

On December 12, Florida forward Keyontae Johnson collapsed during a game against Florida State: he was rushed to a hospital, and his grandfather told USA Today he was in a medically-induced coma. Johnson is now in stable condition and even FaceTimed with his teammates on Dec. 15, his parents said in a statement released by the school. Johnson and many of his Florida teammates tested positive for COVID-19 this summer; it remains unclear whether Johnson’s condition is related to COVID.

One condition that has provoked particular concern is the COVID-19-associated heart inflammation called myocarditis, which, per JAMA Cardiology is indicated in 15% of NCAA athletes recovering from the virus. In only the most recent days, University of Miami football player Al Blades Jr. and Vanderbilt University basketball player Demi Washington both announced that they had contracted myocarditis and would be out for the season.

In the same moment that public health officials have warned against holiday travel for fear of vectoring another COVID-19 wave around the country, college basketball teams have been doing the exact opposite: hopping on planes to do precisely what we have all been warned not to. Unsurprisingly, just as the nation’s numbers soar, so too have recent teamwide outbreaks in the world of men’s college basketball. On Dec. 17, for example, University of Houston coach Kelvin Sampson said all 15 players on his team had COVID-19. Capel’s comment underline the hypocrisy inherent in asking campus athletic workers to risk their lives to entertain the masses.

Many current professional basketball players, in fact, sympathize with the college kids. “As a professional athlete I found making the decision to play overseas this year quite difficult,” Natalie Achonwa of the Indiana Fever. “I had to choose between risking my health and well-being and making a living. I don’t know how or why college athletes are tasked with making that same choice. For what? Not for the benefit of themselves.” Another challenge facing college athletes: a lack of basic labor protections. “As pros, we have a union, and we have a lot more control of what we want our future to look like,” says the Atlanta Dream’s Elizabeth Williams. “These young adults really don’t.”

Coaches who speak out, like Capel, are likely well-aware of the racialized nature of this crisis in the United States. As Nubyjas Wilborn of the Pittsburgh Post-Gazette succinctly put it, Capel “is a Black man coaching Black players knowing what this virus does to Black communities.” Due to historically-rooted systemic racial inequalities, minoritized Black, Brown, and Indigenous communities in the US have been contracting and suffering from the virus at higher rates than the majority white population. In effect, this pandemic has been experienced in the United States as a form of racial violence, no less in the world of big-time college sport.

Overall, Capel’s comments signal a dramatic change, something we should applaud. However, they’re not a cure-all. Capel did not offer a call to action. Krzyzewski’s comments did not directly take-on amateurism.

“Epiphany aside, the question is whether Coach Capel is going to do anything to change things going forward,” says West and Volante. “That’s the real problem with the leadership in college sports: talk is easy while action takes conviction, a moral compass, and the willingness to give up some money to do what’s right.”

This is something that players like former Wisconsin Badgers star Nigel Hayes have long understood. While in college, Hayes attempted to organize a player strike during March Madness to protest the punitive fiction of amateurism in the NCAA. When we asked him about Capel’s remarks, his response cut through straight to the bone. “He’s right. Pay the players,” he told us. “It’s very simple.” 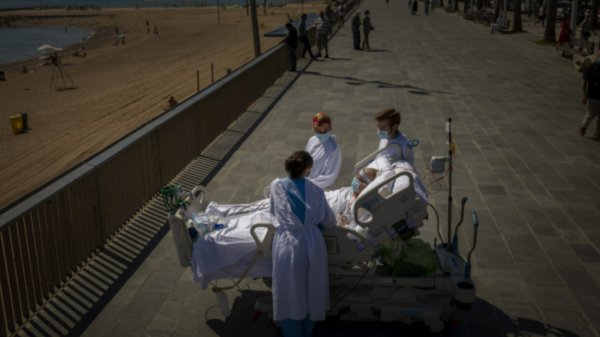