Winter Got You Down? Here's How to Combat Seasonal Blues, According to Experts

When the long summer days begin to slip away and temperatures begin to drop, it’s not uncommon to feel down in the dumps. Many may begin to feel resigned and sad as early as the fall when facing bone-chilling weather and increased isolation during the darkest time of any year, but it’s possible many more may feel affected by the challenges that this winter may bring.

“There are certain people who are susceptible to these changes when you get to the autumn and winter when the daylight gets shorter and it’s darker,” explains Dr. Norman Rosenthal, a clinical professor of psychology at Georgetown University School of Medicine who lead the team that first described SAD in 1984 at the National Institute of Mental Health.

Rosenthal, who wrote a book about the seasonal depression titled Winter Blues, says that people in winter often over-eat, over-sleep and experience loss of energy, interest and more as the days grow shorter.

“They can have difficulty in their relationships because they get socially withdrawn. They can have trouble at work because they don’t concentrate and function as well. And this can all accumulate to the point that they feel quite depressed,” Rosenthal tells TIME.

While many are able to stave off these creeping seasonal mood swings by spending quality time with loved ones or participating in activities that boost their mood, looming COVID-19 restrictions and lockdowns may make this year’s winter blues the most brutal yet. To help keep your mental health at its best, here are some possible, expert-approved ways to lift your spirits during the darkest time of year.

Lack of light is widely recognized as a trigger that affects people’s moods as they get less exposure to natural sunlight. A study of North America found that the prevalence of SAD increased the further north the subjects lived, as the hours of daylight decrease the further away one lives from the equator.

Both Rosenthal and Dr. Kelly Rohan, a professor and director of clinical training at the University of Vermont, recommend increasing your exposure to light every day, whether it’s inside or outside of your home.

Walk or do activities outside

Instead of staying cooped up at home, Rohan advises that you bundle up and get outside before those fleeting rays of sunshine disappear.

“As long as you’re not in a complete lockdown, get outside and walk, spending some time in nature breathing fresh air,” Rohan advises, adding that you should make sure to adhere to CDC and local public health guidelines.

“Seeing color in nature, like the little bit of greenery and getting direct sunlight exposure, all of these things are good for mental health. You just need to maintain a reasonable amount of distance between yourself and other people,” she says.

If you’re looking for a way to stay warm, don’t forget to add layers. Windbreaker jackets for men or women can keep the chill out of your bones outside, and a reusable face mask will help protect you and everyone around you from infection.

If going for a walk outside simply isn’t enough or you can’t leave your home, Rosenthal recommends getting your daily dose of light with therapeutic light boxes.

“Bring light into your home,” Rosenthal advises. “Use them for as little as 20 to 30 minutes in the morning, and you can start to feel a lot better.”

“Lux is a measurement of light; 10,000 lux is how much was used in the research studies that showed the beneficial effects of lux. And [the bright light therapy lamps] need to be from established companies and screen out the ultraviolet light,” Rosenthal explains. According to Rosenthal, the lights used in research studies often measure about one-foot by 18 inches. Having a larger lamp gives you more room to move around and ensures you get enough light exposure, he adds.

“I like ones that are angled down towards the eyes, they’re the most comfortable” he notes.

If you’re in the market for a therapeutic lamp, the Carex Day-Light Classic is a way to bring extra light into your life.

Many experts believe that we can often feel deflated and lethargic during the darkest time of year because of light’s influence over our sleep and circadian rhythms.

“The most popular theory is that a later dawn in the winter triggers a slower-running circadian clock that is out of sync with the dark and light cycle,” Rohan explains. “This is our central biological timekeeper in the brain that changes and regulates our body’s 24-hour circadian rhythm which includes sleep, our core body temperature and melatonin release—the hormone of darkness,” she adds.

For this reason, Rohan and Rosenthal emphasize that regulating sleep is vital to getting your winter blues under control.

If you have trouble falling asleep at night, many people take melatonin supplements, a hormone your brain produces in response to darkness, to help get them on a regular sleeping schedule. Rosenthal recommends taking between one to three milligrams at night. If you’d rather not ingest a sleeping aid, slip a lavender sachet inside your pillow covers to help you fall fast asleep.

But the Hatch Restore, one of TIME’s Best Inventions of 2020, does more than just getting you up in the morning. It’s designed to help you establish a sleep routine from the morning to night. During your waking hours, a dawn simulator helps you get out of bed and start your day. And at night, the device has a soft light to help you read and relax before bed — or you can listen to soothing, meditative sounds to gently lull yourself to sleep.

Another way to reset your circadian rhythms is to establish and maintain a routine, says Rohan. “Maintain a sense of normalcy as much as possible by following a schedule. Get up. Shower. Get dressed. Make your meals at the times that you usually do,” she advises. “Maintaining a schedule in this way can help regulate the circadian clock.”

Keeping a daily planner, for example, might help you establish a schedule and hold yourself accountable for sticking with it.

Rohan also notes that it’s important to make time to do a hobby or something that you can enjoy.

“This is really important for mental health because there’s a very strong relationship between doing fun things and mood,” Rohan says. She recommends finding simple pleasures that you can enjoy inside like playing a game or reading a book.

Reduce stress with exercise and meditation

In addition to light, Rosenthal adds that stress also has a major impact on feeling down in the winter.

“Add stress to the equation, and you will bring out the symptoms,” Rosenthal says. As COVID-19 continues to affect so many lives and communities, stress and anxiety may feel inescapable this winter. And individuals who struggle with seasonal affective disorder are particularly sensitive to life events.

“I think it’s the perfect storm because, by definition, their issue is recurrent depression,” Rohan says. “And then you couple that with a global pandemic, anxiety and very real issues that are associated with that uncertainty over jobs, finances, health, themselves and other people, and family—it’s kind of a double whammy.”

Rohan and Rosenthal recommended one easy stress-reliever that anyone can do at home: exercise.

“Exercises are a wonderful way to decrease stress and so is meditation,” Rosenthal says. Whether you’re doing an hour-long workout or a quick 15-minute session, here are some home-workouts for a long and socially distant winter, recommended by fitness experts.

Skipping rope or using non-slip resistance bands are an excellent way to get some quick movement and keep the cabin fever at bay.

Rosenthal also recommended yoga and meditation as a way to fight stress and find serenity during these turbulent times. So hit the mat for several sun salutations every day — or if you’re new to yoga and are looking for a guided practice, a monthly membership with Glo will fit your meditation and yoga needs. Additionally, if you need a comfortable way to move on the floor, Ewedoos has a great, eco-friendly yoga mat.

Read More: The Best At-Home Workouts for a Long and Socially-Distant Winter, According to Fitness Experts

If you’re familiar with the winter blues, you may know people who swear by taking a daily dose of vitamin D. With less exposure to the sun, many have equated their seasonal mood swings to a deficiency in the essential vitamin. However, there’s not a lot of data that shows that vitamin D improves mood.

“There is surprisingly little research on vitamin D and seasonal affective disorder. And most of them have a teeny tiny sample size,” Rohan says.

Most people in the U.S. have insufficient levels of vitamin D. Interestingly, researchers have noted that the groups who are at risk for vitamin D deficiency are also groups that are at risk of suffering from major depressive disorders. Rosenthal believes it’s the placebo effect of taking natural supplements and feeling healthy that lifts our spirits. While there may not be evidence of its efficacy as a mood booster, he says it can’t hurt to take a supplement.

“A lot of these vitamins may have a placebo,” Rosenthal says. “But, I wouldn’t discount it if something’s making you feel better. It certainly shouldn’t hurt you in the long run.” If you do decide to take some supplements, Rosenthal recommends having your physician monitor your levels and intake. Vitamin D supplements are relatively inexpensive and available on Amazon.

Some self-help for the winter blues is necessary, especially during a time when mental health professionals are in high demand due to anxiety around the pandemic. However, Rohan stresses that you should seek out help if you are struggling to get your depression under control.

“There are psychiatrists, psychologists, community health and mental health workers who are prepared to recommend an effective treatment because seasonal depression is very treatable,” Rohan says.

Like many other major depressive disorders, antidepressant medications that require a prescription from a physician are proven to help treat SAD. Rohan has found that certain methods of cognitive-behavioral talk therapy can be extremely effective in treating SAD, a field that she herself has developed and studied. 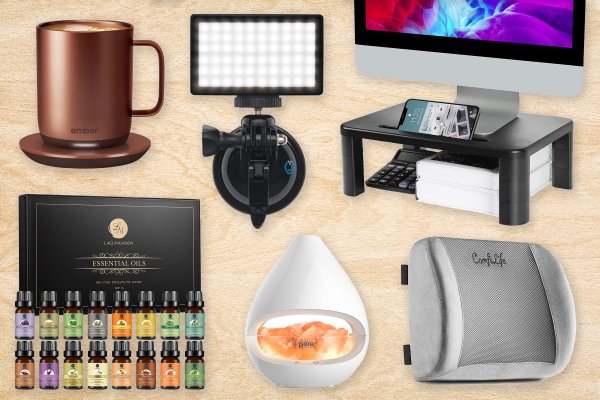 15 Ways to Make Your Home Office Comfortable
Next Up: Editor's Pick