After a Year That Pushed Us to the Brink, It's Time for Forgiveness to Go Viral

Getty Images
Ideas
By Andrew Serazin
Serazin is President of the Templeton World Charity Foundation and Chair of the Forgiveness Forum, a series of global conversations on the mental and physical health benefits of forgiveness.

It has been a rough year for the human psyche. Lurking like an iceberg beneath the official coronavirus statistics lies a dark world of hurt. Reports of increased anxiety, depression, domestic violence and suicide are only beginning to emerge. In a survey of young people in 13 countries, including Bangladesh, Philippines and Syria, over 90% of individuals reported feeling emotional distress during lockdown. The pandemic has already led to an uptick in a range of mental health disorders—from PTSD to anxiety and depression—among those on the front lines. An online survey of U.S. adults shows substantial anxiety over safety, food, or housing due to the economic impact of the virus. More recently, the highly contentious U.S. presidential election has only amplified stress levels and frayed relationships.

Right now there is a dramatic worldwide effort to create new tools to fight COVID-19. Over 200 vaccine candidates are in the pipeline, with two very promising vaccines being widely deployed in the coming weeks. New therapeutics such as monoclonal antibodies limit viral replication and blunt harmful immune responses. Yet these miraculous interventions only treat the physical ravages of the pandemic. Healing our mental and spiritual wounds will require an entirely different set of tools.

Fortunately, everyone already has access to one of the most important innovations. It is a powerful solution backed up by both cutting edge neuroscience and age-old wisdom. It leads to greater cooperation, eases conflict, increases personal happiness, lowers anxiety and is completely free. It’s called forgiveness.

Forgiveness may be especially powerful during periods of collective anxiety and increased personal stress such as we all feel right now. How should we treat a neighbor who may expose our family to the coronavirus because he refuses to wear a mask? Can we forgive a relative who voted for a different political party? How do we treat school administrators who must make challenging decisions about school re-openings? What about other parents on the PTA who disagree? Forgiveness is useful for just these kinds of situations — when unavoidable forces of a dangerous and chaotic world are threatening to tear society apart.

The good news is that in the last 20 years, the scientific study of forgiveness has exploded.

There’s lots of evidence that people with a greater propensity to forgive tend to have better health. Like any human trait, forgiveness varies across populations. But researchers are able to assess an individual’s basic disposition towards forgiveness and then correlate this with a range of outcomes. In one study, people who were more likely to forgive were less likely to enage in excessive drinking and smoking. Likewise, the disposition towards forgiveness has been associated with reductions in anxiety, depression and other psychiatric disorders. Even more surprising, individuals who forgive have a healthier cardiovascular response to stress. One study of 85 patients hospitalized with coronary artery disease found that those who reported being more forgiving had significantly lower levels of artery-clogging cholesterol. According to one leading researcher, the cardioprotective effects of forgiveness may be as large as those for beta-blockers, a common medicine for lowering blood pressure.

Now these correlation studies are interesting. But as a trained biomedical scientist, what gets me really excited are the 50-plus studies of forgiveness as an intervention. Researchers have identified the essential components in the process of forgiveness and packaged these components into practical tools that can be delivered with or without a therapist. When we design such interventions it means not only have a theoretical understanding of how something works, we also can break a complicated behavior into its component parts, study how people can get the maximum benefit, and ultimately spread those findings.

Such studies are teaching us that to fully benefit, a two-part approach is necessary. First, a person makes a commitment to forgive. You write this commitment down, say it out loud, or tell a friend about it. All of this targets cognitive and rational faculties in the brain. The second step involves thinking about what it will look and feel like to forgive. Here the process involves visualization, imagination, and storytelling. It can take the form of spoken words, a physical gift, or a letter. This second aspect is all about getting the rest of the body to follow on from the decision made in the first step. And often it is accompanied by a powerful emotional release and sense of peace. In simple terms, forgiveness involves both the head and heart.

Researchers have also clarified for us what forgiveness is not. It is not the same as justice, which is an equally important but altogether separate concept. Forgiveness also does not require reconciliation with the offending person or the repair of the relationship. Forgiveness works even when it is a unilateral action.

Like all profound concepts, we still have much to learn about forgiveness. What are the specific biological mechanisms that bring about the positive impact on health? What are the mediators and moderators of treatment success? How can effective interventions be delivered in multiple cultures and contexts? And, perhaps most importantly, how does forgiveness work between groups of people?

There are many ways forgiveness can be institutionalized in political and legal processes, ranging from the forgiveness of debt (i.e. bankruptcy) to forgiveness of children (for example through the U.N. Convention on the Rights of the Child). But right now, the evidence base is strongest as it relates to forgiveness between individuals. While we have not yet discovered the long-lost secret to healing the division between Democrats and Republicans, maybe forgiveness can help your family’s holiday videoconference be a bit brighter this year.

In a recent collaboration with the amazing positive-storytelling platform, Upworthy, Templeton World Charity Foundation found that social media content related to forgiveness—and there is a lot of it—has some very interesting characteristics. My favorite story involves a parent being instructed about forgiveness by their three-year old. The scene was a classic bedtime battle royale (something very familiar to me as a parent of young children). Everyone was frustrated and exhausted. But in the end this wise little girl said to her mother: “I forgive you…because I am tired of being mad and my heart won’t have a tummy ache.” This is the two-step forgiveness process in action!

Stories like these result in an incredible number of shares, like, and retweets. The quantitative level of engagement we see is the sort of thing that would have any brand manager jumping for joy. Second, feedback and comments on these posts are overwhelmingly positive and this positive orientation cuts against conventional notions of social media content. It is true that negative stories travel just as far, but the findings from Upworthy do indicate an alternative to the old tabloid adage that “if it bleeds it leads.” To me, these are initial hints at a unique opportunity to use the science of forgiveness to build a broader public campaign.

Whenever I speak about forgiveness, people often ask how something as basic as forgiveness can change the world. I remind them of the spectacular success of another behavioral innovation arising out of ancient wisdom. Mindfulness. While research on mindfulness didn’t get much traction until the 1980s, it is impossible to find a place today that isn’t committed to promoting the concept as key to wellness: schools, churches, the military, and corporations are all invested in it. Companies that purvey mindfulness apps are valued at billion-dollar levels. Like forgiveness, mindfulness and meditation have been shown in many circumstances to reduce stress levels, mitigate heart disease, and lower blood pressure. Can we create the same level of cultural penetration for forgiveness? Our future may well depend on it. Beset by a global plague, political turmoil, and social reckonings, it’s time for forgiveness to go viral. 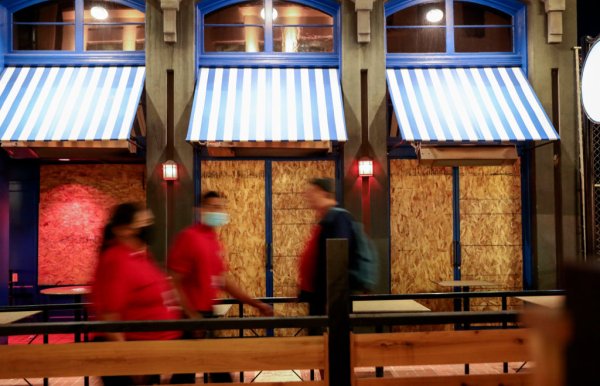 We Need to Bail Out the Cities to Save the U.S. Economy
Next Up: Editor's Pick