President-Elect Joe Biden and Vice President-Elect Kamala Harris were named TIME’s 2020 person of the year on December 10, after winning the White House with a record-breaking 81 million votes. A diverse coalition of supporters in key states, like Wisconsin, Michigan, and Arizona, helped pave their way to the White House. Here are some of the supporters who delivered their victory.

“This election…was kind of like the organizing Super Bowl, that’s what I would say a lot to my team. That’s what it felt like to me,” says Vanessa Velazquez (right), 25, field director of Detroit Action, a grassroots advocacy group that pivoted to digital organizing after the pandemic began. The organization, which focuses on addressing inequality and endorsed Senator Bernie Sanders during the primary, encouraged voters to support the Biden-Harris ticket during the general election. “There was just a common, collective urgency around this election to be engaged,” Velazquez says.

“We saw him as a champion [of] democracy and human rights globally,” says Rabih Hoblos, 64, of Erie County, of Biden. Hoblos (second from right), who is retired, immigrated to the U.S. from Lebanon in 1992. In addition to voting for Harris and Biden personally, he met with members of different ethnic groups within the Erie County community about their concerns about their futures and their children’s futures during this election. “It was very clear, from all of us, that they would like to see our President with a clear plan to restore America,” he says. Erie County, which went for Barack Obama during both his presidential runs, flipped for Donald Trump in 2016 by a small margin. Biden won it back this year.

“I felt so happy when he won, that it had been worth it to have worked for this campaign,” says Maria Orozco (second from left), 64, a furloughed porter at a Las Vegas hotel and casino. She was one of hundreds of members of the Culinary Union who knocked on 500,000 doors in Las Vegas and Reno. Over the course of this effort, canvassers knocked on the doors of half the Black and Latinx voters in Nevada. According to union leaders, COVID-19 and racial justice were the two top issues that mobilized the voters they reached to turn out for Biden and Harris. “I supported him because I want a better future for the economy, for workers, and for health insurance,” says Orozco.

“We knew Wisconsin was going to be a swing state and the last election was really disappointing for us,” says Andrea Fischer, 38, of Milwaukee County, of Moms Demand Action for Gun Sense in America. Fischer, who is the Volunteer Deputy Chapter Lead for the Wisconsin chapter, says that the group used phone banks, texting sessions, a virtual watch party, writing postcards, and chalking driveways to register voters and encourage them to go to the polls. Fischer, a mother of two, got involved with Moms Demand Action after the 2018 school shooting in Parkland, Florida; the group endorsed Biden in March of this year.

“This was the first election where they were paying really close attention,” says Eileen Force Cahill (third from right), 46, of Milwaukee, describing her daughter and her friends’ children. Force Cahill is on the board of directors for Planned Parenthood of Wisconsin, and she noted that for many people, it had never felt like there was so much at stake during an election. She added that they were particularly inspired by seeing Harris on the ticket. “Watching these girls see somebody ascend to that office and know that they could do that too, it felt really inspiring and heartwarming,” she says.

“The change really happened when the people were able to see what this current administration was doing to them during a worldwide pandemic—that it was basically playing with people’s lives,” says Tara Benally, 47. As field director of Rural Utah Project, a nonprofit that focuses on outreach to underrepresented voters, she led a group of nine organizers who drove more than 66,274 miles across the Navajo Nation, which has been hard hit by COVID-19. They registered almost 6,000 voters in Arizona and Utah, many of whom helped turn Arizona blue for the first time since 1996. “It was indigenous nations that put Biden in office,” Benally (left) says, “and there should be some return on his part because we will hold him accountable to that. No more broken promises, no more falling short of what the people need.”

“She said, ‘Don’t tweet behind a computer screen, get out there!’” says Latitia Stephens (center), 34, recalling Stacey Abrams’s 2018 campaign speech in her hometown of Cartersville, which is in a county that Trump won by 75% in 2016. Stephens says Abrams’s words inspired her to get involved in Democratic campaigns in the state. She spent months text and phone banking for the Biden-Harris campaign, focusing on health care issues. “I just wanted a leader that had empathy and looked at the facts, the science, behind this pandemic,” Stephens says. “I am very optimistic. I like the people he has around him, it makes me feel more confident.”

Read more about how Biden and Harris became TIME’s 2020 Person of the Year. 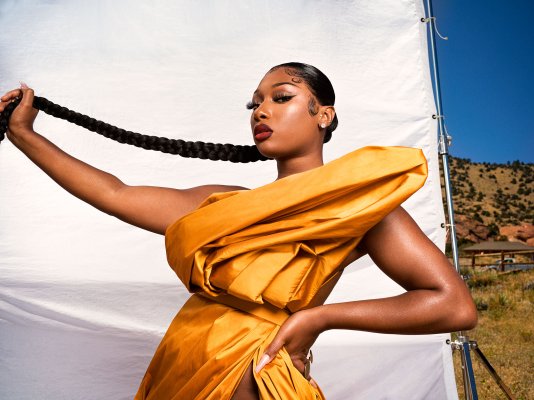 TIME's Best Portraits of 2020
Next Up: Editor's Pick