The Facebook Antitrust Case Is a Vital First Step. But More Needs to Happen

Facebook CEO Mark Zuckerberg speaks via video conference during the House Judiciary Subcommittee on Antitrust on Capitol Hill in Washington on July 29, 2020.
Graeme Jennings—Pool/Getty Images
Ideas
By Roger McNamee
McNamee began his Silicon Valley investing career in 1982. He was an early investor in Facebook and an advisor to Mark Zuckerberg. He is the author of the New York Times bestseller Zucked: Waking up to the Facebook Catastrophe.

On Wednesday, the Federal Trade Commission and the attorneys general of 48 states and territories filed antitrust cases against Facebook. The state case is broader than the FTC’s, but both call for unwinding Facebook’s acquisitions of Instagram and WhatsApp. On the heels of the House Antitrust Subcommittee report – which concluded that Facebook, Google, and Amazon are guilty of antitrust violations – and the Department of Justice antitrust case against Google, the FTC and state AG suits confirm a broad based change in philosophy relative to concentrated economic power.

Few who observed Mark Zuckerberg’s first appearance before a Senate committee in 2018 imagined that any regulators would be able to figure out the intricacies of internet platforms quickly enough to make a difference. The House Antitrust report confirmed that Congressional oversight has made the giant leap. Now the FTC and 48 states have done so. The theory of their case is as elegant as it is sophisticated. For proof of harm, the case leans on the work of legal scholar Dina Srinivasan, who demonstrated that Facebook consistently offers relatively attractive privacy terms until it achieves dominance, after which it plunders user data.

The new cases against Facebook acknowledge that industrial age concepts like market share are not the right way to measure the economic power of Facebook. If the case is successful it could bring about a vital change in how we view economic power in this country. It’s an important first step but it won’t be enough to constrain the vast powers of Facebook and other tech giants. We will need to do more.

The first test of economic power is whether there are any constraints on Facebook’s actions. Governments have imposed no meaningful constraints. Would be competitors steer clear of Facebook. Suppliers, such as news organizations, have been powerless as Facebook has used their content to siphon off their ad revenues. Advertisers know that Facebook’s user count and ad views are overstated, but are powerless to effect change. In each case, the source of Facebook’s economic power is network effects, which occur when the value of product or service increases as a function of the number of users. Network effects are a relatively new source of economic power, and Facebook has accumulated enough that no competitor can threaten it. In the absence of regulatory constraints, Facebook has been able to acquire many startups that might have threatened its market dominance. That is what happened with Instagram and WhatsApp. It happened again last month with Facebook’s acquisition of Kustomer.

The new antitrust cases will take years to resolve. Along the way, Facebook will have its days in court. Evidence from internal Facebook communications leaves no doubt that FB’s acquisitions of Instagram and WhatsApp were motivated by fear of competition. Whatever the outcome, this case should matter to every American. It may determine the degree to which economic policy will remain captive to the largest corporations. If there are no consequences for FaceBook’s willful undermining of democracy, public health, privacy, and competition, then it is hard to imagine a limit on corporate malfeasance.

Opposition to monopolies has been an American value from the beginning. Our founding fathers understood monopoly to be incompatible with the new country’s values, which emphasized democracy and self-determination. They favored distributed economic power and entrepreneurship. This idealized vision of capitalism matched the founders’ vision of democracy, as a worthy alternative to the authoritarian values of monopoly and monarchy.

The economic history of the United States has been a battle between those who favor limits on economic power and those who oppose them. Each major economic transition – from agrarian to industrial in the 19th century, from industrial to information at the end of the 20th – has disrupted the equilibrium, necessitating a new debate about economic power.

Entrepreneurial capitalism is not a natural state. It requires the government to set rules and enforce them fairly. Changes in the structure of the economy, as occurred with industrialization and the information economy, change the balance of economic power, creating a window of opportunity for concentration of economic power. The giant capital investments required by industrial capitalism led to trusts like Standard Oil, whose power rivaled that of the federal government, necessitating the first wave of antitrust laws, the Sherman (1890), Clayton (1914), Federal Trade Commission (1914) Acts. In combination with laws to protect workers, and later the social safety net created in response to the Depression, the antitrust laws ushered in a long period of widely distributed economic power.

For most of our history, Americans have understood that the government represents our interests in the battle against threats, whether they be foreign or domestic. Concentrated economic power poses a threat to democracy and self-determination, so it makes sense to regulate it.

That view lost political potency in the 1980 presidential campaign, when Ronald Reagan told us that government was “the problem.” Reagan embraced the notion that markets always do the most effective job of allocating capital and government should not interfere. In an era of high inflation and low economic growth, that message found a receptive audience. The presidents who followed Reagan embraced his market-centric philosophy. They deregulated and abandoned the philosophy at the foundation of antitrust policy. They permitted a transformation of the economy, shipping most manufacturing jobs overseas, and removing worker protections for many of the jobs that remained.

Read More: Roger McNamee’s TIME cover story about investing in Facebook and how the company lost its way

Facebook and the other internet platforms came along after laissez faire economic policies were deeply entrenched. The industry transformed the economy with a model that Harvard scholar Shoshana Zuboff calls “surveillance capitalism”, where data replaces oil as the driver of economic activity. As with the robber barons at the turn of the 20th century, internet platforms like Facebook and Google have amassed economic power that threatens democracy, self-determination, and the diversity of the economy. By amplifying disinformation about the COVID-19 pandemic, they have also harmed public health. These harms are not incidental to an otherwise legitimate business model; they are foreseeable consequences of a business model that is flawed. And that flawed business model is also employed by Google, Microsoft, and Twitter.

To date, no surveillance capitalist has been willing to sacrifice profits to limit further harm. That should not be acceptable. The rules imposed by these platforms constrain us far more than the laws where we live, they are enforced inconsistently, and there is rarely a right to appeal. They are authoritarian businesses imposing their vision on our lives. Each new feature and product reduces our autonomy. We have the right and a duty to push back.

As if undermining public health, democracy, privacy, and competition were not enough damage, Facebook continues to expand its reach and is about to reintroduce a slimmed down version of its cryptocurrency, Libra. The new “stablecoin” will enable anonymous payments, which in different circumstances might be a good thing. Given Facebook’s past behavior, one would expect Libra to foster a black market payments systems for people who want to avoid taxes and government restrictions on currency flows. Who are the losers from Libra? We are. Libra is a threat to our country’s sovereignty because it undermines democratic control of our economy.

Antitrust intervention, like this suit, is an essential tool for limiting the power of corporations, but the harms from internet platforms require more, in the form of safety and privacy regulations. Fortunately, policy makers in the U.S. and Europe are finally rising to those requirements as well. Constraining internet platforms will not be enough to restore democracy, public health, privacy, and competition, but it is the first step. 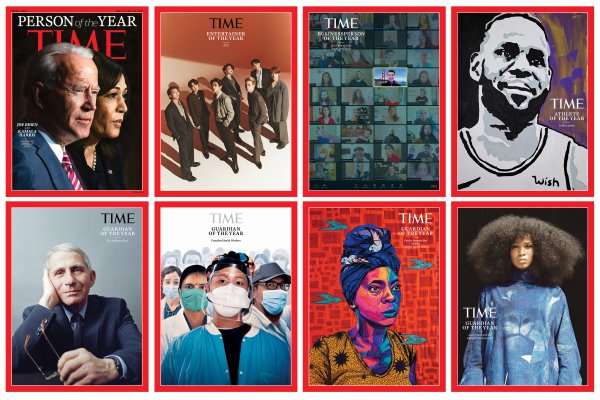 Behind the Scenes of TIME's 2020 Person of the Year Issue
Next Up: Editor's Pick